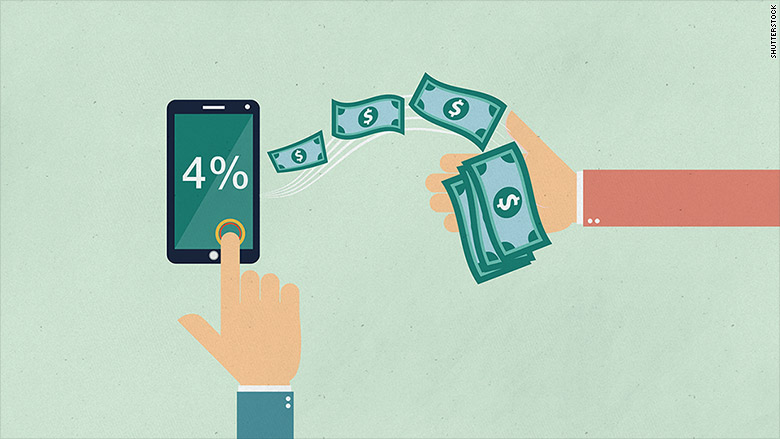 We’re all told to save as much money as possible for retirement, but how much is really enough?

For years, experts have relied on the 4% rule to help determine how much savings is truly adequate.

The rule states that if you begin by withdrawing 4% of your nest egg’s value during your first year of retirement, and then adjust subsequent withdrawals for inflation, you’ll avoid running out of money for 30 years. Not only is the 4% rule a nice idea in theory, but it’s been tested and proven successful time and time again.

That said, the 4% rule is far from perfect, so you’ll need to be cautious about adopting it. Here are three specific problems to watch out for.

1. It makes assumptions about your investment mix

The 4% rule is designed for portfolios with a relatively equal mix of stocks and bonds — specifically, 60% stocks and 40% bonds. And while there’s a little wiggle room in that formula, if your risk tolerance is such that your investments are heavily skewed toward one option over the other, it could throw everything off.

For example, if you’re the risk-averse type and have 80% of your portfolio in bonds, you won’t see the same level of growth as someone with a more stock-heavy investment mix. On the flip side, if you’re an aggressive investor with 90% of your assets in stocks, you’ll probably see more rapid growth, but you’ll also be exposed to a greater degree of market volatility, which could put your savings’ sustainability at risk if you’re forced to take withdrawals during downturns.

Of course, this isn’t to say that you should adjust your investments to align with the 4% rule’s assumptions. Ultimately, you’re better off sticking to a mix that suits your risk tolerance level and goals. Just be aware, however, that if your portfolio looks nothing like that 60%/40% split, the 4% rule may not work for you.

We just learned that the 4% rule assumes a relatively healthy mix of stocks and bonds. But the rule was also developed during the mid-1990s, at which point bond interest rates were significantly higher than what they’ve been for the past number of years.

In other words, bonds can’t generate the same sort of growth today that they could in years past, which calls the rule’s formula into question. And given that the Federal Reserve raised interest rates three times last year alone, we might see bond values begin to drop even lower.

3. It might cause you to sell your retirement lifestyle short

The 4% rule is designed to make your retirement savings last for 30 years. But some of us may not need three full decades’ worth of retirement income, especially given the number of people who are working longer these days.

During the first half of 2017, 19% of 70- to 74-year-olds were still employed. That’s roughly 8% more than the number of employed adults in that age group back in the mid-1990s, when the rule was first introduced. And while it’s always nice to be optimistic, the fact of the matter is that only about 10% of U.S. seniors will end up living until 95 — so it’s safe to say that if you work until your mid-70s, you can plan for a much shorter retirement.

Now you might be thinking: “Why not just follow the 4% rule anyway and play it safe?” The problem, however, is that by doing so, you could end up depriving yourself of certain luxuries you’ve worked hard for and deserve to enjoy as a senior.

A better way to use the 4% rule

Though the 4% rule has some flaws, it’s still a pretty good starting point to work with as far as retirement planning goes. So rather than regard it as gospel, use it as a general means of assessing your savings level. For example, if you determine that you’ll need $ 60,000 a year to live comfortably in retirement, of which $ 16,000 will come from Social Security, you’ll be left with an annual $ 44,000 gap to fill. Using the 4% rule, we can multiply $ 44,000 by 25 to arrive at a $ 1.1 million nest egg, which is what you might aim for during your working years.

Furthermore, while a yearly 4% withdrawal rate may not be ideal for you, it should give you a general ballpark of what to expect. Most folks can’t get away with removing 10% of their savings year after year, but sticking to a mere 2% withdrawal rate may not be necessary, either. The beauty of the 4% rule is that despite its drawbacks, it gives us a benchmark to work with. And that’s something most of us can use.

What you don't know about your credit card interest rates

February 27, 2018 Admin Comments Off on What you don't know about your credit card interest rates

June 21, 2017 Admin Comments Off on Here's a new reason to work fewer hours

How can I grow my retirement savings without too much risk?

October 27, 2016 Admin Comments Off on How can I grow my retirement savings without too much risk?