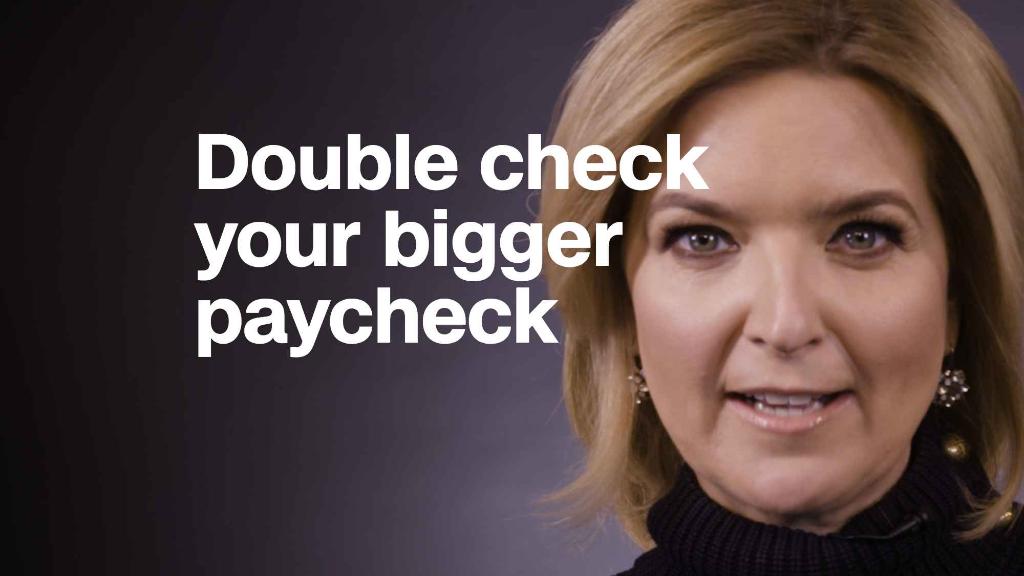 Why you should double check your bigger paycheck

Republicans have been heralding how Americans arealready benefiting from their new tax law. However, CNNMoney readers were not very impressed with the small bump they recently received in their paychecks — if they saw an increase at all.

House Speaker Paul Ryan got lambasted last weekend for celebrating a secretary’s $ 1.50 weekly increase that she said she’ll use to pay her Costco membership. He quickly deleted the tweet, but not before being called out on social media for giving much more in tax cuts and other perks to corporations and wealthy Americans.

Many of the more than300 readers who responded to our query said they are only getting a couple of dollars more in their paychecks, too little to make a meaningful difference in their lives. Some said the increase would barelycover a cup of coffee or pay for an extra tank of gas a month. Others told CNNMoney they would use itto help offset increases in their health care premiums and other bills. A few said that they’d donate it to the Democratic Party.

Some readers were grateful for the extra funds, which they plan to use to pay down student loans, add to their retirement accounts or purchase things they’ve wanted for a while.

Workers are starting to see these changes in their take-home pay as employers begin using the new IRS income tax withholding tables. However, just how much taxpayers will ultimately owe next April will depend on many factors.The law made big changes to the tax code and workers may want to consult with a tax adviser or use the new withholding calculator the IRS plans to release at the end of February.

Here’s what some CNNMoney readers say theyplan to do with their additional funds:

Pay off my student debt: Chloe Totten, who works for a publishing company and is earning a master’s degree in business analytics at Indiana University, said theextra $ 30 that appeared in her paycheck last Fridaywould make a “very small difference” in her life.

She feels Americans are getting “small peanuts” compared to how corporations will benefit, plus she’s concerned it will harm the country long-term since the federal government will have less money.

Still, the 28-year-old, who has accumulated more than $ 50,000 in student debt, says she plans to usethe newfound funds to help pay off her loans.

“It’s not really making a dent, but anything helps,” said Totten, of Bloomington, Indiana, who expects to shell out $ 700 a month for her loans after she graduates in December.

Her husband, Matt Armstrong, a software engineer, saw a $ 40 increase in his biweekly check, which she says they will put towardbuying a house.

Related: Here’s how much paychecks may go up this month under new tax law

Send our son to a nicer summer camp: Jason and Valerie Lohr were thrilled to discover they’ll receive an extra $ 410 a month between them. He works for a small business that makes team uniforms. She recently got a job as a human resources manager for a law firm.

The extra cashwill help the Nottingham, Maryland, coupleafford to send their son, Drew, 12, to a nicer summer camp and let him attend for a longer period. And they hope to splurge on a weeklong vacation to San Francisco, instead of their typical getaway to Wildwood, New Jersey.

“I didn’t think it was something that would have affected me that greatly,” said Jason Lohr, 40.

Sock it away for retirement: Celeste Becia was surprised to see a $ 100 increase in her most recent paycheck — she thought it would be less. The IT business analyst is squirreling the money away in a Roth IRA, as is her husband, who received a similar boost from his job as an electrical engineer.

Becia, 57, opted for a tax-sheltered retirement account because she thinks tax rates will have to go up in the future. (The tax bill is expected to increase the deficit by more than $ 1 trillion over a decade.)

Overall, she feels the GOP tax law will hurt the nation more than it helps. Companies will direct a vast majority of their savings towards buybacks that benefit shareholders, with only a small share going towards wage and benefit increases. Also, future generations will have to contend with bigger deficits, she said.

“It will help people the most who have the most,” said Becia, who has four children and lives in Boise, Idaho. “I consider myself one of those people. But it won’t help my kids.”

Related: How much do corporate tax cuts help workers?

Cover higher bills: Bob Jahn doesn’t know how much he’ll receive from the tax law yet, but he says whatever he gets will go towards paying his ever-increasing utility bills. His cable billalone is going up by $ 12 a month, starting in March, he said.

The retired middle school teacher said he doesn’t feel the tax cuts will leave him any better off, though the rich will likely benefit. Also, he’s concerned the federal government won’t have enough money to pay for needed social services and education.

“The rich spend it on boats and cars and things they don’t need,” said Jahn, 61, of Edinboro, Pennsylvania. “The middle class spends it on bills — if they are smart.”