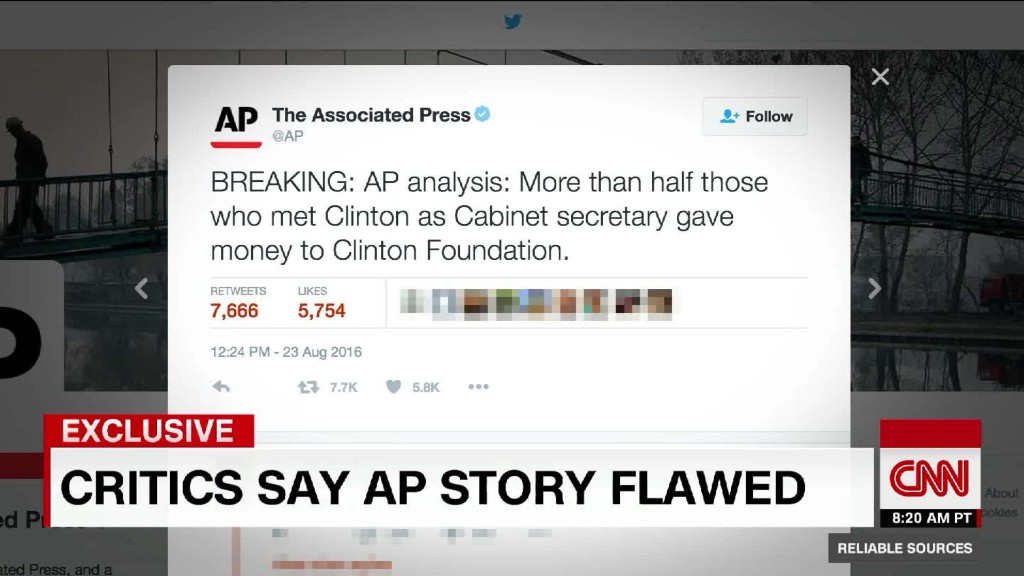 Associated Press Executive Editor Kathleen Carroll is defending her organization’s controversial investigation into meetings Hillary Clinton took while Secretary of State — but she admits a tweet the AP sent out about its story was “sloppy.”

“I do think it’s interesting,” Carroll said of the AP’s investigation and its findings during an interview with Brian Stelter on CNN’s “Reliable Sources” Sunday. “We didn’t say it amounted to the end of the world, we said this is an important and interesting thing that people should know about, Clinton’s tenure in the highest office that she’s ever held, Secretary of State. Who did she meet with? Who are those people?”

The investigation, and an article the AP published about it, came under scrutiny this week.

In examining people Clinton had met with during her tenure at the State Department and how many of them had given to the Clinton Foundation, the AP had excluded those with whom Clinton would be expected to meet as Secretary of State — U.S. government employees and officials from foreign countries, for example. Critics charged that this painted a misleading picture of how much priority Clinton gave to the foundation’s donors.

That was especially true of a tweet the AP sent promoting its story, in which it did not disclose the meetings it had left out of its calculations.

BREAKING: AP analysis: More than half those who met Clinton as Cabinet secretary gave money to Clinton Foundation.

“We’re a lot better at breaking stories and covering news and gathering video and taking photographs than we are on tweets,” Carroll told Stelter. “This one could have used some more precision.”

However, asked if that meant she regretted the tweet, Carroll said, “No. If we felt it was wrong, we would have taken it down right away.” Pressed again, she said, “I think it was sloppy.”

Carroll did defend the story itself, though, and put some of the blame on the Clinton campaign and the State Department for not being more forthcoming with Clinton’s schedule as Secretary of State and for not answering questions about the investigation’s findings.

“We ask them questions, they are unresponsive,” Carroll said. “They had been unresponsive from the State Department until we sued them to get the documents, so you know we’re glad to have plenty of conversations with people about that.”

She added: “Anything they want to say to us that we can include in the story that would help illuminate their point of view, we’d be glad to include.”

Europe is falling apart. Saving it won't be easy

January 20, 2017 Admin Comments Off on Europe is falling apart. Saving it won't be easy

November 30, 2016 Admin Comments Off on Oil prices surge on optimism over OPEC deal