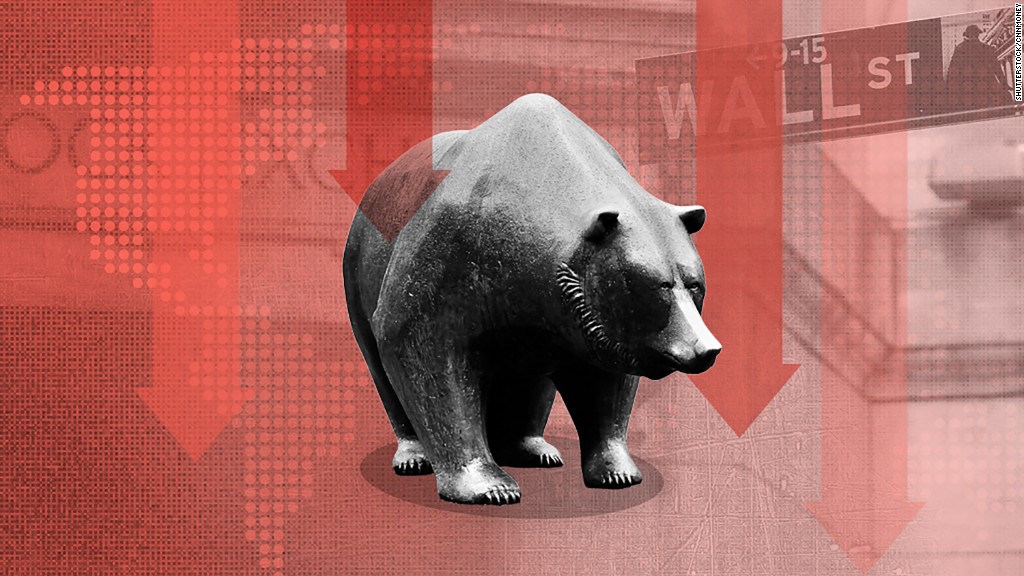 Be careful what you wish for.

Now comes the hangover. Investors are remembering that giving lots of medicine to an already healthy economy can have side effects, namely inflation.

Those inflation fears are suddenly rocking Wall Street. They sent the Dow plummeting 1,800 points in just two trading days. The losses wiped out a quarter of the gains since Trump’s election.

For months, investors basically ignored the threat that the tax cuts might backfire, causing bond yields to spike and raising the likelihood that the Federal Reserve will have to raise interest rates faster to fight inflation.

“We have an infinite capacity for self-delusion as investors,” said Bruce McCain, chief investment strategist at Key Private Bank. “When we feel good, we don’t want to be bothered by reality.”

Market analysts warned investors about this. In the fall, Morgan Stanley predicted that enacting aggressive tax cuts risked “overheating” the economy and causing stocks to “boom then bust.”

Stocks definitely boomed. The Dow spiked 45% between Trump’s election and its all-time high less than two weeks ago, after the tax cut was enacted.

But economic growth has been accelerating, and U.S. unemployment is the lowest in 17 years. So borrowing money to stimulate the economy wasn’t required.

And, as outgoing Federal Reserve Chairwoman Janet Yellen warned in December, it could leave Congress less ammo to help the economy when times get tough again.

Trump argued that there was an economic, not political, rationale behind the tax plan.

“We desperately need tax cuts to put our people back to work,” Trump told reporters on October 25.

The bust in stocks may be happening now. The markets are flirting with a “correction,” a 10% pullback from recent highs.

Wall Street has been freaking out about the normally boring bond market. 10-year Treasury yields have surged from 2.4% at the beginning of the year to as high as 2.85% this week. When investors can get better returns from bonds, risky stocks look less attractive.

The bond market is anticipating greater government borrowing to pay for the tax cuts. To borrow money, the government sells Treasuries, and yields have to rise to drum up interest.

Another reason yields are rising: the threat of inflation from overstimulating the economy.

Concern about inflation wasmost glaring on Friday, when stocks tanked after the January jobs report revealed the strongest wage gains since 2009. Businesses are having trouble recruiting and keeping talented workers, forcing them to pay more.

All this is great news for Main Street after years of lackluster pay gains. But Wall Street is suddenly worried about the “goldilocks” environment that had long propped up stocks.

Steady growth and mysteriously low inflation were great for stocks because they kept corporate profits high and allowed the Federal Reserve to raise rates at just a gradual pace.

“When you shovel stimulus in at the peak of the cycle, the market starts to worry about a sudden and unexpected rise in inflation,” said Nicholas Colas, co-founder of DataTrek Research.

McCain said there was a threat all along that the tax cuts would overheat the labor market.

“That just begs for a round of inflation that brings this whole party to an end,” he said.

Worries about inflation could force the Fed to cool things off by raising rates more aggressively than investors had been bracing for. If new Fed chairman Jerome Powell moves too fast, it will further rattle a stock market that has been addicted to extremely low rates.

“The real risk has been that the economy will overheat,” said Greg Valliere, chief global strategist at Horizon Investments. “Finally, the bond market realizes that things are heating up: deficit, inflation and wages.”

Related: This is why the Dow is plunging

It’s too early to say whether the tax cuts really did overheat the economy.

It’s possible the market is overreacting to early signs of inflation. Perhaps the anemic price increases that have characterized this recovery will return. In that case, the market may be experiencing a healthy pullback before going on to new all-time highs.

For its part, the White House is still hyping the tax cuts, Trump’s signature legislative achievement.

“The President’s tax cuts and regulatory reforms will further enhance the U.S. economy and continue to increase prosperity for the American people,” the White House said in a statement following Monday’s market plunge.

May 27, 2017 Admin Comments Off on Mark Zuckerberg supports universal basic income. What is it?