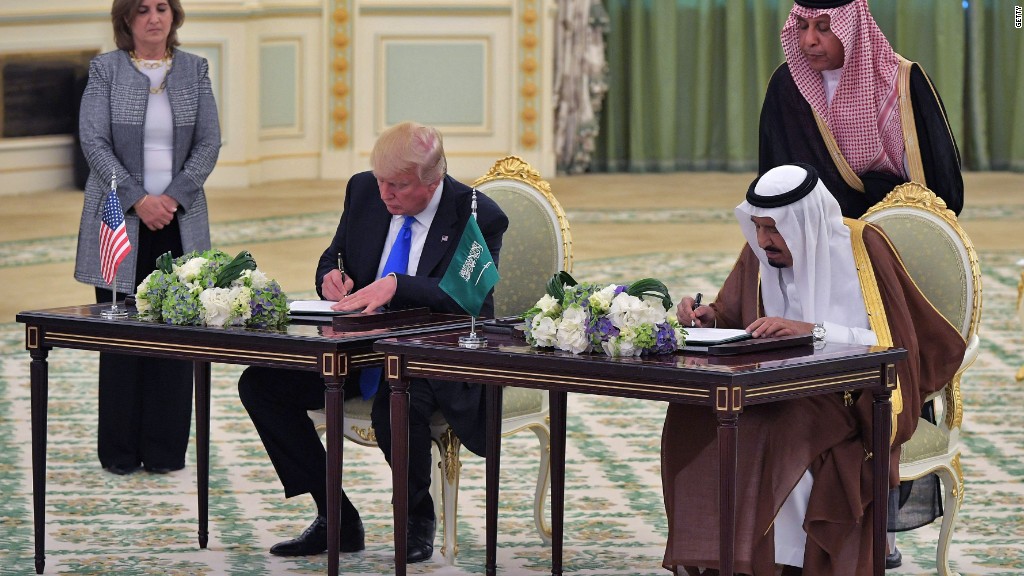 Several well-known American defense contractors got a big lift Monday thanks to new deals by the Saudi Arabian government to purchase weapons, ships, aircraft and other military equipment in the wake of President Trump’s visit to the kingdom.

Lockheed Martin(LMT) said on Saturday that Saudi Arabia was spending more than $ 28 billion on missiles, radar defense systems and 150 S-70 Black Hawk helicopters, among other things.

Raytheon, Boeing and General Dynamics also announced deals with the Saudi government. Financial terms of those specific deals were not disclosed.

But the White House said that Saudi Arabia would be spending $ 110 billion on defense contracts as part of a broader deal signed by Trump and Saudi King Salman during the visit.

Defense stocks have been skyrocketing for the past year, largely on the expectation that defense spending would continue to increase in the US even if there were federal budget cuts elsewhere.

That was the case even when many on Wall Street thought that Hillary Clinton would be the next president. She was widely thought to be hawkish on military spending due to her record as a US Senator and former Secretary of State.

But Trump’s win has kicked the defense sector into an even higher gear.

Boeing, which also makes commercial jetliners (and Air Force One) is up 18% this year, making it one of the top stocks in the Dow.

Fellow Dow component United Technologies(UTX), whose Pratt & Whitney unit makes engines for many military planes is up more than 10% year-to-date, as are Raytheon, Lockheed and General Dynamics.

Aslam said Trump is likely to continue to push for more big defense contracts from foreign governments since that will allow him to tout job creation in the process.

“The jobs market is his biggest baby,” Aslam said.

To that end, the White House noted in a blog post about the meeting with King Salman that the deal is “expanding opportunities for American companies in the region, potentially supporting tens of thousands of new jobs in the United States.”

And White House Press Secretary Sean Spicer lauded the deal in a tweet as the “largest single arms deal in US history.”

It’s also no secret that Trump’s proposed federal budget will be good for the defense sector as well.

While Trump is expected to propose cuts to various domestic social safety net programs like food stamps and Medicare, the preliminary budget from March earmarked a $ 54 billion increase for spending at the Pentagon.

November 18, 2016 Admin Comments Off on Stocks: 5 things to know before the bell

A 20% Mexico tariff would pay for the wall. But it would hurt Americans

January 27, 2017 Admin Comments Off on A 20% Mexico tariff would pay for the wall. But it would hurt Americans

Premarkets: 6 things to know before the bell

April 26, 2017 Admin Comments Off on Premarkets: 6 things to know before the bell