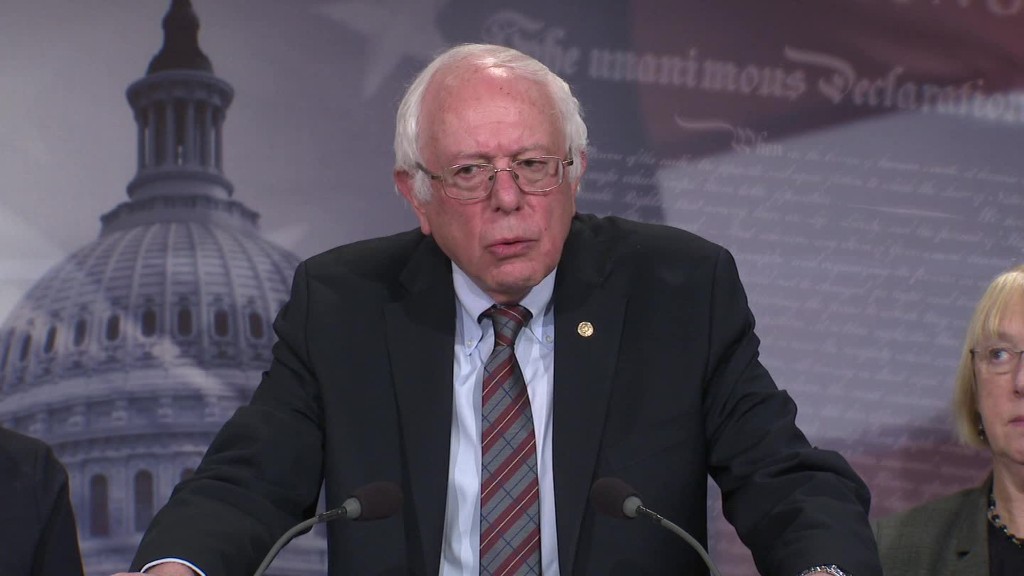 It’s time for paid family and medical leave in the U.S.

That’s the message a group of Democratic Senators had for President Donald Trump on Tuesday.

The lawmakers, which included Senate Democratic Leader Charles Schumer and Senators Kirsten Gillibrand and Bernie Sanders, called on the president to support proposed legislation that would set up an insurance fund to offer paid leave for working Americans.

The FAMILY Act, which Gillibrand introduced in Congress earlier this year, would create a nationwide insurance program that offers up to 12 weeks of leave for family and medical purposes with partial pay.

“No working American should ever have to choose between earning their paycheck and actually providing for that urgent family need,” said Gillibrand during the press conference Tuesday. “But unfortunately that is a very real choice that parents and family members have to make every single day throughout their careers.”

The insurance fund would provide workers up to 66% of their wages for three months to help care for a new child, a family medical emergency or a serious personal injury.

The program, which would be created within the Social Security Administration, would be funded by employer and employee payroll contributions.

The lack of paid leave costs the U.S. economy roughly $ 21 billion a year, according to Gillibrand, who added that the cost of her program would be $ 2 a week for workers and employers.

“We can all afford to pay the cost of a cup of coffee a week to have this national paid leave plan in place.”

Related: How paid family leave could become a reality in the U.S

Trump proposed a plan during the campaign that would allow new mothers who don’t get paid leave from their employer to collect six weeks of unemployment benefits.

Hillary Clinton detailed a plan that would guarantee 12 weeks of paid maternity leave with at least two-thirds of a worker’s current wages, up to a limit.

In his first address to a joint session on Congress in February, President Trump said he wanted new parents to have access to paid family leave.

“My administration wants to work with members in both parties to make childcare accessible and affordable, to help ensure new parents have paid family leave…” he said.

The U.S. is the only developed nation that doesn’t mandate a formal paid leave policy for new mothers.

“What kind of society are we when we tell a woman she cannot love and nurse and be with her baby because she has to get back to work immediately in order to earn enough income to take care of her family?” said Sanders.

While some companies, mainly in the tech world, have beefed up their parental leave offerings recently, many workers are not offered paid family or sick leave.

The existing Family and Medical Leave Act, commonly known as FMLA, allows eligible workers to take 12 weeks of unpaid leave following the birth of a child or to take careof a personal or family member with a serious illness.

But many families can’t afford to take unpaid leave. And many workers are not subject to FMLA.

In September 2015, more than 200 business school faculty members sent a letter to Congress, urging them to adopt a paid family and medical leave policy. In the letter, the group claims less than 60% of workers are eligible to take leave under FMLA.

Gillibrand said she has reached out to Republicans and the administration on paid leave, but called the president’s campaign maternity leave plan a “non-starter” because it’s not gender neutral.

“Trump ran on a paid leave [plan] that was entirely unacceptable,” she said. “It was not gender neutral, which is a huge challenge that would not actually deal with the problem.”

CNNMoney’s Jeanne Sahadi and Heather Long contributed to this report

How the typical American family pays for college

June 30, 2016 Admin Comments Off on How the typical American family pays for college

Tax law, bonuses and raises: 5 things you need to know

February 24, 2018 Admin Comments Off on Tax law, bonuses and raises: 5 things you need to know