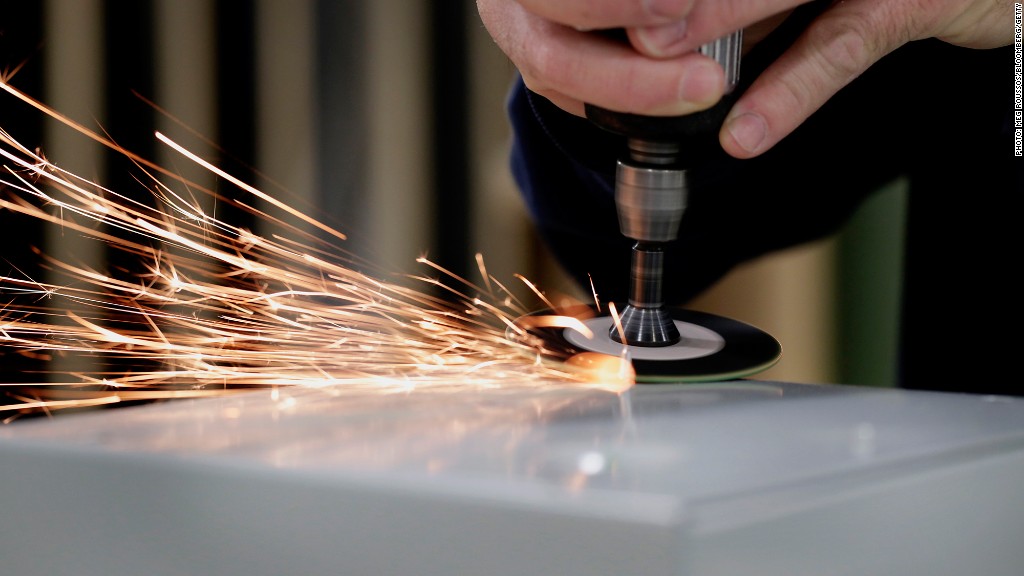 “The great American middle class is disappearing. One of the factors driving this economic devastation is America’s disastrous trade policies,” Trump wrote in a new op-ed in USA Today.

He says he’ll use his deal making skills to turn America back into a winner in trade with China, Mexico and others.

But business leaders and economists from both sides of the aisle warn Trump’s idea to slap hefty fees on Chinese and Mexican imports — as much as 45% — would be disastrous for the economy.

Here’s a rundown of Trump’s key arguments on trade. Exit polls show the issue is winning Trump votes. He hopes it will lead to victory in Ohio in a close matchup with Governor John Kasich.

Related: Donald J. Trump ties and suits are made in China

“The American worker is being crushed” by trade, Trump says. As proof, he cites research from the left-leaning Economic Policy Institutethat found America has lost 900,000 jobs to Mexico since the North American Free Trade Agreement was signed in late 1993.

The job losses are the subject of a huge debate. Other research by the right-leaning U.S. Chamber of Commerce says 5 million U.S. jobs have been created because of NAFTA.

Regardless, this discussion ignores the impact of technology and innovation on traditional middle class jobs.

“Trade is a factor, but technological change has been more important,” says Robert Lawrence, professor of international trade at Harvard’s Kennedy School of Government. Computers and robots are replacing manufacturing jobs. The predictions are that even more positions — including “highly skilled” ones — will be replaced by robots in the coming years.

In his op-ed, Trump argues that states like Ohio have been especially hard hit by trade. “An Economic Policy Institute analysis found that Ohio has already lost more than 100,000 jobs to Trans-Pacific Partnership countries,” he writes.

Here’s the catch: Ohio has a 4.9% unemployment rate, meaning the state is basically at full employment. While it’s true that some jobs have been lost, others are being created. For example, Ohio has benefited from America’s energy boom and a resurgence of steel jobs to make the pipes to transport natural gas.

Related: How Donald Trump could cause a recession

Trump solution is to renegotiate trade agreements (the U.S. currently has 20 free-trade deals in place) and put taxes (known as tariffs) on Chinese and Mexican imports.

The idea is to make Chinese and Mexican goods more expensive so companies will start manufacturing in the U.S. again.

The problem is China and Mexico aren’t likely to send Trump a thank you note. They would probably retaliate by putting taxes on U.S. goods coming into their countries. It could cause a global trade war.

“His plan to put on a 35% tariff on goods imported would sink this country into a recession. It would penalize global companies that are trying to be competitive globally,” HP Enterprises (HPE, Tech30) CEO Meg Whitman, a prominent Republican, said recently.

The American Action Forum, a right-leaning think tank, estimates that Trump’s tariffs on China would cost Americans an average of $ 675 per person a year. (The Mexico tariff would cost over $ 100 a person).

Related: The Trump business that failed in two years

Trump has a big warning about the future: “The situation is about to get drastically worse if the Trans-Pacific Partnership is not stopped. One of the first casualties of the TPP will be America’s auto industry, and among the worst victims of this pact will be the people of Ohio.”

He points out that his rivals for the Republican nomination — Gov. Kasich, Sen. Ted Cruz and Sen. Marco Rubio — all support TPP.

TPP is a trade agreement that’s been years in the making. It would create a free trade zone around the Pacific Ocean, bringing together 12 countries that account for 40% of the world’s economy. China is not part of the agreement, so the deal could help contain China’s economic influence.

There’s a lot of debate about whether TPP will help or hurt U.S. jobs and businesses. Much like with NAFTA, there will likely be some industries that benefit and some that are hurt. The U.S. auto industry is actually expected to be one of the winners from the deal.

Bashing trade is helping Trump win votes. But both Republican and Democratic experts warn his plan to “fix” trade deals could cause an economic war that leaves Americans even worse off.

What is the WTO, and how does it work? Here's what you should know

March 12, 2018 Admin Comments Off on What is the WTO, and how does it work? Here's what you should know

Getting deported was the best thing that ever happened to me

June 25, 2017 Admin Comments Off on Getting deported was the best thing that ever happened to me