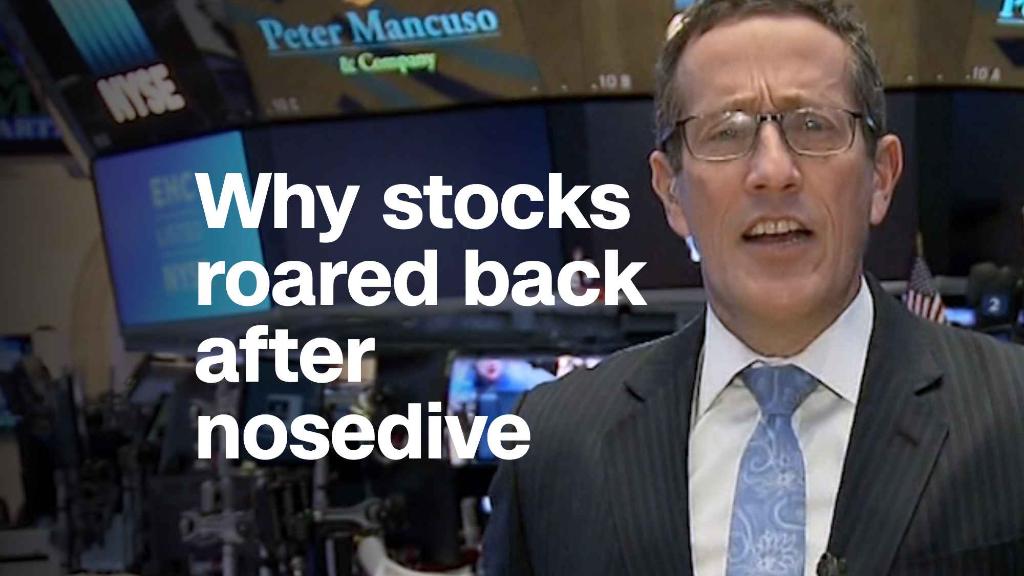 Why stocks roared back after nosedive

Wall Street could be in store for another bumpy ride.

Dow futures dropped about 150 points on Wednesday morning as the volatility that has rocked markets for more than a week lingers. The premarket losses signal a decline of about 200 points at the open.

The mood has calmed down a bit though after Wall Street staged a dramatic turnaround on Tuesday. After sinking 567 points early in the day and stumbling into correction territory, the Dow ended the day with a mirror image gain of 567 points.

The powerful bounce has given hope to the bulls that the market has begun to find a bottom after a period of extreme selling in recent days.

Related: Did this little-known investment make the selloff worse?

But Wednesday’s premarket retreat signals that the rebound may be fragile.

“Global markets are breathing a huge sigh of relief after a late rally in U.S. stocks yesterday,” currency analysts at ING wrote in a report on Wednesday.

The question now is whether “this draws a line under the recent stock market correction or whether this is merely a dead cat bounce,” analysts wrote.

Despite the market slump, analysts believe the fundamental backdrop looks solid. Corporate earnings have never been higher and U.S. and global economic growth has gained steam.

The 10-year Treasury yield has receded in recent days and is trading around 2.77% on Wednesday.

Trump pulls his punches on China and Germany

April 15, 2017 Admin Comments Off on Trump pulls his punches on China and Germany