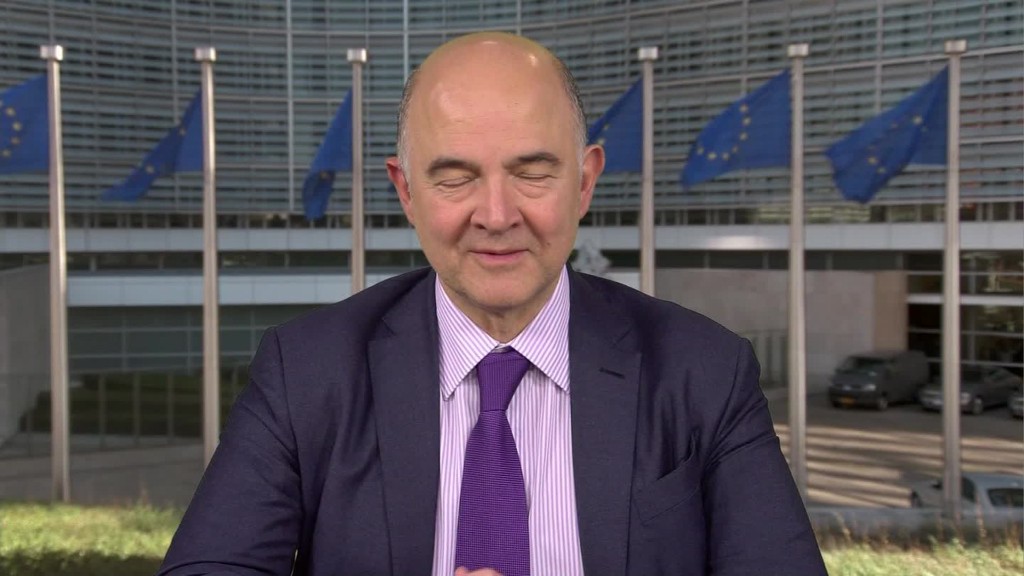 Europe is charging ahead.

The economy of the eurozone may have enjoyed faster growth than the United States in 2017, confidence is the highest it has been in decades and unemployment is at a 9-year low.

According to preliminary data from Capital Economics, the region’s economy grew by 2.4% last year, which is faster than the 2.3% the research firm expects for the U.S. Official data are due later this month.

“The latest business sentiment surveys generally point to a touch stronger growth in the eurozone than the U.S. at the moment, but the big picture is that sentiment indicators in both regions are consistent with healthy growth rates in the months ahead,” said Stephen Brown, economist at Capital Economics.

Economic confidence across the 19 countries that use the euro currency is at its highest in more than 17 years, according to a survey published by the European Commission on Monday. Other surveys indicate the same: Europeans are feeling great about the economy.

“Confidence levels surged in all surveyed sectors and industrial confidence reached the highest level since the survey start in 1985,” said Carsten Hesse, European economist at Berenberg.

Related: Greece is giving $ 1.6 billion to its austerity-weary citizens

France is shaping up to be a bright spot in 2018 — if President Emmanuel Macron can deliver promised reforms.

“France could overtake Germany’s GDP growth at some point in the not so distant future,” Hesse said. “Macron’s labor market reforms and the strong demand environment support our view that France is heading for a golden decade,” he added.

Political risks take a back seat

Europeans are feeling good despite the uncertain political climate in several big countries.

Germany has been unable to form a new government since inconclusive elections in September. Chancellor Angela Merkel is still trying to build a coalition that would avoid a fresh vote.

Still, German economic sentiment jumped to its highest since 2011, just below the record level it reached in 1990 — the year the country was reunified after the fall of the Berlin Wall.

Spain is struggling to find a solution to the crisis in Catalonia, where voters backed pro-independence parties in an election in December. Yet the country’s economic confidence is the highest it has been since early 2001.

And Italians are due to vote in elections in March that could spell more instability for the region. The economic impact of Britain leaving the EU in March 2019 is another looming uncertainty.

“We can not find any evidence, that political uncertainty in some European countries or the rise in the euro exchange rate and energy prices, are having any significant negative impact on confidence,” said Hesse.

Related: This was the year Brexit began to bite

Unemployment in the eurozone fell for the fourth consecutive month in November, to 8.7%, the lowest since January 2009. There are now roughly 1.6 million fewer unemployed people in Europe than there were a year ago.

But the recovery in the job market is uneven. The unemployment rate in Germany fell to a new record low of 3.6% in November. In Spain, it was 16.7%.

And while it is improving, Europe still has a problem with youth unemployment, which currently sits at 18.2%.

India postpones retaliatory tariffs on US goods for a second time

August 8, 2018 Admin Comments Off on India postpones retaliatory tariffs on US goods for a second time