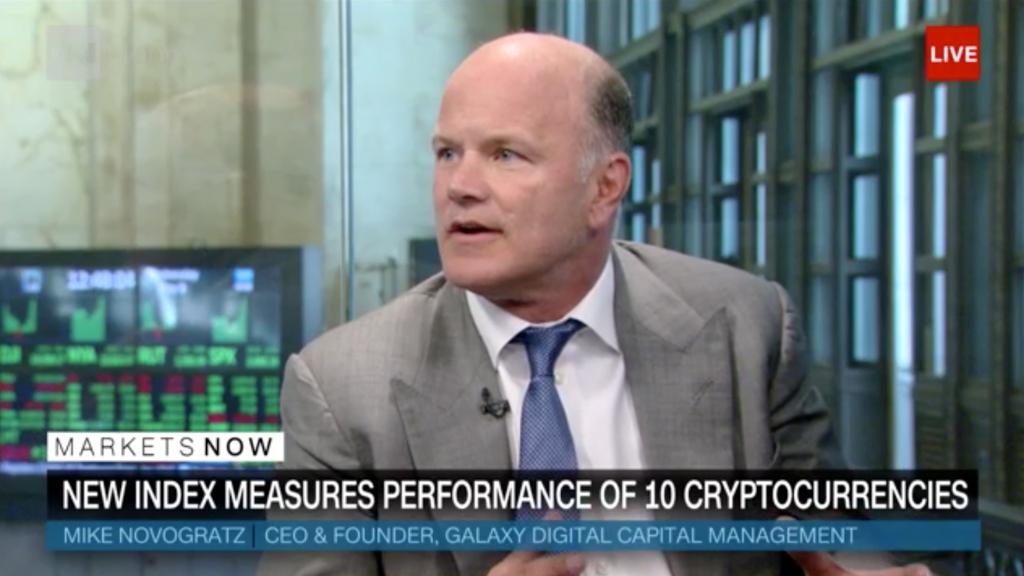 “It’s almost essential for every investor to have at least 1% to 2% of their portfolio” in crypto, Novogratz, the CEO and Founder of Galaxy Digital Capital Management, told Maggie Lake on “Markets Now” on Wednesday.

Galaxy and Bloomberg launched the Bloomberg Galaxy Crypto Index (BGCI) on Wednesday. The new index tracks the performance of 10 digital currencies, including Bitcoin and Ethereum.

Novogratz said it’s “almost irresponsible” not to invest in Bitcoin.

That’s “not necessarily because of all the gains they’re going to make,” he said, but because “these technologies in two to four years are going to give every vertical a challenge.” Novogratz was referring to blockchain, the underlying technology behind cryptocurrencies.

Blockchain allows companies to make near-instant transactions and record payment data from anyone who uses the service.

“I’m not saying that the decentralized version of Uber will be Uber,” he added. “But it’s going to be a challenge, and it’s got a real value proposition.”

Novogratz, formerly a hedge fund manager at Fortress Investment Group and Goldman Sachs partner, said in 2017 that he invested 10% of his net worth in digital currencies.

Related: Why Nasdaq’s CEO is bullish on cryptocurrencies

Traditional financial institutions are looking for ways to help traditional investors bet on Bitcoin. In April, Nasdaq announced a deal with cryptocurrency exchange Gemini Trust. But it’s not clear how governments plan to regulate the currency, making the future of crypto uncertain.

Novogratz said he predicts that the New York Stock Exchange will be involved in cryptocurrency trading within six months.

Not everyone sees potential in cryptocurrencies. Famed investor Warren Buffett has been bearish on bitcoin. The Berkshire Hathaway(BRKA)CEO told CNBC before his company’s annual shareholder meeting on Saturday that bitcoin was “probably rat poison squared.”

The former hedge fund manager shrugged off Buffett’s criticism off.

“In a lot of ways, this is a Millennial-led revolution … what I’ve found is guys with gray hair [are] much more skeptical.”

“Markets Now,” featuring insightful interviews and commentary on the markets and financial news, streams live from the floor of the New York Stock Exchange every Wednesday at 12:45 p.m. ET.

Last week, Scott Minerd, managing partner at the global investment and advisory firm Guggenheim Partners, advised that “this is the rally to sell, not to buy into.”

March 29, 2017 Admin Comments Off on Premarket: 6 things to know before the bell