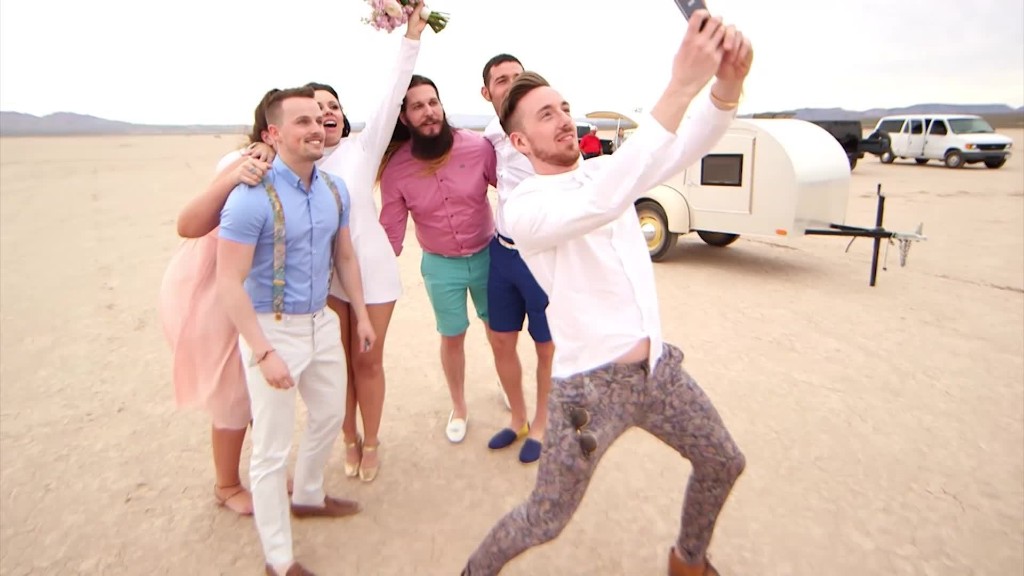 Honeymoons are usually a romantic escape for the newly-wedded couple … a time to get away and relax — just the two of them.

But some couples are skipping the one-on-one romance and making the honeymoon a group event.

“They want to bring everyone with them,” said Joan Newton, the founder of travel agency JB Cruise & Tours in New York. Since August, she’s planned four group honeymoons and described it as planning a destination wedding, but the wedding has already taken place. “It’s like, the more, the merrier.”

When Daniela Kelley McInerney and her husband decided to get married in Brazil last year, they planned to take a two-week honeymoon following their big day. One week included their friends and then it was just the two of them.

Related: Couples are spending a record amount to get married

She called that first week her “groupiemoon” where 14 of her friends joined them as they celebrated their new life. They rented a catamaran, spent time on Ilha Grande island and explored Rio de Janeiro. They enjoyed hikes, the beach, dinner and dancing together.

Knowing that some of their guests were going to travel with them relieved some of the pressure to socialize with everyone at the wedding. “We were able to spend time with people and not rush through conversation,” said Kelley McInerney.

Heading into the wedding, seven friends were scheduled to spend the week with the couple. But as more people learned of the adventures during the wedding weekend, seven more decided to extend their stay.

“All these people didn’t know each other,” she said. “The coolest part is you have your friend from kindergarten dance with your college roommate.”

Travel experts said that each person tends to pay for themselves on group honeymoons, but the newlyweds often take their friends’ budgets into account.

Mitch Toren, chief vacation engineer at TripGuy Travel, said his travel company has been booking about one or two group honeymoons each month over the past five years. He says there are two types of group honeymooners: those going on experiential trips and those looking for more of a party getaway.

The experience excursions include outings like a safari or sailing trip. “Things that are considered more exotic travel, they want to do with friends and family as a group versus just two of them,” Toren said.

The party honeymoons are more social and active. “They aren’t looking for the romantic rose pedals on the bed and the candlelight dinners on the beach,” he said. “For group honeymoons, it seems less about the romance and more about the fun.”

Amy Kautz and her husband turned their mini-moon into a joint birthday celebration when they invited another couple to join them in Mexico.

“We did pretty much everything together,” Kautz said.

Having another couple with them helped them relax. “We are really adventurous get-up-and-go people. We aren’t good at relaxing and sitting by the pool,” said Kautz. “Having other people to interact with made relaxing easier for us. We get bored easily and they kept us entertained.”

The couple eventually took a longer honeymoon for just the two of them later.

And it’s not just honeymoons that are getting more crowded. Toren has seen an uptick in group birthday trips and vacations.

“Before it was a family planning a spring break vacation. Now you have eight families going together,” he said.

January 16, 2018 Admin Comments Off on The super-easy retirement investing plan

How Obamacare affects everyone

March 27, 2017 Admin Comments Off on How Obamacare affects everyone