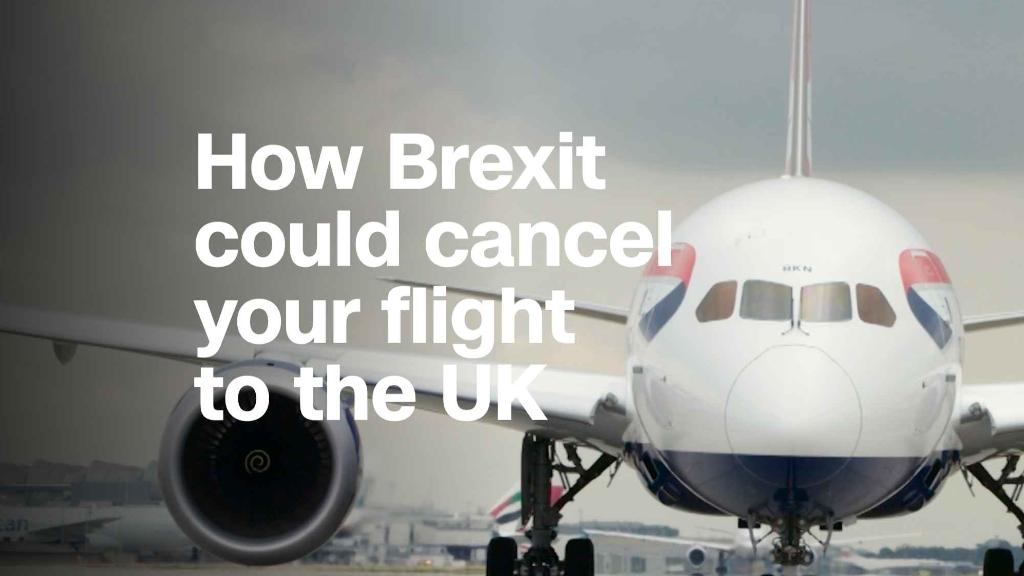 How Brexit could end flights in and out of the UK

The British government would like to leave the European Union. It just can’t figure out how to make that happen.

With just over 10 months to go until Brexit day (March 29, 2019), the government is paralyzed by indecision over the future trading relationship it wants with the European Union.

The policy choices will have profound implications for the economy and companies doing business in the United Kingdom.

Prime Minister Theresa May has been unable to unite her cabinet over how to handle the flow of goods after Brexit, or what to do about the Irish border — the only land frontier between the United Kingdom and the European Union.

Negotiators continue to shuttle between Brussels and London, but the same issues that were identified as stumbling blocks a year ago remain unresolved. And parliament has hit the government with a series of defeats on key pieces of legislation related to Brexit.

Experts say the chance that Brexit won’t happen is very slim, but the lack of progress and ever tighter deadlines are worrying investors and business executives. They fear a “no-deal” exit that would wreak havoc on the United Kingdom’s relationship with its biggest export market.

“We are in a period in paralysis,” said John Springford, deputy director of the Centre for European Reform. “The reason for that is all of the various bits of Brexit that are hardest to deal with are coming together at once.”

Businesses are most worried about disagreements over trade. Should the United Kingdom remain in a customs union that allows goods to flow freely across the European Union? Should it leave? Or opt for somewhere in between?

How best to approach this riddle has been the subject of a major political brawl. UK media report that May has divided her warring cabinet into two teams, and told them to hash it out.

One team will explore the feasibility of a “highly streamlined” customs arrangement that would use new technology — much of it expensive and untested — to “deliver as frictionless a customs border as possible.”

The second will look at a “customs partnership” under which Britain would collect EU import duties on goods from outside Europe. That would reduce the need for checks at the UK-EU border.

Even if May can settle on a preferred option, parliament or the European Union could still reject it.

“It’s mostly a delay tactic,” Springford said of May’s strategy for settling the issue. “These are essentially political choices, and no amount of study is going to convert anyone.”

Related: Brexit dream of ‘frictionless’ trade with EU is dying

Top officials are well aware of the risks to the economy if the gridlock continues.

“I was talking this week to the global president of Toyota Motors,” Business Secretary Greg Clark told the BBC this week. “They are making a big decision as to where the next motor plant should be in Europe.”

“We’ve got a very successful one … in North Wales, but there are choices as to whether that should be located on the Continent.” Toyota (TM) declined to comment on his remarks.

Business groups are clamoring for clarity. The pound, which plunged after Britain voted to leave the European Union but later recovered, has dropped 5% in recent weeks. The UK economy has stalled, partly because of uncertainty over the outcome of the Brexit process.

The issue of the Irish border also remains intractable.

The 310-mile border between Northern Ireland and Ireland is currently invisible, the legacy of the peace process that sought to end decades of sectarian violence. Traffic and goods flow freely, and there are no physical barriers.

Britain and the European Union both want to avoid the return of a “hard border.” But they haven’t been able to agree on how that might be accomplished.

The European Union has made clear that without an agreement on Ireland, there will be no Brexit deal.

Springford said that May is in an “impossible situation.” She cannot bend to the European Union on the Irish border issue without upsetting key political allies in Northern Ireland. Concessions on the customs union, on the other hand, would upset hardliners in her own party.

With two years having ticked away since the Brexit vote, the countdown clock is getting ever louder.

Russia is buying up US debt

June 22, 2017 Admin Comments Off on Gas prices are falling fast