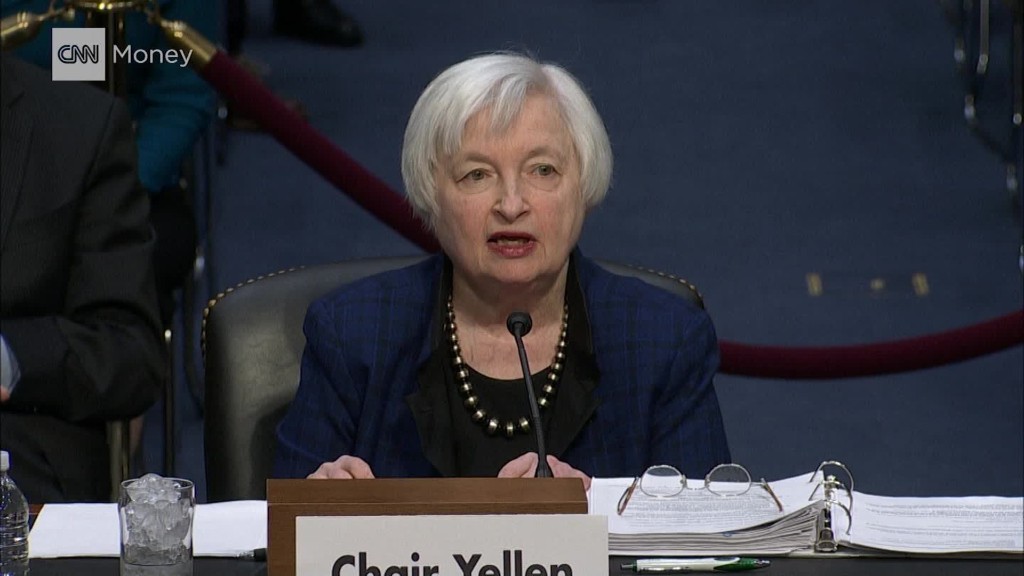 Yellen: Will serve out term, rate hike could be ‘relatively soon’

Get ready for higher interest rates.

Federal Reserve chair Janet Yellen signaled that the next rate hike could come as early as March in her testimony before the U.S. Senate Banking Committee on Tuesday.

“Waiting too long to remove accommodation would be unwise,” Yellen told the Senate.

Yellen stressed that the U.S. economy is doing pretty well and has “continued to make progress.” She called the U.S. job market strong and said prices are moving up at a faster pace.

“At our upcoming meetings, the committee will evaluate whether employment and inflation are continuing to evolve in line with these expectations, in which case a further adjustment of the federal funds rate would likely be appropriate,” Yellen said.

The next Fed meeting is March 14-15. Yellen’s words were widely interpreted as a strong hint the Fed might raise in March.

The U.S. 10-year bond yield rose immediately after Yellen’s statement from 2.44% to 2.5%. That will likely cause mortgage rates to jump soon as well.

“March is on the table,” says Peter Boockvar, chief market analyst at The Lindsey Group, although he noted that she is “NOT committing herself” to a March hike.

The Fed currently predicts three rate hikes in 2017. That said, the Fed began 2016 predicting four rate hikes and ended up doing only one.

Wall Street is currently betting only about a 20% chance of a March rate hike. Boockvar thinks Yellen wants to get that probability to at least 50%.

Uncertainty about President Trump is the key reason Wall Street doesn’t believe the Fed will hike rates in March. Yellen admitted she’s not sure what Trump and the Republican-led Congress will do so the Fed is in wait and see mode.

“Some of the policies being discussed may raise deficits,” she told the senators. “It’s not a simple matter to evaluate.”

She went on to say the Fed didn’t have “enough clarity” yet on what policies will actually be enacted.

U.S. stocks were little changed Tuesday after Yellen’s remarks. The Dow was slightly lower, but that follows many days of rallies. The Dow closed at an all-time high on Monday.

“We still think the Fed is unlikely to resume tightening before June,” wrote Capital Economics, a forecasting firm.