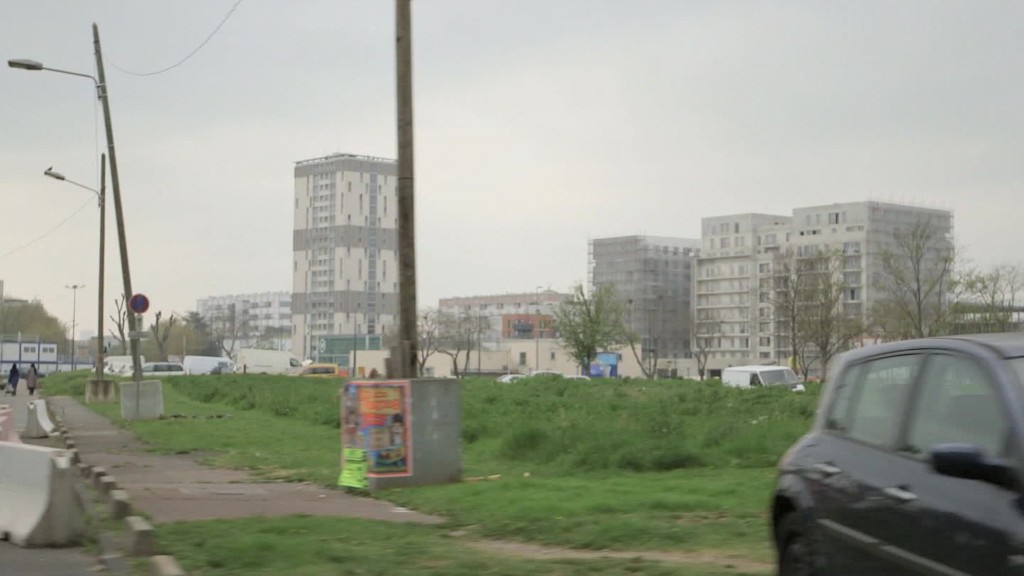 Forgotten in France: The banlieues outside Paris

Far-right firebrand Marine Le Pen and centrist candidate Emmanuel Macron, set to face off in a May 7 French election with major implications for the future of Europe, have very different views on the economy.

Macron, a former banker who served as economy minister, is socially liberal. He has argued that France’s economy can become more competitive if it embraces globalization and doubles down on free trade. Macron is a keen supporter of the euro and the EU.

Le Pen, meanwhile, represents a radical departure from the status quo in France. She advocates a strident brand of economic nationalism that would mean new trade barriers and the country’s exit from the eurozone.

Le Pen has proposed dropping the euro and switching to a “nouveau franc” of a lower value to help make French exports more competitive. Existing national debt would be converted to the new currency — a move likely to be considered a default.

She also wants to hold a referendum on France’s membership in the EU.

Related: They want to kill the euro

Le Pen is staunchly anti-globalization and has pledged to pursue policies she describes as “intelligent protectionism.”

That means no new free trade agreements and giving French companies priority on public contracts. It also means a new tax on companies that hire foreign workers, and additional taxes on imports.

Le Pen wants to cut the income tax rate for the poorest. She would lower the retirement age and keep the 35-hour working week.

She has opposed the privatization of big French state companies including postal service company La Poste.

Macron has promised to cut corporate tax rates gradually to 25% from the current 33%. He also wants to slash local housing taxes for the majority of French people.

He has pledged to cut public spending by €60 billion ($ 64 billion) a year, partly by making the government more efficient. He said he would cut up to 120,000 government employees by not filling positions as workers retire.

Macron is a free trade supporter and he campaigned in favor of CETA, the EU’s new free trade agreement with Canada.

Related: Who is Emmanuel Macron?

He said he would consider changes to how France’s 35-hour work week statute is applied.

He wants to spend €50 billion over five years on training, energy and the environment, transportation, health and agriculture.

March 15, 2017 Admin Comments Off on Trump and Merkel ready for tough talk on trade and defense spending

Why Britain needs the immigrants it doesn't want

October 18, 2017 Admin Comments Off on Why Britain needs the immigrants it doesn't want