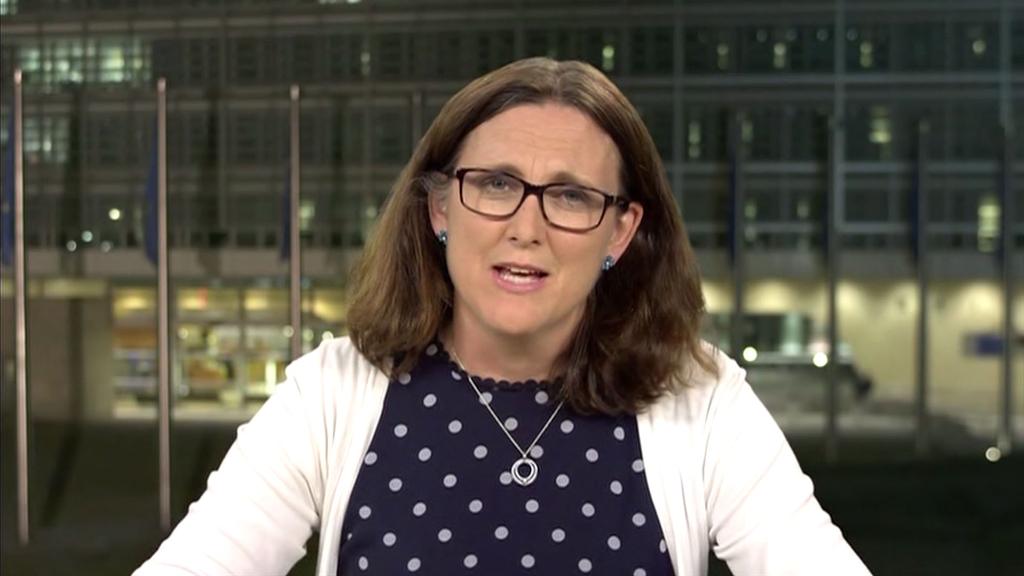 EU trade chief: We’re not a security threat to the US

President Donald Trump followed up a fractious weekend summit with major US allies by repeatedly accusing them of unfair treatment over trade.

“Sorry, we cannot let our friends, or enemies, take advantage of us on Trade anymore,” Trump said on Twitter. “We must put the American worker first!”

His complaints about foreign tariffs and trade surpluses are by now familiar. A frequent target is Germany and its car exports. Here are the facts.

Trump says there are too many German cars

Trump told French President Emmanuel Macron during a recent meeting in Washington that there are too many German cars in the United States. He’s also raised the issue with German Chancellor Angela Merkel in the past, and threatened to tax German car imports at 35%.

German automakers sold 1.35 million vehicles in the United States in 2017, about 8% of total US car sales. Of those, only 494,000 were exported from Germany to the United States — 25% less than in 2013, according to the German carmakers association.

Trump would likely have to pull out of NAFTA, the trade deal between the United States, Mexico and Canada, to prevent automakers from building vehicles in Mexico and shipping them across the border.

Then there are those German car factories in the United States.

BMW (BMWYY), Volkswagen (VLKAF) and Mercedes, which is owned by Daimler (DDAIF), all have major manufacturing plants in the United States and employ nearly 50,000 American workers.

The largest BMW assembly plant in the world is located in Spartanburg, South Carolina. Last year, it posted a new production record of more than 400,000 vehicles — 70% of which were exported to other countries.

Volkswagen has a large factory in Chattanooga, Tennessee, that produced 112,000 vehicles last year. And Mercedes makes 300,000 cars and SUVs a year in Tuscaloosa County, Alabama.

It’s a booming business: The total number of cars produced by German automakers in the United States has increased by 180,000 since 2013 to 804,000, according to the German carmakers association. Half are exported to markets including Europe and Asia.

Vehicles shipped from Europe to the United States face a low 2.5% tariff. Meanwhile, cars built in America face a 10% tariff when they’re exported to the European Union.

Europe says it was willing to lower its tariffs on automobiles during recent negotiations with the United States over steel and aluminum tariffs. Europe says the Trump administration walked away.

German automakers would most likely scale back investment in the United States if their products were targeted with increased tariffs. And the European Union would almost certainly respond by increasing tariffs on US autos.

Economists say that the focus on tariffs is misplaced.

New trade barriers would mean major problems for the industry at large, which relies on parts supply chains that cross multiple national borders.

“To make a clear cut distinction between what is an American car and what is a German car is in my opinion nonsense,” Jacob Kirkegaard, a European trade expert with the Peterson Institute for International Economics, told CNNMoney last month.

Can China make it 4 quarters of identical growth in a row?

January 19, 2017 Admin Comments Off on Can China make it 4 quarters of identical growth in a row?

One of Iran's most iconic industries faces disaster

July 26, 2018 Admin Comments Off on One of Iran's most iconic industries faces disaster