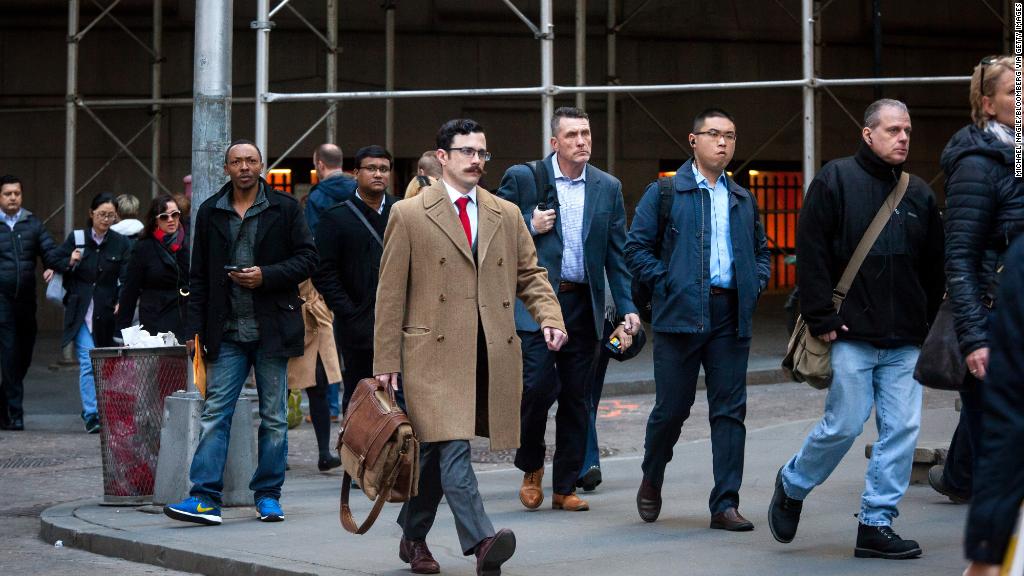 American workers are in high demand

The remarkable run began on March 9, 2009, in the ashes of the Great Recession and the scariest financial crisis since the 1930s.

The slow-but-steady economic recovery, coupled with unprecedented aid from the Federal Reserve, catapulted the Dow from around 6,500 to nearly 26,000 today. The S&P 500 has quadrupled from its 2009 low of 666. And market darlings like Netflix (NFLX) and Amazon (AMZN) have skyrocketed much further.

The bull market narrowly survived countless panic attacks from crisis-scarred investors along the way. There was the downgrade of America’s credit rating in 2011, the feared collapse of the euro, China’s alarming economic slowdown and the dramatic crash in oil prices.

Yet each scare failed to derail the steady rise of the economy and corporate profits that has underpinned Wall Street’s record-breaking run. There were close calls, but the S&P 500 never dropped 20%, the trigger for a new bear market.

Still, the lingering doubt about the market led some to call it the most hated bull market ever.

“No one believed in it all the way through,” said David Kelly, chief global strategist at JPMorgan Funds. “The pessimism that’s been a hallmark of the bull market has actually ensured its longevity.”

Boom, but no bubble

Market euphoria, like during the dotcom bubble, could have led to the bull market’s early demise. In fact, the longest bull run before this one began in October 1990 and ended with the bursting of the dotcom bubble in March 2000.

While this bull market is in the record books for durability, it’s hardly the most powerful. On an annualized basis, the S&P 500 has gained 16.5% since March 2009. That’s a bit below the average of 22% since 1932, according to S&P Dow Jones Indices.

But that run in the ’90s isn’t without controversy. Between July 1990 and October 1990, the S&P 500 plunged 19.92% over 87 days. Many, but not all, market analysts consider that to be a bear market because it rounded up to a 20% decline and caused the loss of more than half of the prior bull market’s gains.

But if the 1990 stumble isn’t classified as a bear market, then that bull market would have lasted 4,494 days, spanning late 1987 through early 2000. That would exceed the length of the current bull market.

There is another catch with Wednesday’s market milestone. The S&P 500 hasn’t set a record closing high since January 26, though it came very close on Tuesday. If the S&P 500 plunges 20% before making a new high, the record books will be revised to show that the bull market actually ended in January.

In any case, what really matters to investors is whether the market is showing signs of old age. But market veterans say the focus on time is misplaced.

Economists see little risk of a recession around the corner. Unemployment fell to 3.9% in July and the economy grew during the second quarter at the fastest pace since 2014. Even though the economy was already healthy, Washington boosted growth further by slashing corporate tax rates and ramping up government spending.

“While this bull market and economic recovery may very well be old,” LPL Financial strategists wrote to clients, “we see few signs that suggest an end is near.”

David Kotok, chairman and chief investment officer of Cumberland Advisors, agrees. He believes that strong corporate profits could lift the S&P 500 to 3,000 before the end of the decade.

But the economic expansion, already the second-longest in history, also faces threats from tariffs and inflation.

An escalation of the trade war between the United States and China could derail global growth while causing headaches for the Federal Reserve.

“If the trade war does not ratchet down,” Kotok said, “the Fed will have to fight more inflation with slower rates of growth. Therein lies a stewpot of risk.”

The Fed’s steady rate hikes and shrinking balance sheet have already helped set off turbulence in emerging markets such as Turkey and Argentina.

Another danger stems from the fading impact of help from Washington. The tax cuts and government spending may have created the boom-to-bust scenario that the economy avoided for the past decade.

“The biggest threat to the expansion is a letdown from the sugar high of fiscal stimulus,” said JPMorgan’s Kelly.

Unruly France is riskier for businesses than Haiti

August 3, 2016 Admin Comments Off on Unruly France is riskier for businesses than Haiti