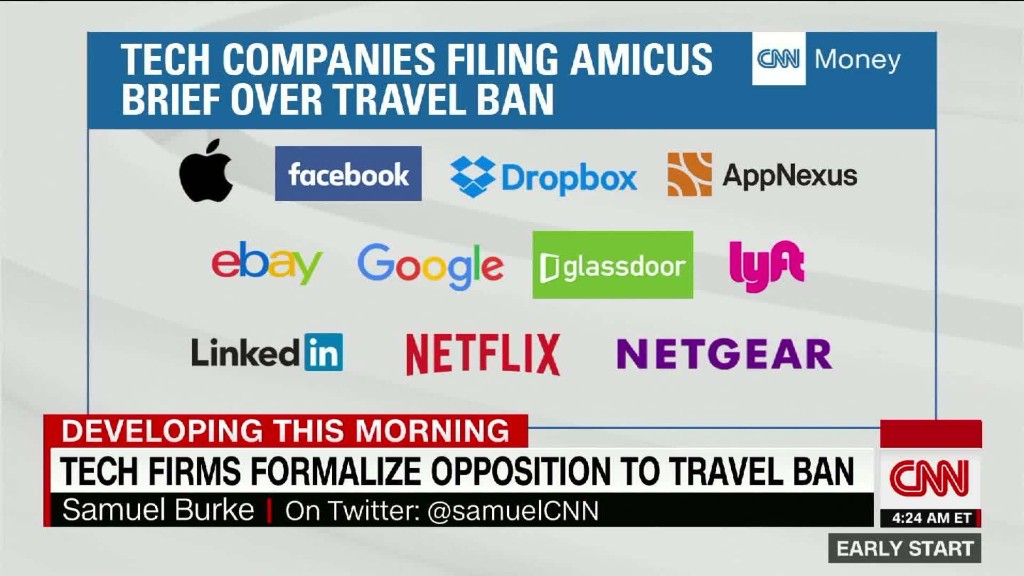 Silicon Valley may not like many of President Donald Trump’s policies, especially his proposed ban on immigration. But investors in tech stocks don’t seem too concerned.

Maybe it’s despite Trump, or because of Trump — after all, he is also promising to stimulate the economy with tax cuts, more government spending on infrastructure and fewer regulations — many big tech stocks are on fire this year.

The so-called FANG stocks of tech, Facebook, Amazon, Netflix and Google, have all soared in 2017.

And don’t forget Apple(AAPL, Tech30). It’s the best performer in the Dow this year, rising 20%. Fellow Dow component Cisco(CSCO, Tech30) is up more than 13% too.

All six stocks are part of the Nasdaq, which has gained 8% and has outperformed the Dow and S&P 500.

The solid performance of these companies has helped push the Nasdaq to within spitting distance of topping the 6,000 mark for the first time ever.

Related: These 10 stocks dominate the market

How long will it take for the Nasdaq to get to 6,000? That probably will depend on earnings. Most tech companies reported solid results for the fourth quarter and have issued good guidance for the first quarter and 2017.

While many investors are obsessed with news from Washington (and what’s popping up on Trump’s Twitter accounts) these tech giants should keep doing well regardless of the political landscape since they are leaders in their respective industries.

Just look at Netflix, for example. The stock rose Monday after UBS analyst Doug Mitchelson upgraded it to a buy.

He boosted his subscriber targets for the company — and said that even though Trump’s new FCC chair may eliminate Net neutrality rules that now help Netflix, he’s not overly concerned that regulatory changes will hurt Netflix or other techs too severely.

If Apple, Microsoft(MSFT, Tech30), Google, Oracle(ORCL, Tech30), Cisco and other large techs with a lot of cash overseas are allowed to bring the cash back, or repatriate it, at a lower tax rate, they may invest more in R&D, buy back stock, boost dividends or acquire more companies.

And at the end of the day, as long as investor sentiment about Trump remains strong — CNNMoney’s Fear & Greed Index continues to show signs of Greed in the market — then big tech stocks and other blue chips should continue to lead.

“This is still the most hated bull market ever but we’re not seeing any signs of that trend turning,” said Scott Colyer, CEO & chief investment officer of Advisors Asset Management.

China's version of Facebook may surpass the real one

November 16, 2017 Admin Comments Off on China's version of Facebook may surpass the real one

Goldman Sachs has a big gender pay gap in the UK

March 17, 2018 Admin Comments Off on Goldman Sachs has a big gender pay gap in the UK

Here's exactly what happened during the stock market's crazy week

February 9, 2018 Admin Comments Off on Here's exactly what happened during the stock market's crazy week