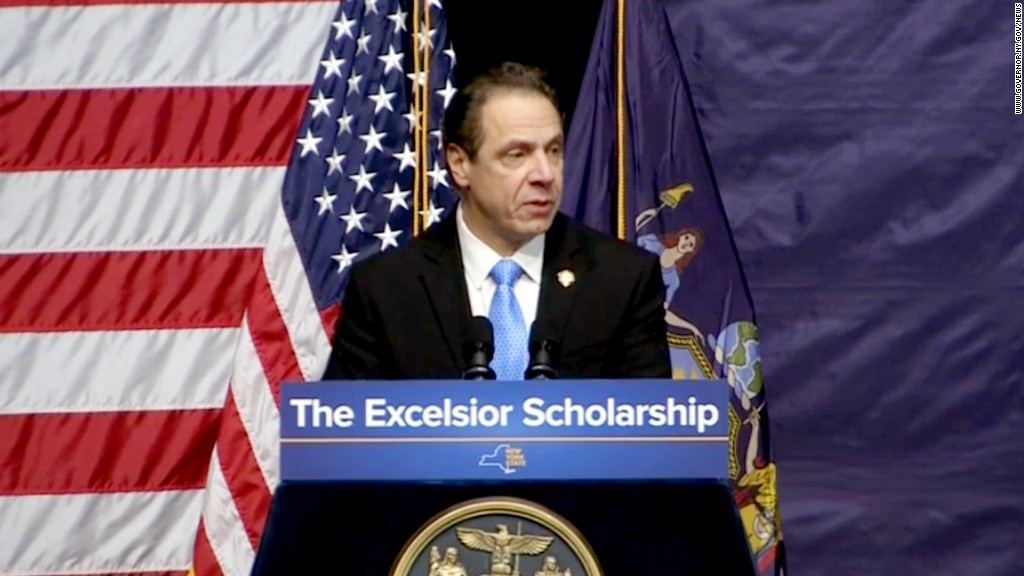 New York Governor Andrew Cuomo wants to make tuition free. But there’s a better way to make college affordable, according to some Republicans.

A group of Republican State Assembly members are criticizing the governor’s “tuition-free” college plan for excluding students at private colleges.

Instead of making tuition free at the State University of New York (SUNY) and City University (CUNY) schools, they want to expand the state’s existing grant program for low-income residents who are students at any accredited college in New York.

The Republican plan would effectively lower the cost of college for more New Yorkers than Cuomo’s plan would.But middle-income families who qualify would be paying less under the governor’s plan.

“This is not the time to consider segmented solutions that focus on only a fraction of the problem,” said Assembly Republican Minority Leader Brian Kolb.

The Tuition Assistance Program, known as TAP, currently awards students between $ 500 and $ 5,165 depending on their financial need. Families who earn more than $ 80,000 a year don’t qualify.

Kolb suggests raising the maximum award to $ 6,470 — the current cost of tuition at SUNY and CUNY schools — and giving students who already get a TAP award an extra $ 500.

The Republican plan would also raise the income threshold to $ 125,000. (It hasn’t increased since 2000.) That’s the same income cutoff for Cuomo’s plan, which makes tuition free only for families who earn less than that amount.

Related: San Francisco is taxing the rich to pay for community college

But all the uncertainly is making it difficult for some New Yorkers to plan for their future.

Christopher Crisostomo, a senior at KIPP College Prep High School in the Bronx, is currently trying to decide where to go to college. He’s applied to a mix of 24 public, private and out-of-state colleges.

If he chooses a SUNY or CUNY school, Cuomo’s plan would save him about $ 6,000. But it wouldn’t save him any money if he chooses to go to a private school like Syracuse University.

Under the Republican plan, he’d get some money from TAP no matter which New York school he chooses — but it won’t be as much as $ 6,000.

“Nothing is guaranteed. I want to keep my options open and see what kind of financial aid packages I get,” Crisostomo told CNNMoney this week.

To some, free tuition sounds like a gimmick. But it certainly gets people’s attention, and advocates say that’s one of its biggest benefits because it will encourage more people to go to college.

“For young people who have written college off because they assume they can’t afford it, they’ll hear about this and think, ‘Maybe college isn’t out of reach for me,'” said SUNY Chancellor Nancy Zimpher last month.

Cuomo estimates that his plan would cost the state $ 163 million in its first year, on top of the $ 1 billion it already spends on TAP. His office expects 200,000 students to attend college tuition-free once fully implemented.

The Republicans say their plan would cost roughly the same, but reduce the cost of college for at least 336,000 students. They also want to make graduate students eligible for TAP awards, and offer tax credits for residents paying off student loans.

Lawmakers have until April 1 to decide whether to include funding for the governor’s plan in this year’s state budget. Republicans don’t have the majority in the Assembly, but they do in the Senate where most have remained quiet on the issue. A spokesman for Senate Majority Speaker John Flanagan did not return calls or emails seeking comment for this story.

If the college affordability issue is not addressed in the budget process, lawmakers could make a change through legislation.

Republican Senator Kenneth LaValle, chair of the committee on higher education, introduced a bill last month that would also expand TAP, though in a slightly different way. It would raise the income threshold to $ 100,000, and raise the minimum TAP award by $ 1,000 (rather than raising the maximum).

The bill made it out of committee, but has not been scheduled for a vote. Senator LaValle was not available for an interview for this story, but he spoke briefly about the issue at last month’s committing meeting.

“This is a very important bill that the committee members should really look at. At some point in the budget process, we’re going to see something very similar to this,” he said.

When is it OK to tap your savings?