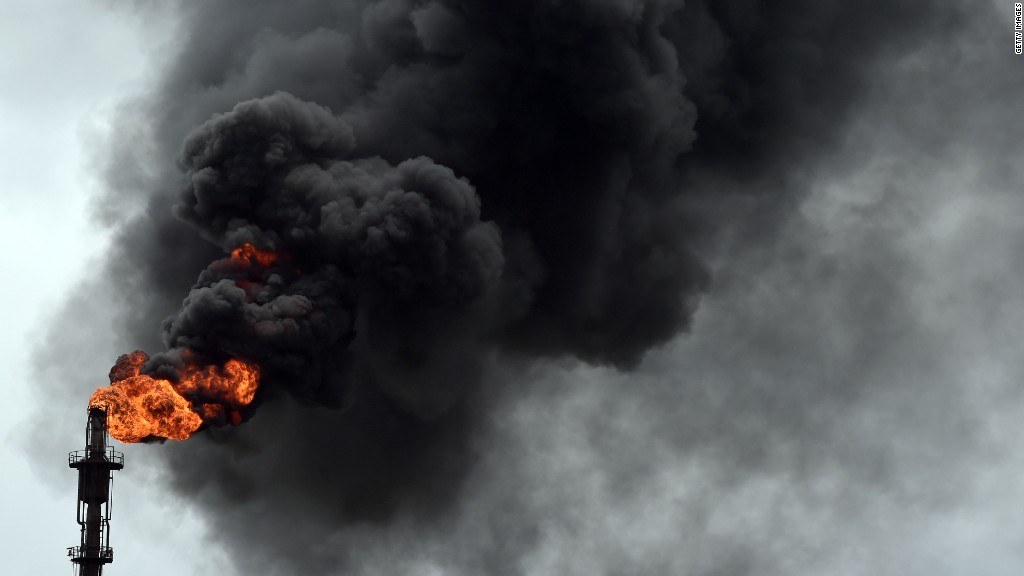 Renewed fears about the oil supply glut have sent crude prices plunging 15% from their peak in mid-April to $ 45.52 a barrel on Thursday.

It’s the weakest level for oil since November 29, the day before OPEC finalized a deal to slash production in a bid to end the epic oil glut.

The landmark OPEC agreement, the cartel’s first cut since 2008, initially sent oil bulls into a frenzy. Crude prices spiked and many predicted a speedy return to $ 60-plus prices as excess supply would finally be drained.

Flash forward five months and the epic supply glut continues to cast a shadow. A combination of resilient US shale output and surprisingly sluggish demand for gasoline from American drivers has led US stockpiles of oil to remain at historically-high levels.

Oil prices plunged another 5% on Thursday, dragging energy stocks like ExxonMobil(XOM) even further into the red this year.

“Today is a real scary day for the billions of dollars invested in higher oil prices,” said Tom Kloza, global head of energy analysis at Oil Price Information Service. “We continue waiting for this slow-motion, almost glacial rebalancing of crude.”

Related: This Texas oilfield is messing with OPEC

The explosion in US shale oil output over the past decade has reshaped the global energy landscape, catapulting America to the upper echelon of the list of global producers.

The glut in oil sent oil prices crashing in late 2015 and early 2016 and US shale production, especially in areas like the Bakken fields of North Dakota, took a hit.

But shale is on the comeback trail now, aided by technological advances and leaner business models that have allowed companies to pump profitably at far lower prices than before. Just look at how the tally of US oil rigs has more than doubled from last year.

“A lot of global players didn’t expect US production to be able to ramp up this quickly, at this price level,” said Jenna Delaney, senior oil analyst at Platts Analytics.

The Permian Basin, a shale hotbed in Texas and New Mexico, has been the particularly strong. Permian output has been so great that some forecasters now believe US output could soar to a new record by 2018.

Resurgent US oil production has overshadowed efforts by OPEC and non-OPEC members like Russia to support the oil market.

Silencing critics who predicted OPEC would cheat its own quotas, the cartel has shown considerable restraint this time around by overwhelmingly complying with its supply cut agreement.

But that has been offset by more pumping from Libya and Nigeria, two nations exempt from the OPEC deal. Production there has been stronger than expected.

Another driver for the weakness in the oil markets has been disappointing appetite from the US for gasoline.

Recent US gasoline demand, a closely-watched metric, is down by nearly one-quarter of a million barrels per day from last year.

Drivers could be reacting to the fact that while prices at the pump remain low, they are higher than last year. A gallon of gas goes for an average of $ 2.37 today, compared with below $ 2 in March 2016, according to AAA.

“Last year, it was so cheap, under $ 2 per gallon for a period, and that probably goosed demand a bit. Perhaps that was a one-off,” said Kloza.

He also pointed to how more fuel-efficient cars coming off the lot continue to guzzle less gas than the old ones they’re replacing. “That adds up,” Kloza said.

All of this adds to the pressure on OPEC, which is meeting on May 25 in Vienna. Support is building within OPEC to extend its oil production cuts by an additional three or six months, senior Gulf officials previously told CNNMoney.

“Now it seems as though that extension will have to move into 2018 as well,” said Vincent Piazza, a senior analyst at Bloomberg Intelligence.

December 14, 2016 Admin Comments Off on Premarket: 6 things to know before the bell

The real story at Tesla is the scramble for cash

July 24, 2018 Admin Comments Off on The real story at Tesla is the scramble for cash