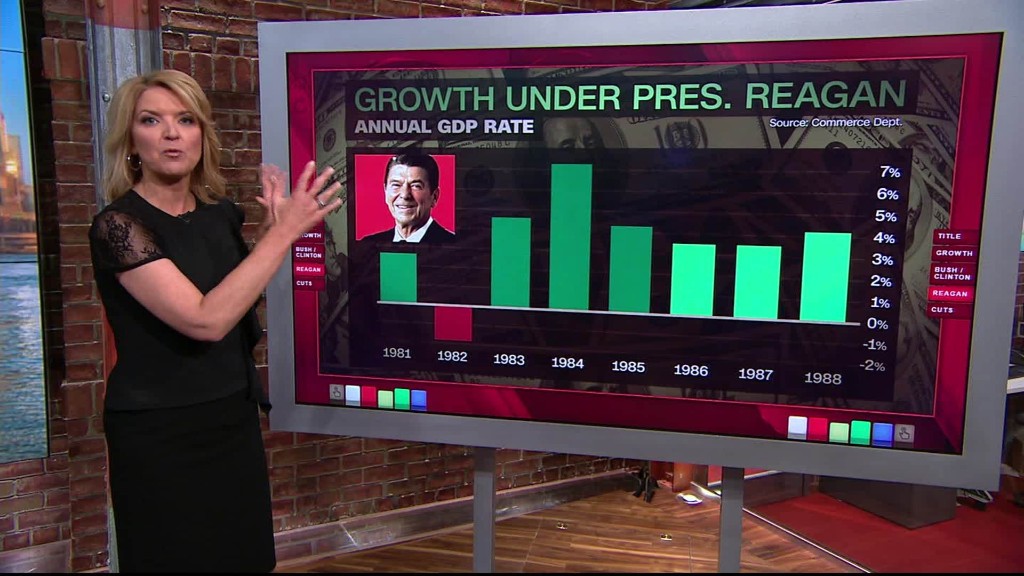 The White House just released its tax plan (a one-page outline of it). Trump wants to slash taxes for big businesses, small businesses and Americans across the country. It’s the “tax cuts for everyone” mentality.

This is about “helping low and middle income families who have been left behind by this economy,” Gary Cohn, Trump’s top economic adviser, said Wednesday.

But many economists are shouting as loudly as they can that this recipe — known as “supply side economics” or “trickle-down economics” — doesn’t work. When big corporations and the wealthy get tax cuts, they don’t usually turn around and give that extra cash to workers or customers.

Supply-side economics “is an idea that is profoundly simplistic and ultimately without merit,” says Bernard Baumohl, chief global economist at The Economic Outlook Group. “History and economic research have repeatedly discredited it.”

Let’s look at the historical record.

The Bush tax cuts: The last time federal taxes were cut was when George W. Bush was in the White House. The Bush team reduced taxes in 2001 and 2003 in an effort to revive the economy after the tragic events of 9/11. The rich got the biggest benefit. Their after-tax incomes jumped by a much larger percentage than middle-class incomes did.

The result: Job growth was fairly anemic. It barely rose through 2007, making Bush the weakest job creator of any recent president.

Economic growth was so-so. It averaged 2.6% after the cuts. That’s lower than the historic average of over 3% a year (which happens to be the rate the Trump team is aiming for).

Pretty much everyone agrees the Bush tax cuts didn’t yield a recovery. The non-partisan Brookings Institute concluded the impact was “negligible” on growth.

The only lasting effect was a whole lot more debt. Due to a combination of the tax cuts and a big increase in government spending for the wars in Iraq and Afghanistan, debt jumped from $ 5.8 trillion in 2001 to nearly $ 10 trillion when Bush left office.

Related: How Trump’s tax plan would help the wealthy (and Trump)

The Clinton tax increase: Liberals often point to the Clinton era because the economy was humming in the late 1990s by just about any metric.

Clinton actually increased taxes in 1993. The wealthy took the brunt of it.

The result: Nearly 17 million jobs were added to the economy after the tax hike. On top of that, economic growth surged, averaging about 4% a year. The U.S. government even ran a budget surplus for awhile.

Why such a big difference between the Clinton and Bush years? It’s tempting to say taxes, but tax policy is just one lever out of hundreds being pushed and pulled in the economy.

For example, the economy had to climb out of a recession under Bush. In contrast, Clinton was in office just as the Internet was starting to take off and totally changing how many businesses worked around the world, plus the dot-com boom was in full swing. Innovation and the business cycle play a big role too.

The Reagan tax reform: Trump says he wants to do more than just tax cuts, he wants to do full-blown tax reform. The idea is to eliminate various goodies in the tax code that help businesses and the wealthy lower their tax bills.

It’s far more difficult to do tax reform than tax cuts. Reform has only happened once in the past 50 years — in 1986 under President Ronald Reagan. Republicans are keen to repeat it.

Reagan’s team actually started the process by cutting taxes in 1981. But they didn’t stop there. They kept pushing for a larger overhaul. The end result is they slashed rates for the wealthy, but they also eliminated a lot of loopholes. They got rid of so many that the rich actually ended up paying a larger share of the total tax pie than they did before Reagan started.

The result: Growth soared. (It actually fell in 1982 as the economy slumped into a recession, but it jumped after that). Republicans consider this chart a sort of “holy grail.”

The economy addedabout 16 million jobs after the 1981 cuts, and Reagan was able to get closer to balancing the budget (although he still added to the debt).

Of course, there’s heavy debate about whether Reagan’s tax reform was what really drove the growth. Some argue the Federal Reserve’s dramatic policies in the 1980s to combat inflation played an even bigger role. The Fed jacked up interest rates in the early 1980s and then cut rates, which helped fuel more business and personal spending, especially on houses.

The bottom line: Tax cuts alone don’t cause the economy to flourish (and tax hikes don’t always lead to downturns). Trump and Congress would have to tackle real tax reform to have the best shot at boosting growth and jobs. And they would have to do it in a way that doesn’t add substantially to the debt.

Trump’s latest proposal would add $ 5.5 trillion to the debt over the next decade, according to the Committee for a Responsible Federal Budget.

If tax cuts are funded through borrowed money, it usually reduces Americans’ savings and pushes interest rates higher. That’s not good for growth.

–CNN’s Christine Romans and Michael Tarson contributed to this article.

October 6, 2017 Admin Comments Off on Quest: Are Theresa May's days in charge numbered?