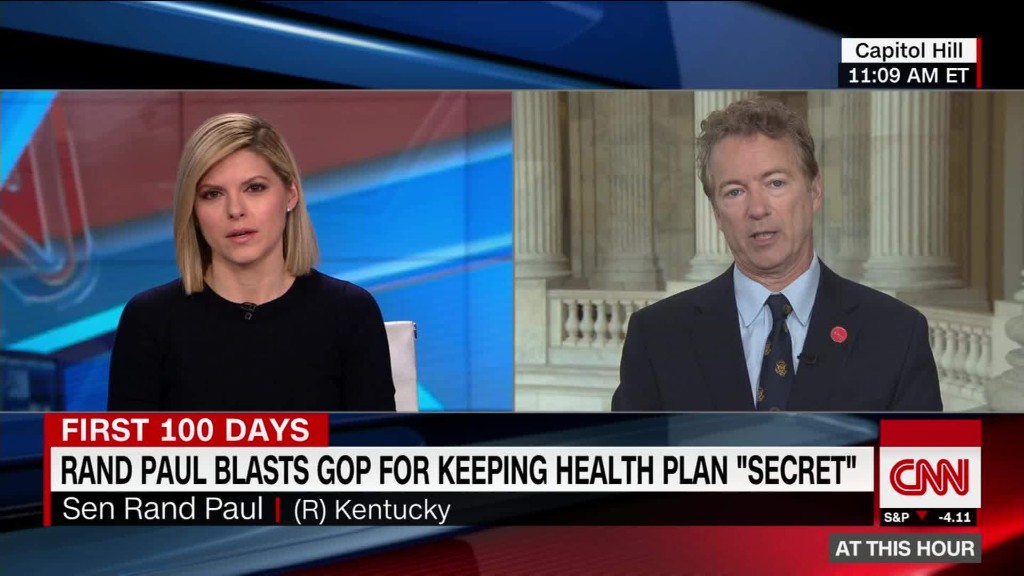 Republican lawmakers have long vowed that they can make health care more affordable and accessible. Americans will now see if Congress can keep that promise.

The House finally revealed its plan to repeal and replace major portions of the Affordable Care Act on Monday. While the bill will likely change a lot before it lands on President Trump’s desk, it’s already possible to see whom the winners and losers in the individual market and Medicaid could be.

Titled the American Health Care Act, the legislation calls for providing refundable tax credits based on a person’s age and income. It keeps the Obamacare protections for those with pre-existing conditions, but it allows insurers to levy a 30% surcharge for a year on the premiums of those who let their coverage lapse. It lifts the taxes that Obamacare had imposed on the wealthy, insurers and prescription drug manufacturers. And it loosens or removes several of the health reform law’s strict insurance reforms so that carriers can offer a wider — and some say skimpier — suite of policies.

The bill also eliminates the enhanced federal match for Medicaid expansion starting in 2020 and revampsthe funding for the entire Medicaid program.

The most glaring weakness of the GOP bill is that it will likely leave millions uninsured, experts said. Republican lawmakers have repeatedly skirted that question, but reviews of preliminary drafts by the Congressional Budget Office confirmed the problem, sources said.

“With Medicaid reductions and smaller tax credits, this bill would clearly result in fewer people insured than under the ACA,” said Larry Levitt, senior vice president at the Kaiser Family Foundation. “The House GOP proposal seeks to reduce what the federal government spends on health care, and that inevitably means more people uninsured.”

Experts remain divided over the impact on the individual market. Some say insurers would flee or jack up their rates if millions of people drop out. Others contend that the Republican bill would stabilize the market and premiums because the reforms would give insurers more flexibility and entice more younger enrollees to sign up for coverage.

“If we let the ACA continue on its current trajectory, people really will lose coverage,” said Doug Badger, senior fellow at the Galen Institute, a free-market, health-care think tank.

Here’s who would likely lose under the Republican plan:

Lower-income folks could be left uninsured. Obamacare contains many provisions to help poor and lower-income Americans. It expanded Medicaid to cover adults who earn up to $ 16,400 a year — some 11 million people in 31 states and the District of Columbia are now insured as a result.

Also, those with incomes just under $ 30,000 receive generous subsidies to lower their premiums, deductibles and out-of-pocket costs on the individual market.

The American Health Care Act would reverse much of this. It would end the enhanced federal Medicaid funding for new enrollees starting in 2020. Those already in the program could stay as long as they remain continuously insured. But since up to half have a break in coverage each year, it’s likely participation would fall off quickly, said Jocelyn Guyer, managing director at Manatt Health, a consulting firm.

But the Republican bill would go beyond just eliminating Medicaid expansion. It would overhaul the whole program, which covers more than 70 million people, by sending states a fixed amount of money per enrollee, known as a per-capita cap. This would limit federal responsibility, shifting that burden to the states. However, since states don’t have the money to make up the difference, they would likely either reduce eligibility, curtail benefits or cut provider payments.

All this could hurt not only poor adults, but also low-income children, women, senior citizens and the disabled.

The legislation also would eliminate the subsidies that reduce deductibles and co-pays for moderate-income policyholders on the individual market. And the tax credits it would provide would not go as far Obamacare’s subsidies.

Older Americans could have to pay more. Enrollees in their 50s and early 60s benefited from Obamacare because insurers could only charge them three times more than younger policy holders. The bill would widen that band to five-to-one.

Also, the GOP bill doesn’t provide them as generous tax credits as Obamacare. A 60-year-old making $ 40,000 would get only $ 4,000 from the Republican plan, instead of an average subsidy of $ 6,750 from the Affordable Care Act, according the Kaiser study.

The sick could get coverage, but it could be more limited. The GOP plan actually provides stronger protections for those with pre-existing conditions than some prior Republican proposals. Like Obamacare, it requires insurers cover these folks and prevents carriers from charging them more because of their health.

But the Republican plan would lift the requirements that insurers cover a certain share of the costs and provide a specific array of benefits — such as maternity and prescription drug coverage. This change would allow carriers to offer a wider selection of policies, including more with limited benefits. That could make it more costly — or more difficult — to find more robust plans that the sick often need.

Here’s who would likely win:

Younger Americans could get cheaper plans. Obamacare was designed so that younger policyholders would help subsidize older ones. That would change under the Republican bill because it would allow insurers to charge older folks more.

This means that younger Americans would likely see their annual premiums go down. Enrollees age 20 to 29 would save about $ 700 a year to $ 4,000, on average, according to the Milliman study for the AARP.

Those under age 30 would also get a refundable tax credit of up to $ 2,000 to offset the cost of their premiums, as long as their income doesn’t exceed $ 215,000 for an individual. It’s more likely that younger folks who are earlier in their careers would fall under this cap.

The GOP tax credits would also likely be more generous than Obamacare’s subsidies for these folks. For example, a 27-year-old making $ 40,000 a year would receive $ 2,000 under the GOP plan, but only gets a $ 103 subsidy from Obamacare, on average, a Kaiser analysis found.

The healthy could buy less expensive policies. Some Americansare not happy that Obamacare has forced them to buy more comprehensive policies with higher premiums that provided what they consider to be needless benefits. The American Health Care Act would once again let insurers sell skimpy plans.

But these bare-bones offerings — which come with lower premiums — are all some healthier Americans want. Restoring these options would draw in some folks who’ve opted to remain uninsured and pay a penalty, rather than sign up for too-generous policies, Republican lawmakers argue.

Higher-income Americans could pay fewer taxes, get more tax benefits. The legislation would eliminate two taxes that Obamacare levied on the wealthy to help pay for the law. Nearly everyone in the Top 1%, who earn more than $ 774,000 a year, would enjoy a hefty tax cut, averaging $ 33,000, according to the non-partisan Tax Policy Center. Those in the Top 0.1% would get an average tax cut of about $ 197,000.

And the bill would allow folks to contribute more to Health Savings Accounts, which are primarily used by better-off Americans who can afford to sock money away for health care expenses.

Also, the Republicans would enable people higher on the income scale to claim the tax credit to help pay their premiums. Under Obamacare, an enrollee who makes more than $ 47,500 is no longer eligible for a subsidy. The GOP plan would let a policyholder making up to $ 75,000 claim the full tax credit. The benefit would phase out slowly until the enrollee hits $ 215,000 in income.

Insurance companies could get a big tax break. Obamacare allowed insurance companies to deduct only $ 500,000 of their executives’ pay as a business expense. The GOP bill would repeal that limitation, starting in 2018.

Top insurers pay their leaders millions in compensation every year so this provision could mean a nice tax savings for the companies.

Getting deported was the best thing that ever happened to me

June 25, 2017 Admin Comments Off on Getting deported was the best thing that ever happened to me

China is killing his business. Tariffs could make or break it

June 15, 2018 Admin Comments Off on China is killing his business. Tariffs could make or break it

November 10, 2016 Admin Comments Off on 4 states just voted to hike their minimum wage