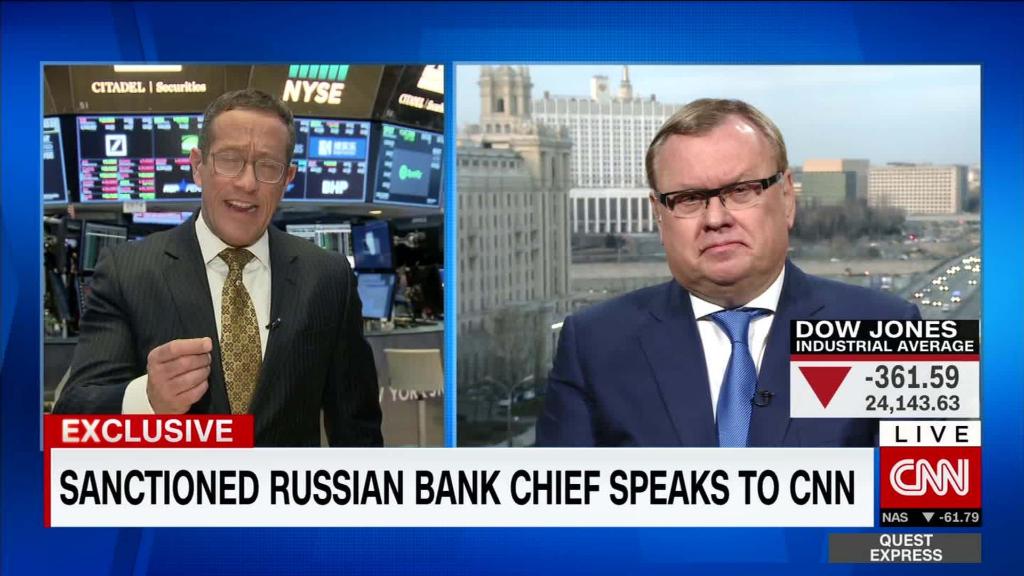 Exclusive: VTB Chairman speaks out after being hit by U.S. sanctions

A Russian oligarch is loosening his control of two companies that have been slammed by US sanctions.

Oleg Deripaska has agreed to reduce his stake in EN+ to below 50%, the company said in a regulatory filing in London on Friday. He will also resign from the sanctioned firm’s board.

EN+ is the largest shareholder in aluminum producer Rusal. At the end of December, Deripaska owned more than 76% of EN+, according to Rusal’s annual report.

Deripaska was hit earlier this month with tough sanctions on Russian oligarchs that target him and his businesses.

EN+ and Rusal are part of a tangled web of corporate entities under his control. EN+, which went public last year in London, has a 48.1% stake in Rusal.

Related: US sanctions are killing this oligarch’s business

The US Treasury Department said Monday it would consider easing the sanctions on Rusal if Deripaska divests.

Treasury Secretary Steven Mnuchin also said the United States would extend the deadline for companies that do business with Rusal to undo those ties. Companies have until October 23 to untangle themselves.

On Friday, a Treasury spokesperson said that the department “does not have additional guidance to offer at this time,” but that “a reduction in the percentage of ownership by a sanctioned individual is not necessarily in and of itself a basis” for easing sanctions.

Under the sanctions, Americans are prohibited from doing business with the companies, and people of other nationalities could face sanctions themselves if they facilitate transactions for the firms.

Rusal produces 7% of the world’s aluminum, according to the US Treasury. International buyers, business partners and commodity exchanges have been scrambling to sever ties with the company.

The imposition of sanctions caused aluminum prices to spike dramatically, andsent Rusal’s shares crashing 57% in Hong Kong. EN+ has lost 50% of its value.

Deripaska, a physicist by training, has earned a reputation as a survivor.

He emerged from the chaotic scramble for assets following the collapse of the Soviet Union with a massive fortune, which Forbes estimated at $ 28 billion in 2008. Soon after, a sharp decline in commodities prices during the financial crisis caused his net worth to plummet.

He recovered his footing, and billions of his fortune, in the years that followed.

Deripaska has a longstanding relationship with Russian President Vladimir Putin. He is also a former business associate of Trump campaign chairman Paul Manafort, who has been indicted as part of an investigation by US special counsel Robert Mueller. Manafort has pleaded not guilty to all charges against him.

In announcing the new sanctions, the US Treasury said that Deripaska had “said that he does not separate himself from the Russian state.”

Deripaska has described the US sanctions as “groundless, ridiculous and absurd.”

June 2, 2017 Admin Comments Off on Dow races to new record