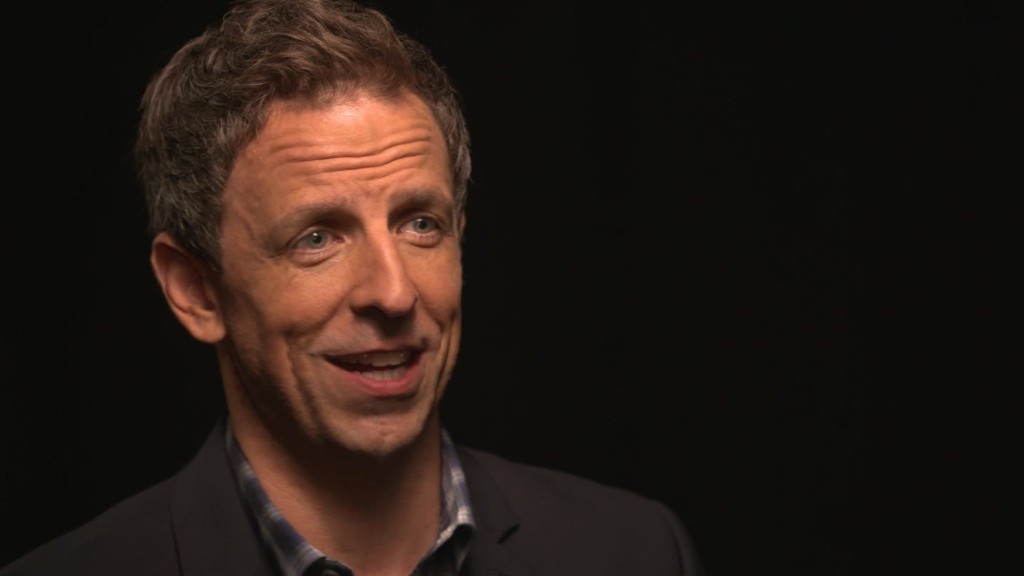 Which Game of Thrones character would Seth Meyers be?

Seth Meyers has made a name for himself as one of the most outspoken political satirists in late night, so he probably felt right at home in D.C. this week.

Meyers, the host of NBC’s “Late Night,” just wrapped a week long stint of shows from the nation’s capitol following months of delving deep into the crazy 2016 election. Meyers has done this best via his signature bit, “Closer Look,” which both examines and makes fun of the race (including scorching Donald Trump seemingly on a nightly basis).

CNN spoke with Meyers a few weeks ago about his place in late night, his show after the election, and “Game of Thrones.” The conversation has been edited for length and clarity.

You’re at 12:30 a.m., which sets up a good rivalry between you and James Corden and “The Late Late Show,” who is kind of this viral rocket ship with “Carpool Karaoke.” Is there any pressure to be more viral in what you do?

Well, first of all, I don’t consider it a rivalry. I think it’s really nice and it’s lucky for both of us that we do such different shows. I feel like if we had similar styles and similar skill sets, there probably would be a rivalry. I’m in a nice place. I talk about politics, whereas I feel like James is more of a natural entertainer. If I had James’ skills, I would feel so insanely jealous every time I saw “Carpool Karaoke.” But, because nothing would be more boring than watching me drive around with Mariah Carey, I mostly am happy that he’s the one who’s doing it. I don’t feel that much pressure. We try very hard to talk about politics every day. Those tend to have a, obviously, smaller viral footprint, but we do it every day. Hopefully, that’s how people are consuming our show as well as watching it at night.

You’ve actually moved to the desk from doing a stand up monologue. Why did you do that? Was it just because you have bad knees or a bad back?

My back feels better since the shift, but that wasn’t the reason.

So much of what we’re trying to do is to differentiate from “The Tonight Show” [with Jimmy Fallon]. Jimmy does it so well. We felt like it was a mistake to try to do anything that was similar. An hour after watching him do his standing monologue it seemed like we might be telling our audience, hey, here’s more of the same. As opposed to, here’s something a little different. I also feel more comfortable behind the desk.

It helps with this new iteration. I think one of the reasons we didn’t go straight to the desk was I was so desperate to show people this wasn’t just going to be an extension of “Weekend Update”… Now that I’m back behind the desk, that is where I feel like “Update” and all those years at “Update” are helping the show. It’s nice to fall back on that experience. I feel like I have good timing with telling jokes. I feel like I have a good sense of how to address the camera from behind the desk. Whereas I did feel a little bit lost on the monologue spot. I didn’t quite know where to look or what to do with my hands.

If you were a “Game of Thrones” character as a late night host, which character would you be?

I think probably Ned Stark. I’m going to tell it like it is, and probably to my great detriment.

You’re Ned Stark? That didn’t end too well for Ned.

Well, you know, come November, it might not end well for me.

If you weren’t a late night host, who would you watch in late night?

Well, I will admit that growing up, the late night show that I was obsessed with more than any talk show was “SNL.” That was my show. I will say, now, I don’t have much time to consume anyone. I’ll watch their best work online, which I feel like probably is what a lot of people do. Schedule-wise, [John] Oliver works out the best for me because Sunday night is the one time where I’m actually in a place where I would enjoy to watch a late night show.

Oliver is kind of doing what you do with “Closer Looks,” but over 20 minutes and once a week. How do you do the “Closer Looks” day to day?

We just have a really great staff… We’re very lucky to have the kind of people who can move really quickly and pull those off on a daily basis. There’s an intense amount of work. Not just to the writing of them, but we have a great support staff who’s pulling clips and doing the research and making sure we get the facts right. It’s a credit to our entire staff.

So where do you think “Late Night” is going? Where would you like it to go once the election calms down?

I think when the show settles after the election, no matter the outcome, it’ll be nice to not be in the intense day to day of a campaign that sort of churns up so much dust every day that it’s hard to see through to other stories. Obviously, there’s a lot going on outside of this election… It’ll be nice to talk, I think, about more of those things. Things that are a little bit more apolitical that everybody can sort of agree on.

Getting back to more uplifting things like “Game of Thrones.”

February 11, 2017 Admin Comments Off on Visa crackdown puts these rural doctors at risk

What to do with a wet iPhone 7