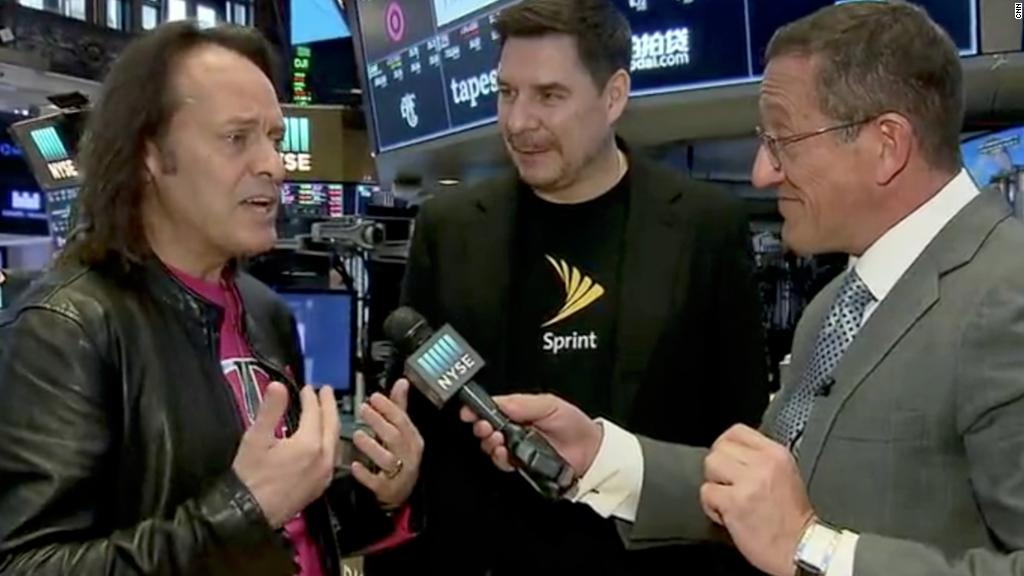 Sprint, T-Mobile CEOs on the odds of merger approval

T-Mobile and Sprint say they need to join forces if they want to compete for 5G.

But opponents of the proposed merger aren’t buying it.

The heads of both telecom companies made their case Wednesday before a Senate subcommittee. If the deal passes regulatory muster, it would leave just three major wireless carriers in the United States.

Sprint and T-Mobile’s biggest argument: Coming together is the only way they will be able to build ambitious 5G networks that can compete with not only CNN parent company AT&T (T) and Verizon (VZ), but the rest of the world.

“We will make sure America wins the global 5G race,” said T-Mobile (TMUS) CEO John Legere. “Nearly every business in America will be able to use 5G to revolutionize how they create and deliver goods and services. To make this happen, and to deliver on the full promise of 5G, we need to combine Sprint and T-Mobile now.”

Related: T-Mobile-Sprint deal will be a tough sell to antitrust regulators

A recent report from research firm Analysys Mason suggests it’s China and South Korea, not the United States, currently leading 5G development. And all four US wireless carriers have already been developing and testing the new technology, which will make our communications faster and more reliable.

It’s a pricey proposition. 5G needs to travel over super-high-frequency airwaves to be effective, which means companies will need to install thousands, or even millions of miniature cell towers everywhere to make it happen.

Barclays has estimated that rolling 5G out to the entire United States will cost $ 300 billion. During his testimony, Sprint (S) chairman Marcelo said that as a standalone company, Sprint would need to invest between $ 20 billion to $ 25 billion to deploy 5G — and that only covers highly populated areas.

The carrier, which is the country’s fourth largest, thinks that’s just too tall an order for it to accomplish on its own.

“We still struggle to attract new customers, and once we attract them, we struggle to keep them,” he added. “To be blunt, we lack the resources to challenge the two dominant players.”

Related: What is 5G?

Critics were skeptical of the benefits. Gene Kimmelman, the president and CEO of the consumer advocacy group Public Knowledge, said that competition from Sprint and T-Mobile is what has helped keep prices in the market low.

“At most, while the carriers may have succeeded in showing that a merger is one way to achieve 5G, they haven’t shown that it’s the only way, nor have they shown that the benefits of achieving 5G at the expense of competition is worth the tradeoff,” he wrote in prepared testimony for the hearing.

Kimmelman added that both companies also have not “convincingly” shown “how future upgrades to 5G are enough to justify a loss of competition in the meantime.”

Market slumps at a bad time for Trump

January 31, 2018 Admin Comments Off on Market slumps at a bad time for Trump