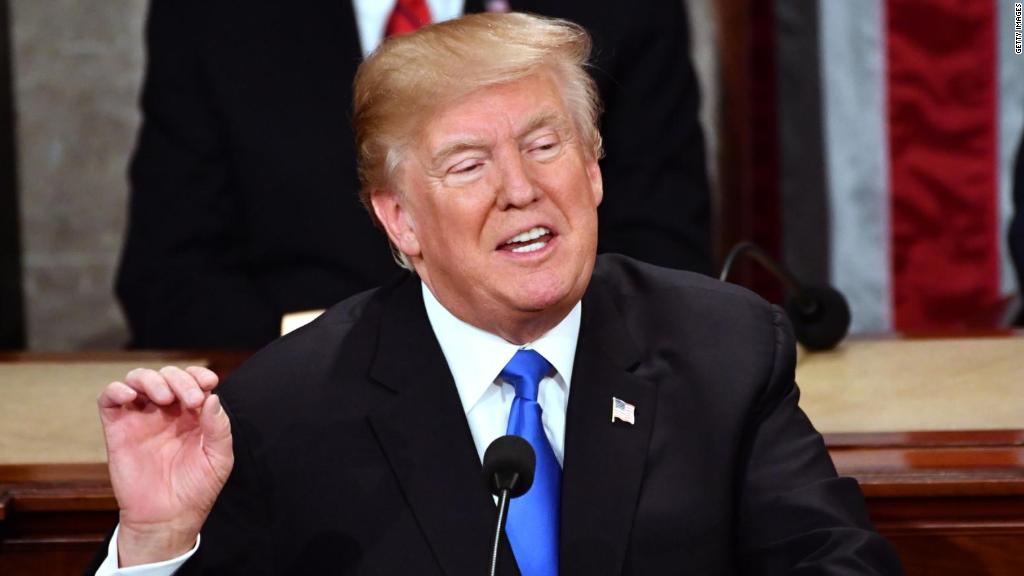 What Trump said on taxes during his SOTU speech

The deadline to raise the debt ceiling just moved closer … largely thanks to the new tax law.

That’s according to the Congressional Budget Office, whichon Wednesday moved up its estimate of when lawmakers must raise the U.S. legal borrowing limit to avert a default on the country’s debt.

Starting in February, as result of new withholding tables issued by the IRS, employers will likely withhold between $ 10 billion and $ 15 billion less in federal income taxes from workers every month than previously estimated, the CBO noted.

With less money projected to come in, the CBO now estimates that the special accounting measures Treasury has been using since December will be tapped out sometime in early March.

Previously the agency had estimated Treasury’s extraordinary measures would be exhausted in late March or early April.

Corporations are also expected to pay in an estimated $ 79 billion in new revenue this year because of a one-time tax on foreign earnings included in the new tax law. But the CBO doesn’t expect that money will be recorded by Treasury before it exhausts its special accounting measures.

When those measures are fully depleted — the so-called X date — the Treasury will only be able to pay the country’s bills with the cash it has on hand, plus the revenue coming in. That will not be nearly enough to pay everything the country owes in full and on time.

If it comes to that, Treasury Secretary Steven Mnuchin would face a host of chaotic, legally questionable and technically difficult decisions of who to pay on time and who to put off until lawmakers act.

Defaulting on any U.S. legal obligation is a dangerous prospect without real precedent. Markets likely would buck, and if the impasse isn’t resolved quickly, the economy would suffer.

It’s also difficult to predict just what Congress will do in terms of setting spending levels. Lawmakers have until February 8 to agree on how much spending to authorize for the rest of this fiscal year, or at least a short-term funding bill. If they fail to do that the federal government will shut down for the second time this year.

On Tuesday, Mnuchin said he expected the government would be able to pay its bills through February.

“I respectfully urge Congress to protect the full faith and credit of the United States by acting to increase the statutory debt limit as soon as possible,” he said in a letter to lawmakers.

This man is wiping out school lunch debt, one campaign at a time

May 31, 2017 Admin Comments Off on This man is wiping out school lunch debt, one campaign at a time

September 6, 2018 Admin Comments Off on Mark Carney willing to lead Bank of England through Brexit aftermath