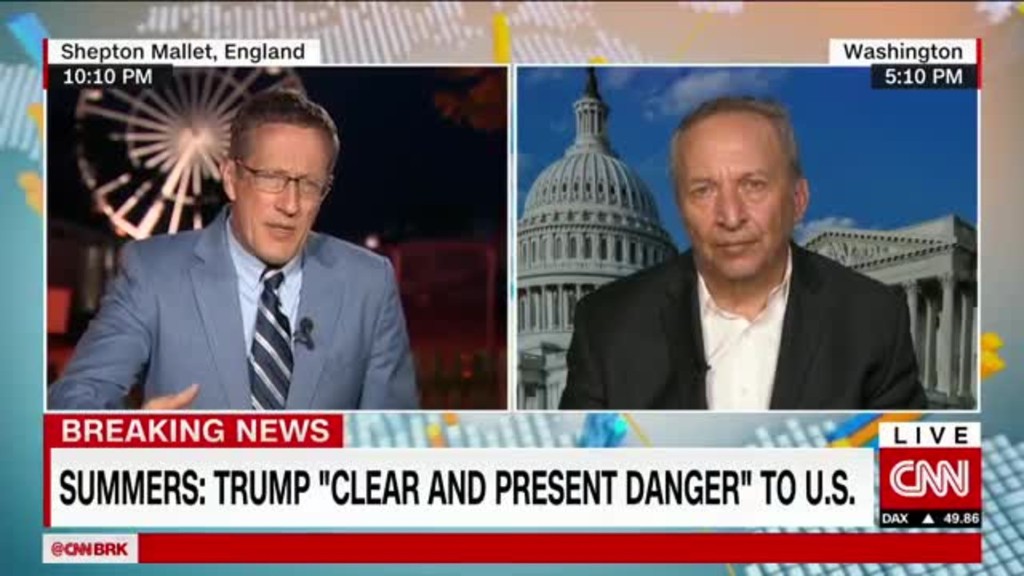 Summers: Trump is a ‘clear and present danger’ to the U.S.

Famed hedge-fund billionaire Ray Dalio fears the world today looks an awful lot like it did before World War II.

Like many Americans, Dalio seems preoccupied these days with the political situation in the U.S. He published an ominous LinkedIn post on Friday warning investors that for the first time since just before World War II there is “great economic, social and political polarity” that has given rise to populist leaders.

Dalio, who currently serves as Bridgewater’s chairman and co-chief investment officer, didn’t mention President Trump directly. But he cited a Bridgewater study that showed conflicts between “the common man and the elites” often take place during periods of time that sound like the current atmosphere.

The characteristics include “times of economic stress due to wealth and opportunity disparities,” when people fear their country’s core values are being threatened by foreigners and when government seems “so dysfunctional that radical change” is thought to be necessary.

Dalio said that history shows these conditions can give rise to a “strong-minded, confrontational fighter” who pursues nationalistic, protectionist and militaristic policies that lead to more domestic and international conflicts.

“In some cases it led to democracies becoming dictatorships, and wars,” Dalio warned ominously.

So is Dalio saying that’s going to happen now?

“I am not saying that we are on that path,” Dalio wrote, “but I am saying that it has to be watched out for because if it is in the works, it is a really big deal.”

For the most part, Wall Street isn’t reflecting these doom-and-gloom concerns. The closely-watched VIX(VIX) volatility index is sitting near its lowest levels since 1993. CNNMoney’s Fear & Greed Index is comfortably resting in “neutral” right now. And the Dow, S&P 500 and Nasdaq all hit record highs last week before retreating on Monday.

Many investors seem to believe the political situation will resolve itself. Even Dalio said that “so far, the political and legal institutions and systems have worked as intended.”

But Dalio argued that things have not been moving in the right direction. He said it’s become “increasingly apparent” in the U.S. and U.K. that there is a “trend toward conflict leading to greater dysfunctionality” in a vicious cycle.

Dalio pointed to very recent events to back up his case: the U.K.’s shocking vote that resulted in a hung Parliament and the James Comey hearing in Congress.

Comey used to work for Dalio, serving as Bridgewater’s general counsel between 2010 and 2013 before becoming the FBI director. Dalio has previously hailed Comey “as a man of integrity and a hero” who deserves “our thanks rather than scorn.”

For his part, Comey has said “there is no more demanding, probing, questioning environment in the world than Bridgewater.”

So what should investors look out for? Dalio said during the “early stages of a new populist administration” it’s important to monitor whether conflict moves to the point that it hurts the ability of government and the economy to function.

Dalio said the free media and government’s system of checks-and-balances can “incite emotional conflicts” and contribute to a “self-reinforcing downward spiral” that would have consequences for the economy and financial markets.

“Right now there is a whiff of it in the air,” Dalio said.

June 20, 2016 Admin Comments Off on Boo! These five stocks are scary