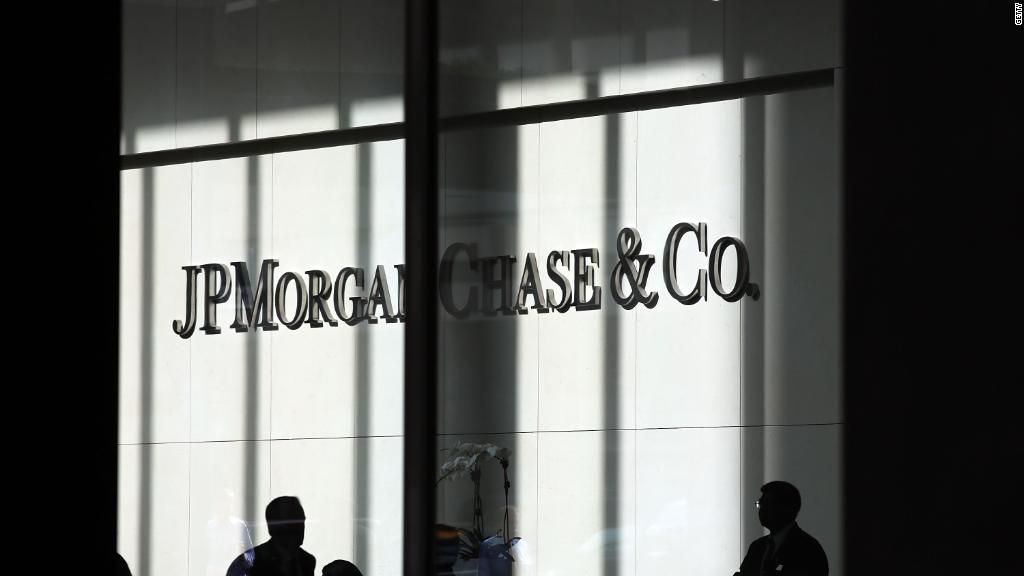 1. Big banks are ready for their close-up: Stocks have gyrated wildly in the past month, mainly because of headlines about possible trade wars and not because of any real data about how companies are doing. That’s about to change.

Investors will soon find out how big banks did in the first three months of the year. They’ll also get some hints about what these financial giants expect for the remainder of 2018.

Banks won’t be the only ones reporting earnings next week. Delta(DAL), Bed Bath & Beyond(BBBY) and Rite Aid(RAD) are also due out.

Results will probably be very strong. Wall Street is predicting that earnings for the S&P 500 will rise 17% from a year ago, and the banks should do even better.

Analysts are forecasting quarterly profit gains of about 20% from a year ago for BlackRock and Citigroup and a nearly 40% jump for JPMorgan Chase.

One reason: Ironically enough, the breakneck moves in the market are good for banks with big investment businesses. People tend to trade more in volatile markets, which boosts revenue for the financial firms. (Wells Fargo, which has less exposure to Wall Street, is expected to report just a 7% increase in profit.)

But investors will also be looking for clues from the big banks about whether the recent market turmoil will become more of a problem.

Dimon, who typically talks to reporters and financial analysts after JPMorgan Chase reports its earnings, has already issued a stern warning to political leaders in Washington.

He wrote in his annual shareholder letter last week that “retreating from the world is not the solution, nor is burning down the current system and starting anew.”

Dimon added that “people don’t think about the challenges in their everyday lives as being Democratic or Republican issues — and our political leaders need to stop thinking that way. We need a well-performing, competent government to thrive as a nation.”

It will be interesting to see whether Dimon has anything more to say about this — and whether the heads of the other big banks will weigh in with their thoughts on the possibility of a trade war and other big geopolitical issues.

2. Zuckerberg goes to Washington:Mark Zuckerberg will testify before a joint hearing of the Senate Judiciary and Commerce committees on Tuesday and then the House Energy and Commerce Committee on Wednesday.

Lawmakers have been insisting that Zuckerberg take their questions since the Cambridge Analytica scandal broke last month, raising concerns about how Facebook handles personal data. There’s a lot to talk about.

Initial reports said that the data analytics firm had improper access to the data of about 50 million users. Then Facebook said this week that up to 87 million users may have been affected. It also confirmed that it uses automated tools to scan Messenger chats for abuse. Australia also announced this week that it is launching a formal investigation into Facebook(FB).

Some think Zuckerberg’s appearance could encourage other tech CEOs, like the heads of Twitter(TWTR) and Google(GOOG), to finally testify.

3. More tariff drama ahead? The United States and China are inching closer to a trade war. President Trump threatened Thursday to impose tariffs on $ 100 billion more worth of goods, leading the Chinese government to warn that it is willing to take “new comprehensive measures” in response.

The back-and-forth has already been dizzying for Wall Street. The Dow swung 700 points on Thursday, and re-entered a correction on Friday. If escalations continue, the market could react strongly.

PPI and CPI are measures of inflation. Investors fear that if inflation takes off, the Federal Reserve could raise interest rates faster than it plans to. The indexes, and the details of the Fed meeting, could help investors figure out what to expect.

Disney is buying most of 21st Century Fox for $52.4 billion

Corporate America is raking in fat profits. Will it last?

August 14, 2018 Admin Comments Off on Corporate America is raking in fat profits. Will it last?

January 5, 2018 Admin Comments Off on Premarket: 5 things to know before the bell