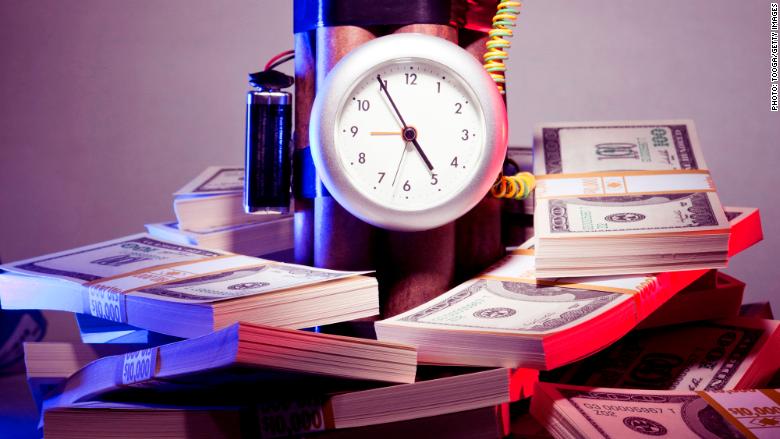 Smart savers work hard to keep the taxman at bay as long as possible. But there’s only so much you can do to put off having to pay some taxes. Eventually, the IRS wants its cut — and it’s best either to be prepared for the consequences or to take steps early on to avoid the problem in the first place.

Millions of Americans have tax time bombs lurking among their assets. Often, it’s a smart strategy to put these investments to good use, as long as you don’t forget about their potential downsides.

Here are three of the most common tax time bombs that you’ll find and what you can do to keep them from doing irreparable damage to your finances.

Perhaps the largest ticking time bomb from a tax perspective comes from the money that Americans have in IRAs, 401(k) plans, and other qualified retirement plans. 401(k)s have about $ 5.3 trillion in assets, according to the Investment Company Institute, and total retirement assets amount to $ 27.2 trillion. That second number includes annuities and traditional pensions, and both figures consist of both traditional and Roth-style IRAs and 401(k) plans. Nevertheless, it’s fair to assume that there’s somewhere between $ 10 trillion and $ 20 trillion in pre-tax assets held in retirement plans.

The problem with traditional IRAs, 401(k)s, and similar retirement accounts is that when you withdraw money from them, you have to pay income tax on what you pull out, and that reduces the size of your effective after-tax nest egg.

Even if you don’t want to withdraw your pre-tax retirement money, these accounts are almost universally subject to required minimum distribution rules that kick in at age 70 1/2. Once you reach that age, you have no choice: You must start withdrawing a portion of your account and paying taxes on it.

What’s more, the withdrawals you have to include in taxable income can subject other sources of income to tax. The most common example is Social Security, where benefits become taxable if your outside income lifts you over certain threshold amounts.

One solution is to make greater use of Roth IRAs and Roth 401(k) plan options. Roth accounts let you save after-tax money, with distributions being tax-free in retirement. Not all employers offer Roth 401(k)s, but conversions of existing traditional retirement assets to Roths are generally available.

Many people own savings bonds without even knowing it. As popular gifts from older generations to children, savings bonds differ from most bonds in that they accumulate interest on a tax-deferred basis. You don’t have to pay taxes on the income that they generate each year.

The price you’ll pay, though, is that you have to pay tax when you cash in your bonds. Because currently issued savings bonds stop earning interest after 30 years, you either have to cash them in and suffer the tax consequences or allow them to sit without earning any interest at all after their final maturity date.

Fortunately, one solution is to take the money from maturing bonds and transfer it into a 529 college savings plan account. Doing so lets you exclude the accumulated interest from taxation. Otherwise, you’ll have to pay tax on the entire increase in value from what you paid for the bond and what you received when you cashed it in.

Finally, your personal residence can be a ticking tax time bomb. Most homeowners get the benefit of one of the most lucrative tax breaks on the books: the capital gains exclusion of up to $ 250,000 for singles or $ 500,000 for joint filers. What that means is that if a couple saw their home rise in value from $ 300,000 to $ 800,000 over their lifetimes, they can sell it and pay no tax at all.

So how is this a tax trap? The potential problem is that the exclusion is available only for property that’s been used as your principal residence during at least two of the five years preceding the sale. There are special rules that reduce that requirement to just one year if you need to leave your home for long-term care in a nursing home or other institution, but failing to meet the requirement can eliminate the exclusion entirely. Moreover, if you decide to change the nature of the home to a nonqualified use — such as renting it out — then capital gain that’s attributed to the period of nonqualified use can be taxable.

The solution is to sell your home long before there’s any danger of losing the personal residence exclusion. Otherwise, you could turn the most profitable investment of your life into a major tax hassle.

Using these strategies wisely can save you huge amounts of tax. Yet by being aware that they can cause unintended problems if you’re not careful, you’ll be able to take full advantage of these strategies while avoiding the downsides.

These books could be game changers for your money

September 9, 2017 Admin Comments Off on These books could be game changers for your money

5 steps to making sure you're ready to retire

August 21, 2018 Admin Comments Off on 5 steps to making sure you're ready to retire