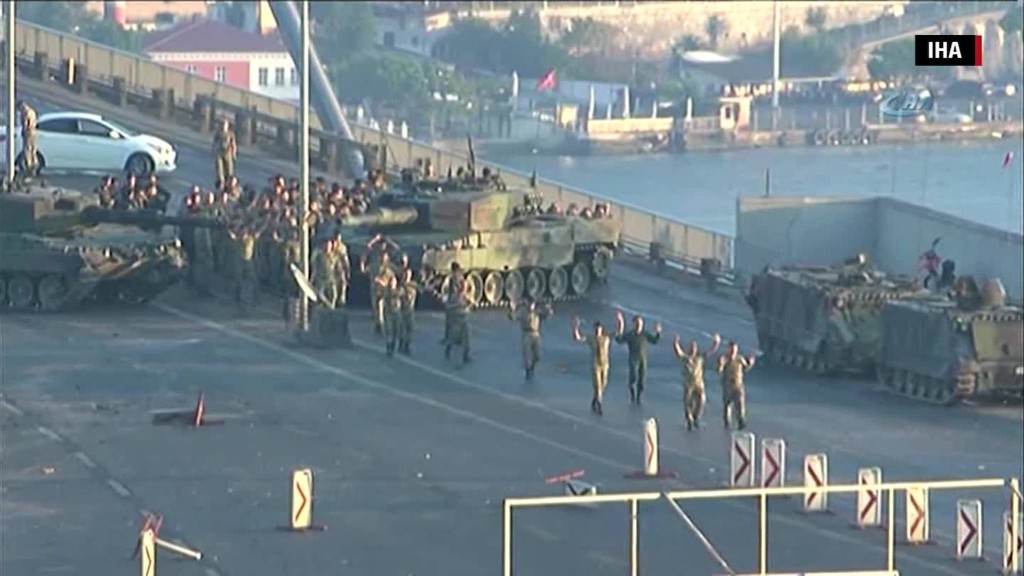 After a night of tumult in Turkey, Erdogan still stands

The world is a scary place… and several countries are becoming just too frightening for many tourists.

Millions of travelers have been nixing their dreams of visiting places like the pyramids in Egypt, the Eiffel Tower in Paris, the Tunisian coast and Istanbul’s Hagia Sophia due to heightened terrorism concerns.

Here are the countries that are among the worst hit:

Turkey’s title as the sixth most visited country in the world — right behind Italy — is seriously at risk.

“The recent political events in Turkey will be catastrophic for its travel industry,” warned Nadejda Popova, a senior travel specialist at Euromonitor International.

Tourist bookings to Istanbul have fallen every week since the start of the year, and plunged 69% in the week after the airport attack, according to travel intelligence firm ForwardKeys.

Ahead of the airport attack and coup, multiple deadly terrorist bombings in Istanbul and Ankara convinced many European travelers — mainly Germans and Brits — to holiday elsewhere, according to David Scowsill, CEO of the World Travel & Tourism Council.

Germany and the U.K. are among the top three biggest contributors to Turkey’s tourism sector, sending roughly 8 million tourists a year in total.

Russia, the second biggest market for Turkey, banned its citizens from visiting the country for eight months after Turkey downed a Russian war plane in December. That ban has just been lifted.

France is the world’s top destination for international tourists, welcoming over 80 millions visitors each year. It earns more money from tourism than any other European country, according to UBS.

But it too is losing visitors following a series of terror attacks. Friday’s attack in Nice, which killed 84 people, was the third in the last 18 months.

ForwardKeys data shows that international visitor numbers to France declined 11% in the five months after the Paris attack in November. And bookings to Nice dropped sharply after the attack last week.

Analysts at UBS say travel spending has fallen in France for the past eight months and slumped 18% in June alone. They cited data from Global Blue, which provides sales tax refunds in airports around the world.

Annual visitor numbers peaked above 14 million in 2010 but crashed to around 9 million last year, according to data from the United Nations’ World Tourism Organization.

Euromonitor expects visitor numbers will drop a further 20% this year.

The crash of EgyptAir flight 804 in May was initially suspected to have been caused by a terrorist attack, forcing many tourists to reconsider their travel plans. It’s still not clear what brought the plane down, but investigators have found evidence of a fire on board.

On top of that, an EgyptAir domestic flight was hijacked in March, and terrorists brought down a Russian plane that took off from an Egyptian tourist airport in late October.

This small country wedged between Algeria and Libya in northern Africa experienced a near 20% drop in international visitor arrivals in the first quarter of 2016 following two shocking terrorist attacks that targeted tourists.

The first attack in March 2015 saw assailants gun down visitors at a popular museum in the heart of the capital, killing more than 20 people. The next attack in June 2015 saw a gunman open fire on sunbathing tourists, killing 38 people, most of them British citizens.

Tourism levels in a country tend to take up to two years to recover when a terrorist attack directly targets tourists, according to Scowsill from the World Travel & Tourism Council.

“People will come to Tunisia again… but right now [the country is] having a very tough time and people are losing their jobs,” said Scowsill.

Tunisia used to welcome about 6 million to 7 million visitors a year before the attacks, but that seems unrealistic for 2016. International airline capacity to Tunisia has been cut by 25% for the summer, according to ForwardKeys.

— A version of this article was first published in June. It has been updated following last week’s attack in Nice, France and the attempted coup in Turkey.

Why it takes years to save for a down payment

January 14, 2017 Admin Comments Off on Why it takes years to save for a down payment