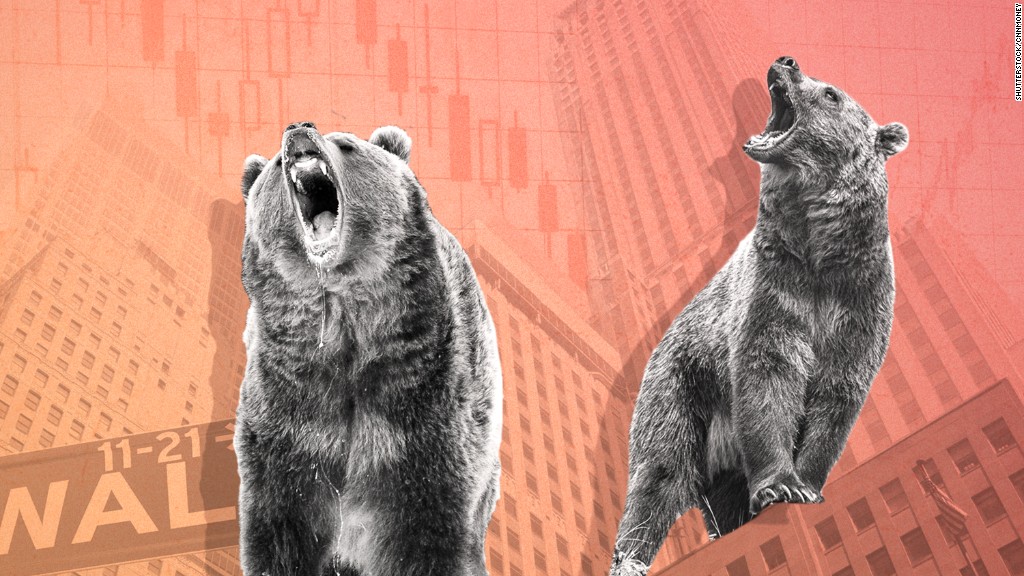 The Dow had its worst week in two years. Why?

Stocks were pummeled on Friday, capping the worst week in two years. Here’s what’s going on.

1. Concerns that the Fed will raise rates

Stocks have been rising steadily since the election in part because the economy is so strong. Unemployment is historically low, and there are more open jobs than people to fill them.

Companies are starting to pay workers more to retain existing employees and attract new hires. Businesses will eventually have to raise prices on the stuff they sell to afford their growing payrolls. In economics, that’s called inflation.

Though the economy has been growing steadily for almost nine years, inflation has remained stubbornly and mysteriously low. The Federal Reserve combats inflation by raising its interest rates. The central bank has been unable to significantly raise its interest rates over the past decade, fearing it could stymie the economic recovery and perhaps cause prices to fall.

The Fed planned on raising interest rates slowly this year — just three times in 2018. But if inflation picks up, the Fed could raise rates more often and more steeply than it had planned.

When the Fed raises rates, the cost of borrowing money increases. That means companies have to pay more for their loans, which cuts into corporate profits. It also means Americans will pay more for mortgages and loans.

Another reason the stock market has risen so much over the past year has been the steady growth in corporate profits. Companies are healthy, and investors have rewarded them by pushing up their stock prices.

3. Worries about the bond market

Stocks have also been on a tear because they have been one of the only investments with a decent return. U.S. Treasury bond yields have been so low that many stock dividends are paying better.

But stocks are a higher-risk investment than bonds, which are backed by the United States Treasury. If bond yields start to rise, investors will want to take some of their money out of stocks and put it into safer bonds.

Sure enough, bond yields hit a four-year high Friday. The recent tax bill has forced the Treasury to borrow more money, which will put more bonds into play. A supply glut could devalue bonds. Prices and yields move in opposite directions, and bond buyers will want a higher yield (and lower price) to make it worth their investment.

Inflation is bad for bonds, too. If borrowing costs increase, bond investors will want more return — a higher yield.

Attractive yields on a safer investment have made stocks suddenly less attractive.

Politics has played a part in stocks’ steady march higher, too. The Republican tax cut is great for corporate profits. Investors have rewarded companies’ promises of bigger stock buybacks and dividends by raising their stock prices. Business confidence is on the rise, in part thanks to the Trump administration’s push to cut regulation.

On Friday, the controversial release of a once-classified memo about the Russia investigation gave investors pause. Turmoil in Washington could be bad for business. It could create a logjam in Congress.

It’s not top of mind for investors, but it’s adding to their concerns.

Stocks have been rising pretty much in a straight line since November 2016, and that’s not exactly healthy. Stock market analysts believe the stock market is long overdue for a 5% pullback or even a 10% correction.

A cooling-off period would be a good thing. It would make stocks cheaper and more attractive to investors, especially if the underlying companies are healthy, cranking out strong sales and profits.

The market finally began to come down to earth — just a bit — this week, and investors wonder whether this is the beginning of a correction. There could be a little groupthink taking place in the downturn.

January 15, 2018 Admin Comments Off on Construction firm with 43,000 employees collapses

September 11, 2018 Admin Comments Off on Premarket: 6 things to know before the bell

March 22, 2018 Admin Comments Off on Premarket: 7 things to know before the bell