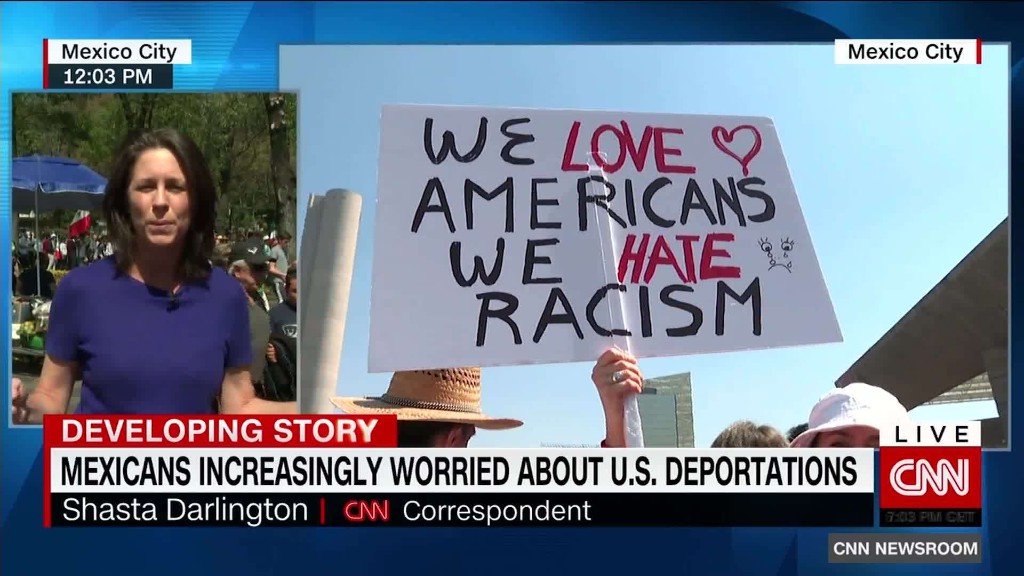 Protester: Trump will do a lot of harm to humanity

Hilda Roldan just wants a better life for her four kids. She always works overtime at a noisy textile factory here in Puebla, Mexico so her kids can get a college degree and don’t have to endure the same hard work.

“I wouldn’t like this work for them…I want the best for them. That’s why I stay an extra hour [at work] so they can move ahead,” Roldan told CNN’s Leyla Santiago while wiping away tears.

Roldan is a world away from President Trump in this blue collar town two hours southeast of Mexico City. But his presence — and the promise to bring manufacturing jobs back to the U.S. — looms large in her life.

Roldan makes, folds and neatly organizes the T-shirts at the factory. She works 60 hours a week, earning 850 pesos ($ 42). She’s proud her paycheck can help support her two daughters and sons, who range in age from two to 19.

She’s worked at the same plant for 10 years and giggles when she talks about how she knows the place inside out.

She fears Trump could take this job that she prizes so much. She says going north for work isn’t an option.

“The question is: What are we going to do?” Roldan asks. “I wouldn’t go” to the United States for work.

It’s manufacturing jobs like Roldan’s that Trump has promised to bring back to America. In 2000, there were 385,000 Americans working in textile mills. Today there are only 112,000, according to Labor Department data. More broadly, the U.S. has lost 5 million manufacturing job over that time.

Experts say the vast majority of those jobs aren’t coming back.

“There is no infrastructure to produce textiles in the U.S. nor are there workers who would be willing to work for those wages,” says Carlos Peyrelongue, a research analyst at Bank of Americ (BAC)in Mexico City.

Peyrelongue warns that bringing back jobs like Roldan’s to the U.S. would mean American shoppers would pay “substantially more, we’re talking, 30%, 40%, 50%, 100% more” for clothes because U.S. workers are paid a lot more.

Roldan doesn’t know the details of Trump’s potential trade policies, such as a possible 20% tax on all Mexican imports into the U.S. But they are besides the point: Trump is bad news in her eyes.

“I feel like all this would go down, economically,” says Roldan, referring to Puebla. “There’s going to be more vandalism, corruption — a lot more than what we are already living with.”

Roldan’s home state would be a prime target for Trump to bring manufacturing jobs of all types back to the U.S. It’s population has boomed since 1994 when NAFTA, the free trade deal between Canada, Mexico and the U.S., took effect.

Trump blames NAFTA for a flood of manufacturing jobs to places like Puebla, and threatens to withdraw from the deal if it isn’t improved to benefit U.S. workers.

“It has been a one-sided deal from the beginning of NAFTA with massive numbers of jobs and companies lost,” Trump tweeted on Jan. 26.

Congressional nonpartisan research in 2015 concluded that NAFTA wasn’t responsible for an exodus of jobs.

Still, workers from around Mexico have poured into Puebla over the last two and a half decades.

In 1990, the state of Puebla had 4.1 million residents. In 2015, over 6.1 million Mexicans called Puebla home. Car dealerships and manufacturing plants are everywhere here. Volkswagen’s largest plant outside of Germany is in Puebla. Audi just opened a plant in Puebla in September. You can’t miss trucks carrying newly finished cars.

While Roldan fears Trump puts her job at risk, her boss, Gustavo Bojalil, warns that Trump better be careful what he wishes for. Roldan might not go to the U.S. but Bojalil argues many other Mexicans workers will.

“If there’s less work here, what do you think is going to happen? More Mexicans are going to go to the United States,” says Bojalil, who employs 180 workers at his plant in Puebla.

July 27, 2018 Admin Comments Off on European carmakers win big as US backs off tariff threat