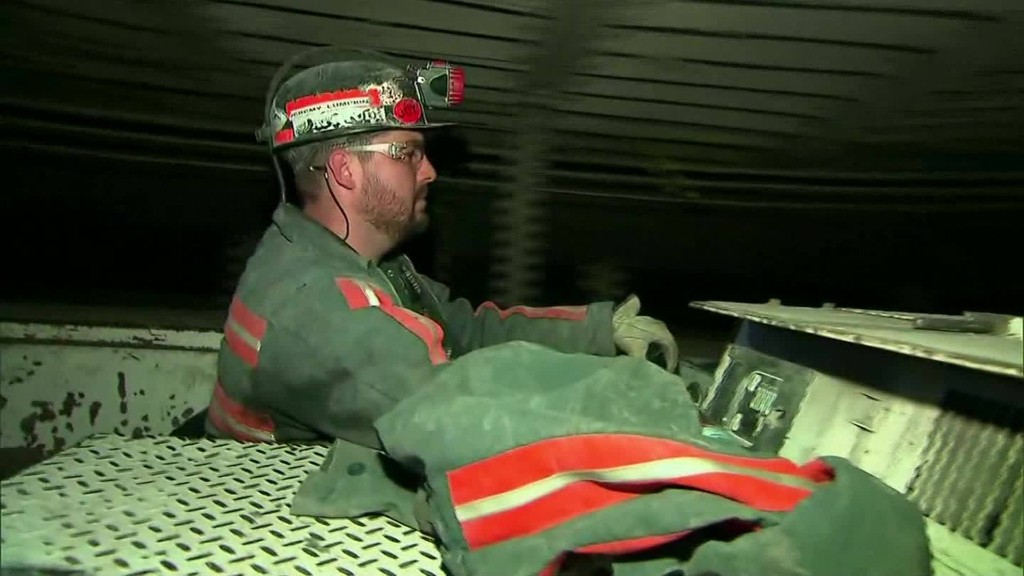 Can coal make a comeback under President Trump?

President Trump has promised to be coal country’s savior by ending Obama’s “war on coal.”

“We are going to put our coal miners back to work,” Trump promised at a March rally in Kentucky, a state he won on hopes he will be able to revive jobs in crushed coal communities of Appalachia.

But an in-depth analysis released Tuesday by Columbia University’s Center on Global Energy Policy warns that Trump’s regulation-busting is unlikely to spark a coal renaissance.

“Trump’s efforts to roll back environmental regulations will not materially improve economic conditions in America’s coal communities,” was the blunt assessment of the authors.

That’s because despite Trump’s bashing of Obama’s rules, regulation is not the sole — or even the main — culprit of coal’s demise.

At best, Trump’s deregulation push could “stem the recent decline” for coal. Even that is dependent on natural gas prices rising quite rapidly.

While coal has been suffering a slow demise, its pain has worsened in recent years. US coal jobs are down by nearly 50% just since the end of 2011 as several leading miners have gone bankrupt. Kentucky alone has lost an incredible 64% of its coal jobs since 2011.

Coal’s biggest problem is the abundance of cheap natural gas, thanks to the shale revolution. That market force is responsible for 49% of the decline in domestic US coal consumption since 2011, Columbia estimates.

The competitive disadvantage is stark. US power plants’ cost of production from natural gas plunged 71% between 2008 and 2016. By comparison, the report said coal prices fell just 8% over that span.

That’s bad news for coal because power generation accounts for more than 90% of domestic coal consumption.

At the same time, some power plants have begun using more renewable energy. The report estimates that wind generation has tripled since 2008 thanks to a 36% decline in costs, while solar power has expanded more than 40-fold amid an 85% plunge in prices.

Regulation did hurt coal, but not by as much as natural gas. Environmental rules led to the phasing out of coal-fired plants. However, that accounts for only a small chunk of the loss of coal production, Columbia finds.

Related: Trump is fixating on jobs he can’t bring back

That means that the short and medium-term future direction of coal is likely to be dictated by natural gas, not deregulation.

Even if prices of its chief competitor — natural gas — were to double from current levels, the report found coal demand would rise only “modestly” to 2013 levels, which is still 19% below the 2007 peak.

And if natural gas stays cheap? Columbia warns that coal consumption in 2025 could drop below the levels projected under Obama’s climate policies.

Despite an “aggressive rollback” of Obama regulations, coal employment would then shrink to 64,000 jobs.

The cheap natural gas scenario isn’t unlikely, given that Trump’s America First Energy plan relaxes restrictions on drilling, which will only increase the natural gas glut.

Related: Coal country to Trump: We want jobs of the future

The sobering analysis helps explain why even Robert Murray, CEO of the largest US private coal miner, told CNNMoney back in December that he asked Trump to “temper his expectations” about a coal comeback.

Trump could still help coal country in other ways, including by funding worker retraining programs that could allow miners to learn the skills for today’s jobs like computer coders.

The federal government could also help by safeguarding miners’ health benefits, cleaning up the land where abandoned mines sit on and investing in infrastructure and broadband to bring new jobs.

Politicians should be honest about the “unlikeliness of (coal’s) resurgence,” the Columbia authors wrote, “rather than offer false hope that the glory days can be revived.”

September 15, 2016 Admin Comments Off on Stocks: 5 things to know before the open

May 18, 2018 Admin Comments Off on PayPal buys Swedish startup iZettle for $2.2 billion