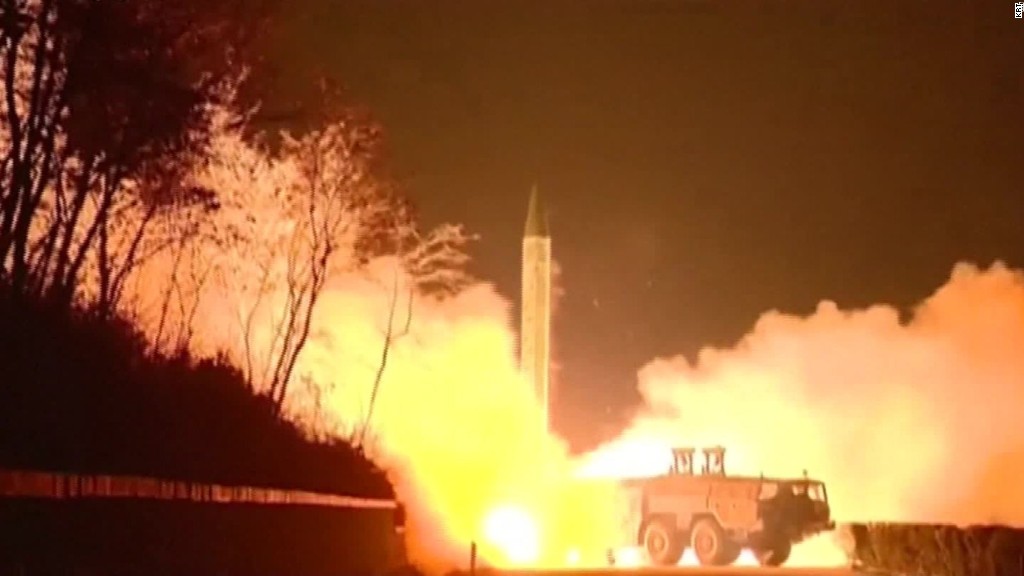 The Trump rally was built on the president’s pledge to unleash the American economy. But now Wall Street is being forced to confront rising global tensions, the latest with an unpredictable North Korea.

Despite Monday’s market bounce, there are a growing number of signs that investors have become more worried about the increasingly-precarious geopolitical situation.

CNNMoney’s Fear & Greed Index is firmly in “fear” mode and even briefly tipped into “extreme fear” to start off the week. Gold, which typically does well when investors are worried, has popped 3% this month to the highest level since the election.

The closely-watched VIX(VIX) volatility index has spiked 24% so far in March, though it remains at relatively low levels.

Cash is fleeing to the safety of government bonds, driving down Treasury rates. The 10-year Treasury yield has slipped to 2.22%, a dramatic reversal from a month ago when it sat at 2.62%.

Wall Street veterans point the finger mostly at a growing list of geopolitical risks: North Korea, Syria, Russia and the elections in France, to name a few.

“Just in over a week, we bombed Syria, our relations have deteriorated with Russia, we dropped the largest non-nuclear bomb on ISIS in Afghanistan and tensions with North Korea have significantly escalated,” said Kristina Hooper, global market strategist at Invesco.

“It certainly heightens volatility and increases downside risk,” she said.

“Our hope is that we can resolve this issue peaceably,” Vice President Mike Pence told CNN on Monday from the Korean Demilitarized Zone.

But Pence also said the Trump administration is “going to abandon the failed policy of strategic patience” and “redouble” efforts to bring diplomatic and economic pressure on North Korea.

His comments come days after the Pentagon sent the USS Carl Vinson supercarrier along with a guided-missile cruiser and two destroyers to the region.

Wall Street fears a military conflict with North Korea, which has a massive army commanded by the notoriously-unpredictable leader Kim Jong Un.

“The building tensions with North Korea are frightening,” David Kelly, chief market strategist at JPMorgan Funds, wrote in a report to clients on Monday.

Kelly said these concerns about North Korea “would likely alarm investors more had the world not seen many similar episodes in the past.”

Wall Street had been anticipating the Trump administration would take an isolationist stance. Investors have understandably been caught off guard by how many global incidents Trump has been pulled into recently.

“Geopolitics regarding Syria and North Korea is still a big factor keeping bulls at bay,” Michael Block, chief market strategist at Rhino Trading, wrote in a report on Monday.

“The fear is palpable,” Block wrote.

There’s also the April 23 French presidential election. One of the leading candidates is Marine Le Pen, who wants France to dump the euro — a move that would deal a serious, if not fatal, blow to the currency.

Related: Trump’s Syria airstrike a warning for Wall Street too

Of course, Wall Street isn’t exactly freaking out about geopolitical risks. The Dow shrugged off the latest North Korean headlines to rally about 100 points on Monday.

And there are domestic obstacles that investors need to confront as well.

The Trump rally was underpinned by his promises of infrastructure spending and “massive” tax cuts that would lift corporate profits and potentially stimulate the domestic economy. But Republican infighting, first over health care and now taxes, has dashed those hopes.

If anything, Trump’s focus on global headaches could further stall the domestic agenda that had inspired Wall Street.

Hooper said the Trump administration’s goal of tax reform by August “seems highly unlikely” and the delay could force markets to tread water or even take a tumble.

“Clearly, the market has gotten ahead of itself,” she said.

Dow poised for best year since 2013