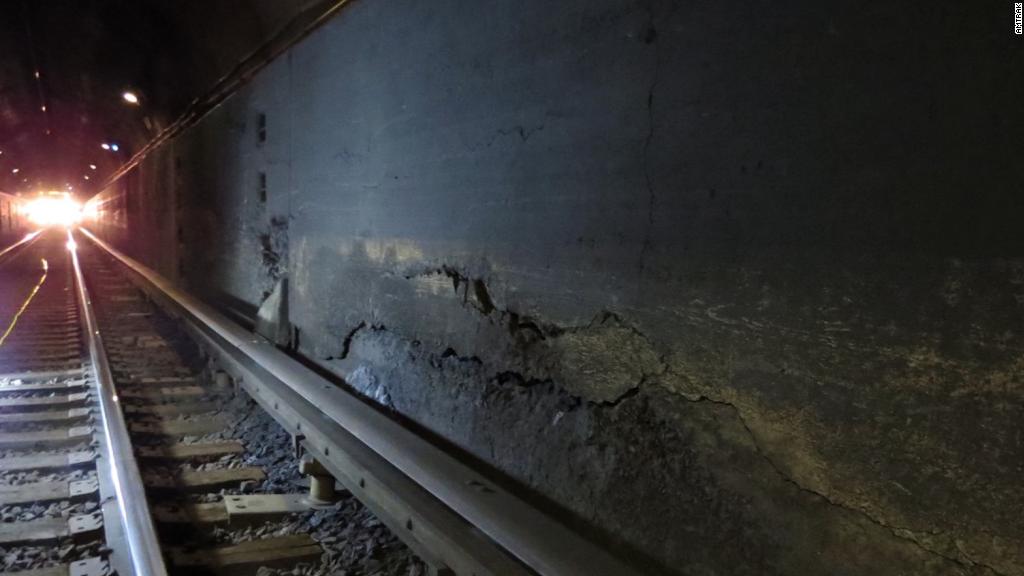 One of the oldest train tunnels in the U.S. needs help

In the State of the Union, President Trump announced a bold intention: Turning $ 200 billion in federal money into $ 1.5 trillion for fixing America’s infrastructure by leveraging local and state tax dollars and private investment.

Is creating that much funding from such a small number of federal dollars even possible?

Experts say yes, technically, but caution that such a large private sector add-on is far from guaranteed.

A White House spokeswoman told CNNMoney that their internal estimates found that the $ 200 billion could shake loose a total of between $ 800 billion and $ 1.5 trillion in other investments, but didn’t explain further.

Progressives have attacked the proposed $ 200 billion as woefully inadequate, saying that states and cities are already burdened by pension debt and would not be able to raise enough money to finance 80% of the cost of major projects, as a leaked draft of the proposal said would be required. (The White House has declined to comment on the draft, which was first published last week by Axios.)

“While [Trump] just gave away trillions in tax cuts to millionaires and billionaires, he is putting a pittance on the table and expecting cash-strapped state and local governments to come up with the lion’s share,” said Rep. Jan Schakowsky of Illinois on a press call this week organized by the Progressive Change Campaign Committee, a liberal advocacy group.

Related: What we know about Trump’s infrastructure plan

Left-leaning think tanks including the Economic Policy Institute and Center on Budget and Policy Priorities were also skeptical, pointing out that the Trump administration has previously proposed large cuts to infrastructure spending by Amtrak and programs like TIGER grants, an Obama-era pot of money for transportation projects awarded on a competitive basis.

Jeff Davis, a senior fellow at the Eno Center for Transportation, a nonprofit professional development organization that publishes research on transportation issues, said that while it’s feasible to drum up $ 1.5 trillion in total spending with $ 200 billion in federal money, the proposal relies on some dubious assumptions.

To understand the White House’s argument, Davis walks through the math. According to the leaked draft, half of the $ 200 billion will go toward incentive grants that can only make up 20% of any given project, so that part would lead to $ 500 billion in total investment.

Another $ 70 billion would go toward grants for rural areas and “transformative” projects that are more experimental, with the feds picking up between 30% and 100% of the tab. Davis saidthat amount can leverage about $ 20 billion, so let’s be generous and round up the total to $ 100 billion.

So far, $ 170 billion from Washington has gotten us to $ 600 billion in total investment, with $ 30 billion in federal spending left, according to Davis’ calculations. Where does the extra $ 400 billionto $ 900 billion come from?

Most of it, Davis said, can be found in the fine print of the leaked draft: Beefing up funding for the federal infrastructurecredit programs that provide loans, loan guarantees and lines of credit totransit agencies and utilities for everything from highway expansions to desalination plants.

Recent loans through these programs have leveraged about $ 15 million for every $ 1 million of credit assistance. If such loans were only part of a financing package, the leverage ratio could get as high as 45-to-1, although Davis found in 2015 that there weren’t enough projects that could qualify for assistance under the program’s rules. In many cases, the projects were too big of a credit risk or they did not have all the proper permits.

“These assumptions may be fanciful, but they are bipartisan,” Davis said, noting that Democrats have also counted on small amounts of federal capital pulling in enormous amounts of private and local money.

People who facilitate private investment in public infrastructure, such as pensions and private equity funds, think Trump’s proposal could make a lot of deals happen that otherwise wouldn’t happen.

“Literally dozens of these funds have been raised for the purpose of investing in infrastructure,” says Kent Rowey, a partner in the firm Allen & Overy who specializes in public private partnerships. “There’s more product than demand at the moment, because we haven’t had the catalyst at the federal level to really kick it into high gear. … It’s a terrific idea.”

Private investors can be paid back either through user fees, like highway tolls, or by other dedicated revenue streams, like sales taxes. But Rowey acknowledges that model works best in large population centers with robust tax bases, not rural areas or shrinking Rust Belt towns that could really use the help.

Also, as a report by the Democratic staff of the Joint Economic Committeeargued, relying on private investment is risky and can cost more than direct taxpayer funding, since investors expect a healthy return. In the past, some public-private partnerships have been poorly negotiated and shut out competition that would have resulted in better pricing and improved public services, the report said.

That makes leveraging $ 1.5 trillion in investment with $ 200 billion in funding technically possible — but perhaps not entirely wise.

Russia dumped 84% of its American debt. What that means

July 31, 2018 Admin Comments Off on Russia dumped 84% of its American debt. What that means

Many 2012 Republican campaign promises have come true under …. Obama?

July 24, 2016 Admin Comments Off on Many 2012 Republican campaign promises have come true under …. Obama?