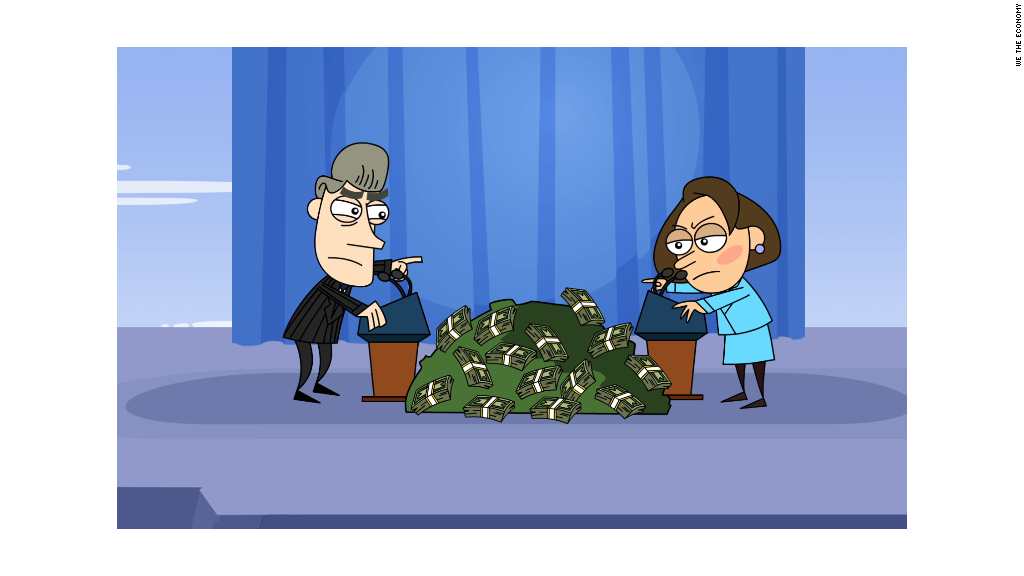 Debt vs. deficit: What’s the difference?

U.S. debt is likely to double as a share of the economy over the next 30 years, according to the Congressional Budget Office.

Considering President Trump’s push for big tax cuts and a promise not to touch key drivers of the debt, the picture could worsen.

Right now the nation’s debt amounts to 77% of GDP. That’s already the highest level since the post-World War II era. If current law remains in effect, it’s on track to jump to 150% by 2047, according to the latest long-term budget projections from the CBO.

The problem is that while both spending and revenue are projected to grow, spending will far outpace revenue.

The northward trajectory of spending is driven exclusively by two things: Spending on the biggest entitlement programs (primarily Medicare, Medicaid and Social Security) and interest on the debt.

The major entitlement programs, which fall under the category of mandatory spending because the levels are determined by formulas and number of beneficiaries, account for 10.4% of GDP today. By 2047, the CBO projects they will grow to 15.5% a year.

The president said many times — and his surrogates have repeated his promise — that he would not touch Medicare or Social Security.

Interest on the debt, meanwhile, will almost quadruple — from 1.4% today to 6.2% by 2047. That’s due to rising rates and the growing pile of borrowed money.

By contrast, spending on all other mandatory programs and on discretionary programs (funding for which lawmakers decide on every year) are both on track to fall as a share of the economy.

Strong economic growth can alleviate the country’s debt burden somewhat. But the CBO is projecting real GDP increases of just 1.9% a year on average for the next 30 years. That’s a percentage point lower than the average ofthe past 50 years, and far lower than the4% annual growth promised by President Trump.

The agency expects a slower rise in GDP thanks to slower growth of the labor force. That’s mostly due to an aging populationplus the fact that the number of women in the workforce has stabilized after increasing for decades.

The CBO also expects that rising federal debt will draw investors’ money away from private investment.

Trump has often complained about how high the country’s debt is. But his policies and proposals don’t do anything to address it.

The first part of his 2018 budget proposal calls for big cuts to domestic programs — the smallest part of the federal budget. But they would justpay for his proposed increases in defense spending. So the cuts, which would have a big effect on the programs, would be a wash in terms of deficits.

Meanwhile, analyses of Trump’s previous tax proposals found they could add $ 7 trillion to the debt in the first decade alone.

Related: Trump budget bemoans $ 20 trillion debt but does bupkus about it

The White House is now promising yet another tax reform proposal — one which would offer tax cuts for the middle class and reduced tax rates and other changes to make businesses more competitive. But on Thursday, Press Secretary Sean Spicer said planning was still in the early stagessohe couldn’t say yet whether the final plan would be fully paid for or would add to deficits.

October 11, 2017 Admin Comments Off on No, the estate tax isn't killing family farms

Donald Trump says he sold all his stocks in June

December 7, 2016 Admin Comments Off on Donald Trump says he sold all his stocks in June