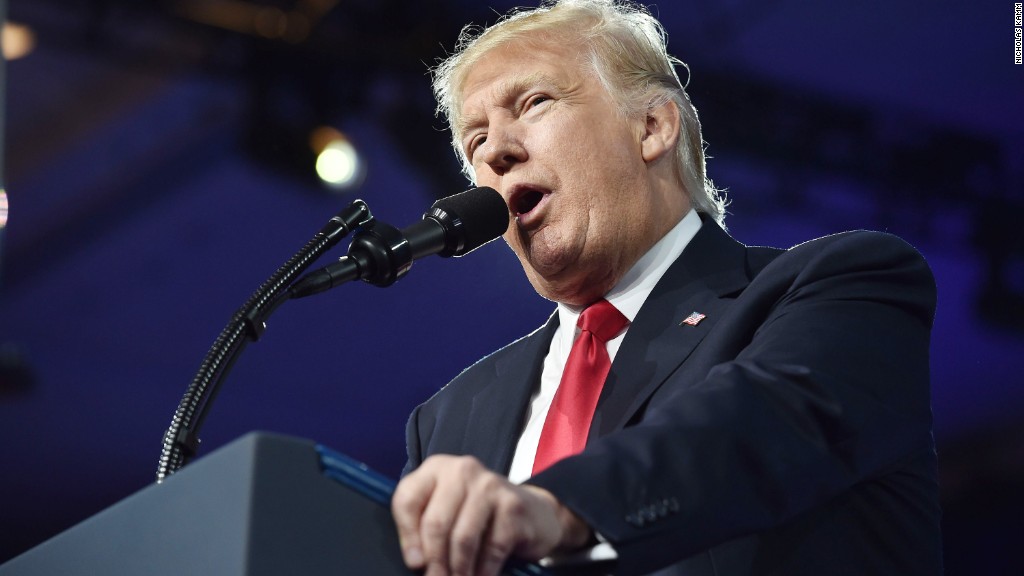 Trump: We will repeal and replace Obamacare

A draft of the House Republicans’ bill to repeal Obamacare would replace its subsidies with less generous tax credits, increase the amount insurers could charge older Americans and effectively eliminate Medicaid for low-income adults.

These provisions could leave a significant share of the 20 million people who gained coverage under Obamacare without insurance. The proposal would go fully into effect in 2020.

The draft bill, which was dated two weeks ago and was obtained by CNN Friday, closely follows House Republicans’ previous proposals to repeal Obamacare, though it actually offers somewhat larger tax credits and stronger protections for those with pre-existing conditions. The bill, which was first reported by Politico, has been updated since, but remains in the “same ballpark,” a GOP source told CNN. Lawmakers plan to release a final version of the bill the week of March 6.

This framework, however, would likely not be enough to allow everyone to keep their plans.

Ohio Governor John Kasich, a more moderate Republican, said he “completely” disagrees with the draft legislation and the sizeof the tax credits. He said he discussed it with President Trump in their meeting Friday.

“I just told him it was inadequate,” Kasich told reporters. “To me, it’s not acceptable.”

On top of that, it’s questionable whether some of the provisions outlined in the draft bill could be accomplished through budget reconciliation — the Republicans’ chosen method for repealing Obamacare because it only requires a simple majority in the Senate. Legislation passed under reconciliation must be tied to federal spending and revenues. Insurance reforms, such as eliminating federal mandates on what benefits insurers must cover and allowing insurers to charge older Americans more,do not appear to be allowed, experts said.

Related: Republican governors on Obamacare repeal: Not so fast

Also, it remains unclear how the Republicans would pay for the plan. The GOP legislation eliminates all Obamacare taxes quickly, but keeps the law’s subsidies and Medicaid expansion spending until 2020. It only contains one provision that would raise revenue — capping the tax exclusion on employer-sponsored plans.

Here’s what the proposal would do:

Replaces income-based subsidies with age-based tax credits: Instead of getting a subsidy based on your income and the premiums in your area, you’d receive a refundable tax credit based on your age. The creditswould range from $ 2,000 for those under 30 to $ 4,000 for those between age 60 and 64. (It does not apply to those on Medicare.)

While these credits are more generous than those laid out in a plan proposed in 2015 by former Representative Tom Price, now the health secretary, they still may not be enough to make coverage affordable for everyone, particularly for older folks, lower-income Americans or those living in areas with high medical costs.

That’s because the GOP tax credit doesn’t take into account income or the price of insurance plans in a certain arealike the Obamacare subsidies do. And it would not provide as large a subsidy for older enrollees, who pay up to three times as much for coverage as younger ones. (The GOP plan calls for increasing this ratio to up to five times as much, leaving older participants to foot an even larger share of the premium after their tax credit.)

Related: One thing Paul Ryan’s health care plan has in common with Obamacare

Obamacare’s subsidies, on the other hand, alloweligible enrollees to buy a plan for less than 10% of their income.

Eliminates Medicaid expansion funds and caps federal spending: The draft legislation doesn’t repeal Medicaid expansion for low-income adults, but it eliminates the enhanced federal reimbursement for new enrollees starting in 2020. Since many people drop out of Medicaid during the course of a year, the number covered under expansion would dwindle over time.

Under Obamacare, states got more federal matching funds to cover newly eligible, low income adults. The federal government paid 100% of the costs of these new participants for the first three years and is slowly reducing the reimbursement to 90% by 2020. It covers between 50% and 74% of the cost of the traditional Medicaid population, depending on the state.

The Republican bill also calls for overhauling the way the federal government pays for all Medicaid recipients. Instead of reimbursing states a share of what they spend, it would send a fixed payment per participant. The amount would be based on the state’s average spending in fiscal year 2016, with an adjustment for inflation.

Allows insurers to charge more to those who let coverage lapse, but protects those with pre-existing conditions: The Republicans would eliminate the individual mandate as of last year — so those who didn’t have coverage wouldn’t have to pay the penalty. And there’d be no requirement to get insurance going forward.

But to encourage Americans to maintain coverage, lawmakers would allow insurers to chargethose who had lapsed up to 130% of the premium for the first year once they re-enroll.

Republicans consider this provision to be the stick that will entice all Americans — particularly the young and healthy — to remained insured. It’s critical to keep these folks in the market since they offset the costs of those who are older andsick.

Since Republicans would keep Obamacare’s ban on discriminating against people with pre-existing conditions, the creation of state-based, high-risk pools to cover the sick who can’t get insurance would be less important. Instead, the legislation calls for giving states $ 100 billion over nine years in innovation grants to help cover high-cost enrollees. States could use the funding in a variety of ways, including reducing insurers’ cost of covering these policyholders, lowering people’s out-of-pocket costs or providing financial assistance to high-risk enrollees in the individual market.

Related: The many reasons Republicans are stuck on Obamacare repeal

Among the most controversial would beeliminating funding for Planned Parenthood and barring the use of tax credits to pay for policies that cover abortion.

Another one that will meet with a lot of resistance is capping the tax break on employer-sponsored coverage. Currently, those premiums are excluded from tax, which economists argue dampens wages and encourages unnecessary use of medical care. The Republican plan would limit the exclusion to the cost of the 90th percentile plan nationwide — that is, the priciest 10% of plans would have to pay tax on the premiums above this threshold. This would replace Obamacare’s reviled Cadillac Tax, which was delayed until 2020 amid pressure from companies and unions.

The bill would also increase how much people could sock away in Health Savings Accounts to the amountoftheir deductible and out-of-pocket limit.

Congressional Democrats were quick to jump on the bill, saying it would hurt many Americans.

“Not only would it force working families to pay more for less coverage, it would make drastic cuts to Medicaid and cause millions to lose their coverage altogether,” said Representative Steny Hoyer.

The bill is also a mixed bag for insurers. It gives them more latitude in what they must cover and how much they can charge older participants. But it requires them to continue covering those with pre-existing conditions without the individual mandate to bring in younger and healthier enrollees.

The elimination of the mandate could prompt carriers to drop out of the individual market, Levitt said. Already, Humana(HUM) has announced that it will not participate in 2018, and several other large carriers are weighing their involvement.

“This is what terrifies insurers,” Levitt said.

CNN’s Manu Raju and Phil Mattingly contributed to this report.

The truth about the Republicans' plan for Medicaid spending

July 1, 2017 Admin Comments Off on The truth about the Republicans' plan for Medicaid spending