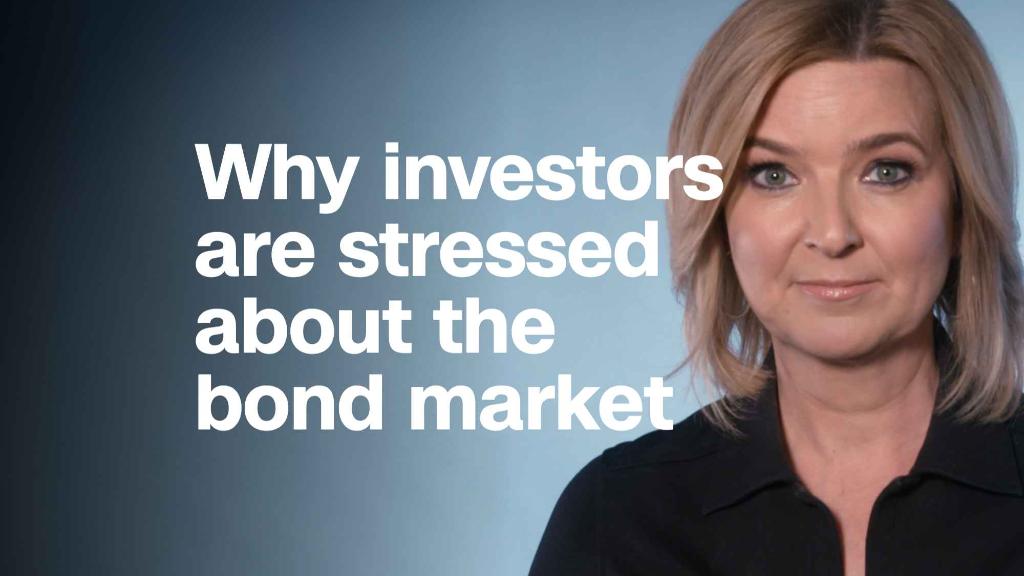 Why investors are stressed about the bond market

America’s economic growth slowed at the beginning of 2018 as household spending stalled in spite of recent tax cuts.

The US economy grew at a rate of 2.3% in the first quarter, according to the Commerce Department’s preliminary report on Friday. That’s slower than the 2.9% pace in the fourth quarter of 2017. Economists surveyed by FactSet had expected a 2% growth rate.

The pace of growth is solid, though less than the 4% President Donald Trump had promised during his presidential campaign.

“The report was good but not great,” said Gus Faucher, chief economist at PNC.

Muted household spending was the catalyst for the drop-off.

Consumer spending, which accounts for more than two-thirds of the economy, eased to a 1.1% rate last quarter, its weakest in nearly five years.

Last quarter, spending grew at a robust 4% clip. Economists believe it jumped toward the end of last year in anticipation of tax cuts and as hurricane-damaged areas of the country spent more to replace cars and trucks.

Related: U.S. economy picked up in 2017, but growth slowed at year’s end

Congress passed a $ 1.5 trillion tax cut at the end of 2017. Economists say sluggish consumer spending demonstrates they are not yet fully feeling the benefits of the legislation in their wallets.

“The report was a slight disappointment since the tax cuts should have provided an immediate boost,” Paul Ashworth, chief US economist at Capital Economics, said in a research report.

But economists attributed the spending drop to seasonal effects and a pullback after the strong holiday shopping season. The winter months have historically been the weakest quarter of the year.

The San Francisco Federal Reserve even published a 2015 report about the “puzzle of weak first-quarter GDP growth” that suggested sluggish data to start the year was more of a statistical problem than a signal of a struggling economy.

Economists believe the combination of tax cuts and a tight labor market, which encourages employers to give more favorable pay and benefits to attract and retain workers, should boost spending in the coming months.

Related: Looking for a job? New hires are getting paid 5% more than they were a year ago

“Some slowing was to be expected,” Faucher said. “I think the fundamentals for consumer spending growth in the rest of 2018 are very good. We have good job growth and wage growth is accelerating, plus tax cuts are boosting paychecks.”

Brian Coulton, chief economist at Fitch Ratings, agreed: “With consumption growth likely to bounce back and fiscal stimulus about to kick in big-time, there are probably more upside than downside risks,” he said.

Despite the slower growth, the US economy remains in strong shape. Unemployment is at 4.1%, the lowest in 18 years. It’s close to what economists consider full employment. Business and consumer confidence remain high.

“Economists across the street seem to agree that there is unlikely to be anything sinister going on behind the slowdown,” Morgan Stanley economists said in a research report. They expect a bounce back in the coming months, and preliminary estimates point to 3.6% growth in the second quarter.

The weaker quarter is unlikely to change the Federal Reserve’s path to raising interest rates to stave off inflation, economists and Wall Street analysts say. Wall Street has been volatile in recent months about inflation expectations and the Fed’s plan, but ignored the data Friday. The yield on the 10-year US Treasury note dropped to 2.96% after crossing the 3% marker earlier this week for the first time since 2014.

“What all this means for the Fed and its rate hike cycle is really nothing,” Peter Boockvar, chief investment officer at Bleakley Advisory Group, wrote in an email.

The United States is expanding more quickly than the British economy.

GDP in the UK grew by just 0.1% for the first quarter as uncertainty over the UK’s exit from the European Union next year crimped business investment and weighed on construction. The Bank of England is unlikely to raise interest rates after the tepid rise. The European Central Bank is also holding firm on interest rates and continuing its stimulus package as the bloc struggles to grow.

U.S. July jobs report: What to watch for

August 5, 2016 Admin Comments Off on U.S. July jobs report: What to watch for

GE could get rocked by Trump's tariffs

March 8, 2018 Admin Comments Off on GE could get rocked by Trump's tariffs