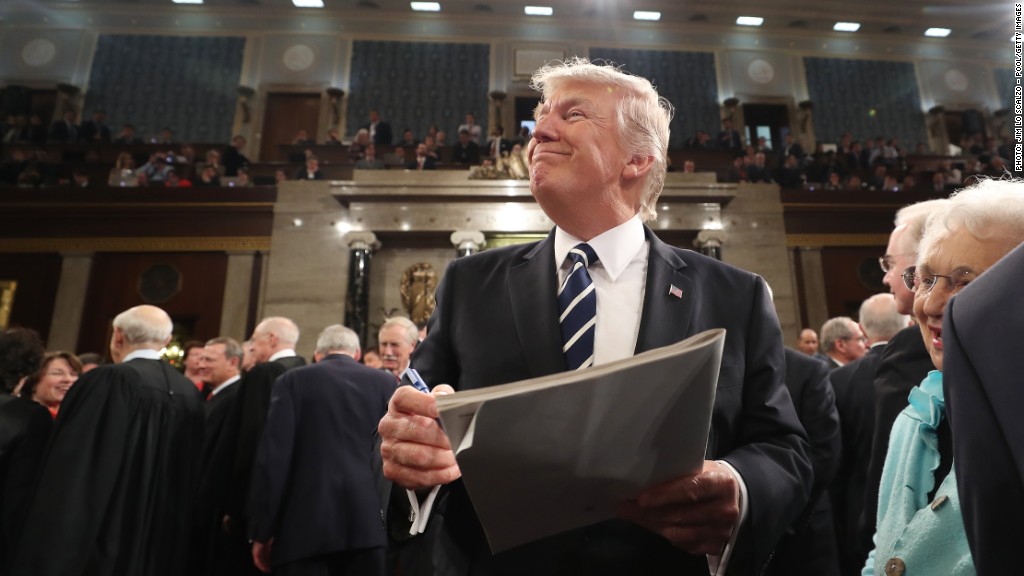 Trump’s speech to Congress in 90 seconds

President Trump said something last week that should have perked the ears of every American parent (and wannabe parent).

In a speech to Congress and the 47 million Americans who watched on TV or online, Trump endorsed paid time off for mothers AND fathers. It was a bold move for a Republican president.

“My administration wants to work with members in both parties to make childcare accessible and affordable, to help ensure new parents have paid family leave, to invest in women’s health, and to promote clean air and clear water,” he said.

Notice that Trump didn’t say paid leave for moms, he said paid FAMILY leave. That’s a much bigger promise than what he said on the campaign trail.

When he was running for office, Trump rolled out a plan to give six weeks of paid maternity leave, but only for working moms who give birth. Family leave typically means paid leave for moms and dads and for people caring for a really ill relative (e.g. a 75-year-old parent who has a stroke).

The White House refused to clarify if Trump’s policy has truly changed, but the wording shift meant a lot to moms, dads and activists pushing for change.

“It’s critical that it’s shifting to paid family leave and away from maternity leave,” says Victoria Budson, executive director of Harvard’s Women and Public Policy Program. Budson points to a lot of research showing that dads need time to bond with babies as well, and that America’s aging Baby Boomers are likely to put strain on their younger relatives who have to care for them.

Many credit his daughter, Ivanka Trump, for lobbying her father — and Republicans in Congress — to end America’s status as the only industrialized nation that doesn’t offer any paid leave for new mothers.

But it’s not just Ivanka that’s pushing for this. The vast majority of Americans (72% according to an AP poll last year) support it, and marquee U.S. companies like Facebook and American Express keep expanding their family leave programs by offering four months or more of paid leave. They believe it’s the best way to attract and keep top talent.

“This is one of the policy issues where there is tremendous support from the American public,” says Budson.

Not a perfect plan

Trump hasn’t unveiled any more details about his plans for child care or paid family leave since he took office. Ivanka has been working with GOP Congresswomen Cathy McMorris Rodgers of Washington and Marsha Blackburn of Tennessee to craft legislation. Both offices declined CNNMoney’s request for comment.

While some praise the president and Ivanka Trump for pushing forward on this issue that has long been controversial in Republican circles (President George H.W. Bush vetoed a bill for unpaid family leave in the late 1980s because he didn’t want to impose more federal regulations on companies), others say the current Trump plan needs a lot of improvement.

“It’s too little. Even worse, maternity leave only is actually a step in the wrong direction,” says Ellen Bravo, co-executive director of Family Values @Work. Bravo says the U.S. needs to do “at least” 12 weeks of paid leave. Trump is only proposing six. There’s also concern about whether the Trump plan would cover families that adopt children.

Bravo is also skeptical of Trump’s plan to pay for this program, which the right-leaning American Action Forum estimates will cost $ 2.3 billion to $ 4 billion a year. During the campaign, he said the money would come from state unemployment insurance programs, but many of those are already low on funds and they usually provide only about half of a worker’s prior pay, according to the left-leaning Center on Budget and Policy Priorities.

Poor families wouldn’t be able to afford to take time off if they get only half their pay (or less), says Harrington of the Center for Work and Family.

Still, there’s optimism that the Trumps may be able to bring Republicans to the table on this issue. Democratic Senator Kirsten Gillibrand crafted legislation known as the FAMILY Act that would would give up to 66% wage replacement for 12 weeks to workers who need to take time off to care for family. The bill repeatedly stalled in recent years, largely on party lines.

“Everything seems impossible until someone decides to do it,” says Budson.

To email the reporter on this story, write to heather.long@cnn.com.

So far, Obamacare isn't hurting the economy or killing jobs

December 10, 2016 Admin Comments Off on So far, Obamacare isn't hurting the economy or killing jobs

Who wins and loses under the House GOP tax bill: Let the wonkery begin

November 6, 2017 Admin Comments Off on Who wins and loses under the House GOP tax bill: Let the wonkery begin