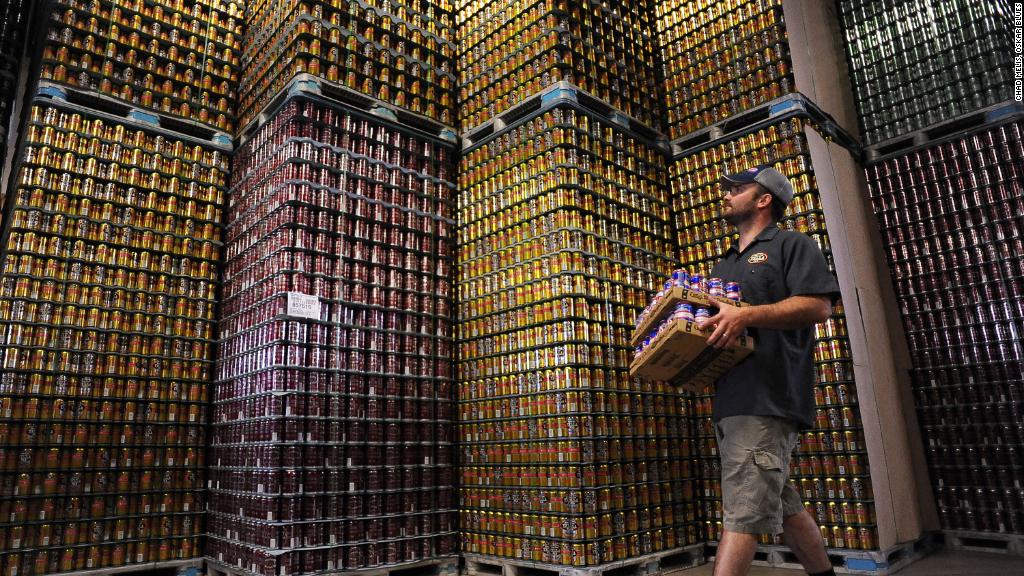 President Trump cheered last week that the “raging” economy is at an “all-time high,” mirroring optimism on Wall Street and Corporate America about a stellar year for growth.

Unfortunately, predictions for first-quarter economic growth have plunged in recent weeks, signaling 2018 may be off to a “meh” start.

Barely a month ago the Atlanta Federal Reserve predictedbooming growth of 5.4% for the first three months of the year. But stingy spending by American consumers has forced the Atlanta Fed to dramatically scale back its outlook. The call is now for GDP growth of a rather pedestrian 1.8%.

Goldman Sachs(GS), Barclays and other Wall Street firms have similarly trimmed their growth forecasts below 2%.

That’s despite rising confidence among American families, CEOs and small business owners in the wake of Trump’s $ 1.5 trillion tax cuts.

“We’re seeing a lot of positive fervor from consumers and businesses, but that hasn’t translated into action yet,” said Kristina Hooper, Invesco’s global market strategist.

Even though consumer confidence hit a 17-year high last month, retail sales unexpectedly declined between January and February. It was the third-straight monthly drop, a disappointing trend given that consumer spending drives two-thirds of the economy.

The good news is that the economic backdrop looks strong despite the recent soft patch. Consider the blockbuster February jobs report that revealed a surge of 313,000 jobs.

Growth is expected to accelerate later this year, especially as the effects of the tax law are felt.

Related: 10 years after the financial crisis: What have we learned?

The uninspiring start to the year also fits into a recentpattern, where growth starts dull and then rebounds. The San Francisco Fed even published a 2015 report about the “puzzle of weak first-quarter GDP growth” that suggested it’s more of a statistical problem than a real one.

“We shouldn’t worry too much about it. Historically, first-quarter GDP tends to be weak,” said Hooper.

There may be one-time forces weighing downthe economy as well. Most notably, the destruction of more than half a million cars by Hurricanes Harvey and Irma created a surge of demand that lifted the economy at the end of 2017.

“The post-hurricane bounce is fading. It’s a boom and bust for autos, but not indicative of the economy rolling over,” said Michael Gapen, chief U.S. economist at Barclays.

The tax law may also be playing a role here.

Morgan Stanley said enthusiasm over the coming tax cuts “pulled forward spending” into the final three months of last year, “leading to payback” in the beginning of 2018. In other words, people spent more than they would normally prior to the tax law getting enacted and now they’re cutting back.

“There appears to be nothing sinister going on among America’s households,” Morgan Stanley economic Michel Dilmanian wrote in a recent report.

Other people are likely waiting to see how the wide-reaching tax law impacts their personal finances before splurging on a large purchase like a TV or refrigerator.

“This is a complicated tax package. Consumers are still figuring out the impact,” said Hooper.

Bigger picture, there remains a lot of optimism about the economy over the rest of 2018.

Economists think it’s possible that growth hits 3% for the year, meeting the Trump administration’s goal. The Federal Reserve may even reveal an upgraded economic outlook on Wednesday.

It certainly helps that the economy is poised to receive a double boost from the impact of the tax law and a bipartisan agreement in Washington ramp up spending by about $ 300 billion.

Of course, adding all that help to an already-healthy economy could backfire if it creates so much inflation that it forces the Fed to cool things down with aggressive rate hikes.

The other major risk is that Trump’s trade crackdown goes horribly wrong. Major trading partners have already vowed to retaliate against Trump’s steep tariffs on steel and aluminum tariffs.

Next, Trump wants to confront China’s alleged theft of intellectual property, setting up a potential trade war between the world’s two biggest economies.

“The anti-trade and anti-immigration parts of the Trump administration’s agenda are not growth friendly,” said Gapen.

“Do we get into a tit for tat? That’s a massive risk to the outlook,” he said.