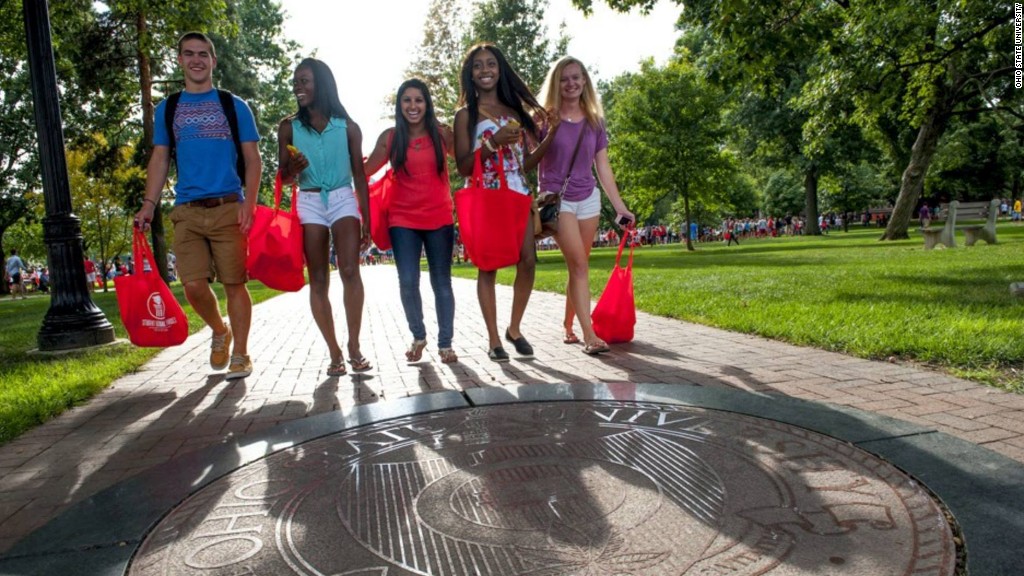 Presidents at 30 of America’s top colleges say they’re missing out on some of the best and brightest students — those from low-income families.

“We know we admit many more students from the upper half of the income distribution than the lower half and we believe that talent is distributed much more evenly than that,” said Ohio State University President Michael Drake, who’s on the steering committee of the American Talent Initiative.

The alliance brings together a mix of public and private colleges including Ivy League institutions like Harvard and Yale, small liberal arts schools like Franklin and Marshall College, and state schools like Georgia Tech and the University of Maryland.

The idea is to encourage colleges with the highest graduation rates to enroll and graduate more low-income students.

“The 50,000 is based on research that show there’s about that number of students who would qualify for our institutions today who are not there,” Drake said.

The admissions process won’t change, he said. These students qualify just like everyone else. But they don’t apply for a variety of reasons, whether they think college is too expensive or they’re simply not aware of all their options.

Lowering the cost of college with financial aid is one way to increase enrollment of low-income students. Drake has already shifted some money from merit-based to need-based aid for OSU students.

Vassar College, for example, has committed to increasing the amount of its endowment earnings used toward financial aid, according to a report put out by the American Talent Initiative.

But colleges plan to change their recruitment strategy and reach out to these students directly, too. They also need to offer the support services needed to keep them enrolled and to graduate on time.

Franklin and Marshall College, which has more than doubled the number of low-income students over the past eight years, has formed partnerships with high performing K-12 schools to recruit potential students and created a pre-college summer program to help prepare them before they arrive on campus.

The investment is worth the cost at OSU, according to Drake. Making the student body more diverse will benefit everyone.

“I teach stilland I know that undergraduates who come from different places … have different points of view and experiences and they make the discussions more rich,” Drake said.

Related: I grew up in poverty and I’m graduating from Stanford

Increasing socioeconomic diversity isn’t a brand new idea. Most Ivy League Colleges give very generous financial aid packages to their lowest income students. At Harvard, for example, any family earning less than $ 65,000 pays nothing. And a growing number of colleges no longer require applicants to submit their SAT or ACT scores, because they can be biased against students from low-income households.

But previous efforts don’t go far enough, according to a recent study from The Equality of Opportunity Project. The share of the low-income students at elite colleges increased very little since 2000, and has declined at mid-tier institutions.

The report measures success by upward mobility, or the percent of students from the poorest families who graduate and end up making much more money than their parents. It found public schools have so far done this best.

November 23, 2016 Admin Comments Off on Black Friday sales: Deal or no deal?

How women over 50 can reinvent their careers

June 20, 2018 Admin Comments Off on How women over 50 can reinvent their careers