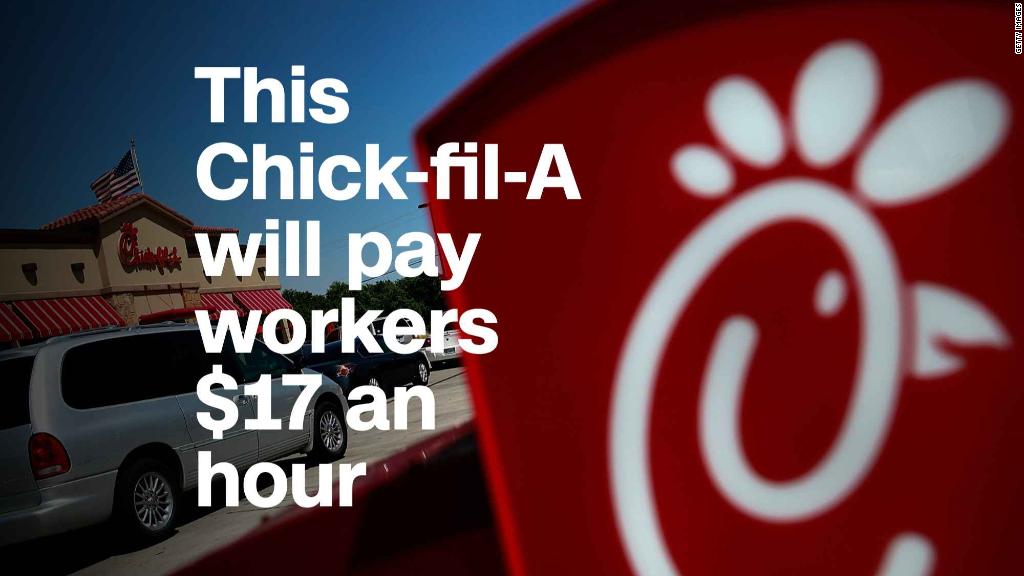 This Chick-fil-A will pay workers $ 17 an hour

Fast food jobs pay some of the lowest wages in the country, giving workers little reason to stick around if they get a better offer and proving costly to employers who need to find people to replace them.

In California, one Chick-fil-A franchisee says he’s trying to break the cycle.

Eric Mason, who for the last three years has owned a Chick-fil-A off the highway near the Sacramento airport, says that next week he’ll start hiring “hospitality professionals” starting at $ 17 an hour, up from the $ 12 to $ 13 an hour he pays now.

“When we go to the living wage, we’re looking for people who are trying to raise families, improve their lifestyle,” he told ABC10 News on May 26. “Maybe they could just work one job, and then it’s sustainable. What that does for the business is provide consistency, someone that has relationships with our guests. It’s going to be building a long-term culture.”

Mason’s marketing manager Marena Weisman confirmed to CNNMoney that the franchise would be hiring between 35 and 45 people at the new rate, for work in both the front and the back of the house, and that all current employees are encouraged to apply for the positions.

Related: The case for raising the minimum wage keeps getting stronger

According to the Bureau of Labor Statistics, fast food cooks in the Sacramento area make an average of $ 11.42 an hour, about a dollar higher than the national level.

“All responsible employers are preparing for the impact of the increasing minimum wage, but they are usually doing it over time and planning for it,” says Carey Klosterman, director of research and compensation services at the California Employers Association.

One reason why: Even employees making just a little bit more than the minimum wage tend to expect raises too. So if employers raise wages too quickly, it can get expensive.

“While increasing the wage to this level at a fast food restaurant is commendable, I don’t foresee that many businesses will likely be following in their footsteps,” Klosterman says.

Such big hikes in wages are also especially rare in franchised industries, where the headquarters often charges steep royalties and controls many aspects of the operation — including prices and promotions. That can make life difficult for franchisees in areas with higher fixed costs like wages.

“If you’re in a territory where labor is much higher than the rest of the country, you could be underwater,” says Peter Lagarias, an attorney for franchisees based in San Rafael, California. “When these kinds of pressures all build up, you can understand that franchisees are hurting.”

Related: To stay competitive, US call centers are training workers to be super agents

Lagarias hasn’t seen the franchise agreement for Chick-fil-A, which is relatively new to California, so it’s not clear whether an owner-operator could pass along increased labor costs by charging higher prices. Chick-fil-A is unusual in that each owner is limited to one store apiece, which keeps them more involved in day-to-day operations.

A spokeswoman from Chick-fil-A’s corporate office said only that local operators make their own hiring and wage decisions.

However, Mason’s strategy could pay off in the long run.

Research has shown that raising wages can reduce turnover, which in the restaurant industry can be as high as 100% per year. Each time a worker leaves, it costs the restaurant owner money because they then have to fill the shift with someone else.

Mason is also correct to point out that many low-wage workers have to hold down multiple jobs at a time in order to survive, and that full-time work at a livable wage is something many would try hard to keep.

“The reason people leave low wage jobs is that they’re trying to find something just a little bit better,” says Sylvia Allegretto, a labor economist at the University of California, Berkeley.

At $ 17 an hour, Mason’s “hospitality professional” positions could be practically immune from turnover.

“You’re going to try very hard to get that job, and you’re going to be a very good, diligent productive worker,” Allegretto says. “Because if you lose that job, your next job will be back down close to the minimum wage.”

That may position Mason’s store to succeed in what’s rapidly become a job seekers’ market. Sacramento’s unemployment rate tracks the national average, which is currently 3.9%. That’s the lowest rate it’s been since 2000 and it’s expected to keep dropping through 2018.

A $ 17 wage would also allow Mason to be picky with the people he hires, and according to a job description, those expectations are high.

A successful applicant, it reads, “must love to smile & connect with people, make eye contact & speak enthusiastically” and “makes working hard and delivering high standards look easy and effortless, enabling others to be efficient and effortless as well.”