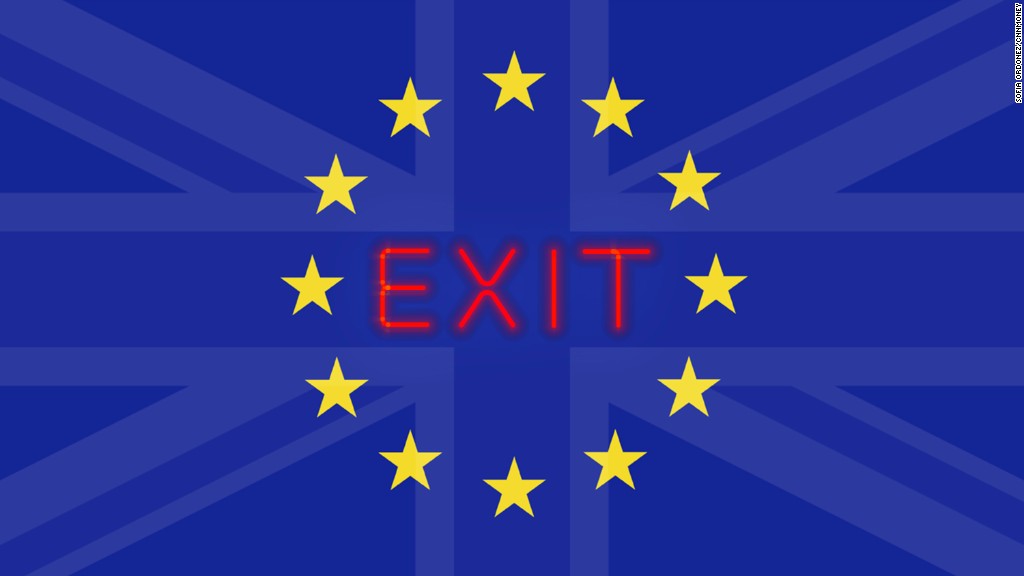 Why Brexit is upsetting Wall Street

The U.K. votes Thursday on whether to remain a member of the European Union, or become the first country to leave the 28-country bloc.

The outcome of the referendum will be known Friday. But if there’s a vote to leave, it will take at least two years, and possibly far longer, for a British exit (Brexit) to take effect.

Why is the U.K. holding a referendum?

Prime Minister David Cameron called the vote in a bid to end years of infighting in his Conservative Party over Europe. He wants Britain to remain a member of the EU, and he tried early this year to convince skeptics by negotiating a ‘new deal’ with the other 27 countries. But many party colleagues still want out, and some are leading the campaign for Brexit.

What are the main issues in the debate?

Leave campaigners say the U.K. needs to limit migration to ease pressure on housing, welfare, jobs and wages. They say that’s impossible to do inside the EU because it insists that people can live and work in any EU country they choose.

Remain campaigners say most EU migrants come to the U.K. to work, and more than pay their own way in taxes. They say closing the door would starve the economy of vital workers, and they point to record low levels of unemployment.

Leave campaigners say British business is stifled by EU regulations and would thrive if liberated from them. They say that the U.K., on its own, could do more trade deals with rapidly growing economies around the world. And they argue that the EU would continue to give the U.K. easy access to its markets because it will want to keep selling to the U.K.

Remain campaigners say leaving would be a disaster for the economy, because it means tearing up the U.K.’s free trade deal with its biggest export market. About 45% of U.K. exports go to the EU. They reject claims that the U.K. is hobbled by EU membership, saying it has grown faster than the region for years, and faster than most developed nations.

What’s the worst that could happen if there’s a Brexit?

A run on the pound. The Bank of England has said the currency may fall sharply in the event of a Brexit vote, and Wall Street analysts have predicted losses of up to 20%. The pound is particularly vulnerable because the U.K. relies on foreign investment to support its economy.

Stock market crash. Risk models suggest U.K. stocks could fall by 24% in the wake of a vote to leave. That’s because investors are worried about the prospects for growth given uncertainty about trade with the EU and as big companies reassess their commitment to the U.K.

Recession. The Bank of England and International Monetary Fund say a vote for Brexit could tip the U.K. economy into recession. The IMF and U.K. government say it would leave Britain permanently poorer. Some businesses say they will review investments in the U.K. and a messy EU divorce would likely make that worse.

Unemployment. The government has warned that Brexit will put hundreds of thousands of jobs at risk. Recession would push up unemployment, and some big companies and banks may also relocate staff to Germany or France to avoid disruption to their EU business.

Tax rises and spending cuts. The U.K. Treasury says the economic shock will blow a hole in the budget, still fragile after the global financial crisis. It says it will have to raise taxes, and cut spending, to fill the gap.

Why should the rest of the world care?

Britain is the world’s 5th biggest economy. A recession would hit global growth, which is already weak and fading.

It would deliver a shock to Europe, still struggling with a fragile economy and high unemployment, and confronting the worst refugee crisis since World War II.

The stock market fallout is unlikely to be limited to Europe. U.S. stocks could suffer because of slower global growth, a stronger U.S. dollar and disruption for U.S. firms in Europe.

Many American companies have their European headquarters in the U.K. They — and other global brands — may be forced to move people and operations to other EU countries to ensure continued easy access to those markets.

Brexit could trigger more political instability in the U.K., and Europe. Cameron may resign, pro-EU Scotland could demand a second vote on independence from the U.K., and anti-EU forces in other countries may gain strength.

China is killing his business. Tariffs could make or break it

June 15, 2018 Admin Comments Off on China is killing his business. Tariffs could make or break it