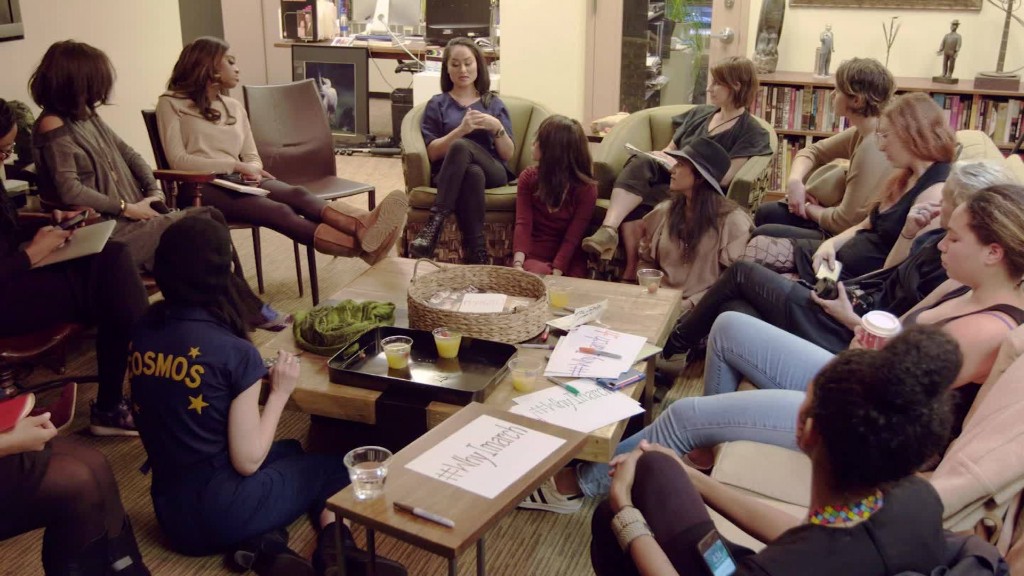 The women behind the Women’s March on Washington

Hundreds of thousands of women are expected to march in Washington D.C. and other cities across the country this weekend to raise awareness of women’s rights and other civil rights issues that many think are being threatened by the Trump administration. The gathering is expected to be multi-racial, multi-ethnic, inclusive of LGBTQ Americans, immigrants and yes, men, too.

But one group in particular is hoping their voices will be heard by Washington: women of color.

Over the course of his campaign, Trump has raised fears about racial profiling, mass deportations and gender discrimination. He called some Mexican immigrants “rapists” and “killers,” boasted about how he could grope women because he was famous and has threatened to build a wall along the border with Mexico and create a registry of Muslims within the United States.

“We are focusing on all women, but we are centering the voices of those who are most marginalized,” said activist Tamika Mallory one of the three women of color co-chairs who is organizing the march with Bob Bland, who is white. “We do not face the same challenges of other communities and now we need to speak up.”

(Race and gender were big factors in the election, with 52% of white women voting for Trump compared to 25% of Latinas and 4% of black women according to CNN exit polls.)

“It’s a courageous conversation, it’s a difficult conversation,” said Mallory who will be marching on Saturday.

Here are some of the top issues she and other women of color who are participating in the march are most concerned about.

“We don’t ever talk about the impact that women of color feel as a result of economic inequality,” said Winnie Wong, a former strategist for the Bernie Sanders presidential campaign and one of the co-authors of the document.

She and other march organizers say they are in support of the Fight for $ 15 movement to increase the minimum wage. During his campaign, Trump wavered in his support of a minimum wage increase, at first saying that wages were “too high” and then later supporting a federal minimum wage to $ 10 an hour.

Related: What about the black working class?

March organizers also list worker benefits and rights as a priority. “All women should be paid equitably, with access to affordable childcare, sick days, healthcare, paid family leave and healthy work environments,” the Women’s March organizers wrote in their principles.

“Women of color are on the front lines of this low-wage work as caregivers, domestic workers, fast food workers. They deserve to be paid $ 15 an hour and they deserve to have healthcare,” said Wong.

Women of color are also more likely to be heads of household or single mothers than white women are, said Tracy Sturdivant, co-founder of the non-profit Make it Work. Sturdivant said she was worried about Trump’s nomination of Andrew Puzder as Labor Secretary because he opposes raising the federal minimum wage to $ 15. Puzder has also been a critic of mandatory paid sick leave, broader overtime pay and the Affordable Care Act.

“He is definitely not pro-worker,” Sturdivant said of the former fast food chain executive.

“Women have been the fastest growing population of people going to prison in the past decade,” said Glenn Martin, the founder and president of JustLeadershipUSA, a criminal justice advocacy group.

And, according to the Vera Institute for Justice, two-thirds of incarcerated women in the U.S. are women of color.

The implications of this trend extend beyond the jail cell. “As women go, so does the family,” Martin said. In fact, 79% of incarcerated women are also mothers whose children are often taken away from them once they are locked up.

Related: Taking the ‘school-to-prison’ pipeline to the stage

Like men, women who serve time in prison often face hurdles to finding employment, housing and financial stability when they come out, said Martin. Many re-entry programs are tailored for men and not women, Martin said.

“A conservative like President-elect Trump who believes in community and the strength of family should recognize that our prison system is the antithesis of those values,” Martin said. “You can’t make America great again when 70 million Americans have a criminal record.”

March organizers and activists fear those numbers may increase at a much more rapid pace under President Trump.

Throughout his campaign, Trump said he would be the “law and order” president and said he supported the controversial “stop and frisk” policing policy, which was ruled unconstitutional by a federal judge in New York in 2013 because it unlawfully targeted blacks and Latinos.

Trump’s decision to nominate Jeff Sessions as attorney general has also deeply concerned activists and politicians. (Sessions was denied a federal judgeship after issues were raised about comments he had made regarding the Klu Klux Klan.)

Martin said he was most concerned about the future of Obama’s executive orders like “Ban the Box” which prevents federal employers from asking preliminary questions about a job applicant’s criminal history and the expansion of federal Pell Grants to prisoners to take college courses.

In 2012, President Obama signed the Deferred Action for Childhood Arrivals (DACA), an executive order that enabled hundreds of thousands of undocumented immigrants to come out from the shadows and get valid driver’s licenses, enroll in college and legally secure jobs. DACA provides temporary protection from deportation to undocumented immigrants who were brought to the U.S. as children — a group known as DREAMers.

But now these DREAMers and other undocumented immigrants are living in fear amid vows by Trump to overturn DACA and crack down on immigration. Trump has also said he plans to “move criminal aliens out day one” and end sanctuary cities that protect undocumented residents.

Between 2003 and 2013, almost all of the 3.7 million people deported from the United States were men from Mexico or Central America. But many of those men were fathers or spouses, making it an issue that affects women and children as well, said Randy Capps the director of research and U.S. programs at the Migration Policy Institute, an immigration think tank.

Related: Why we will help Mr. Trump put people of color first

Capps also raised concerns about the increase in Central American families — mostly women and children — that are crossing the Southwestern border into the U.S., which has increased significantly in the past year.

Immigrants who are seeking asylum could see their requests delayed or denied, said Capps and Trump’s talk of “extreme vetting“ of immigrants and refugees may also “slow the flow” of admission to the U.S., even for those who are trying to reunite with family, he said.

Between Trump’s promise to appoint a conservative justice to the Supreme Court to the recent push by Republicans to defund Planned Parenthood and the impending repeal of the Affordable Care Act, women — particularly those who are low-income or women of color — could see a significant decrease in their access to insurance and reproductive health services.

“Because of persistent wealth and income disparities, women of color are disproportionately more likely to be underinsured, uninsured, or eligible for Medicaid than their white counterparts,” said Louise Melling, legal director of the ACLU.

The Affordable Care Act has helped close some of the gap. The health care reform law made it possible for millions of people who don’t have insurance through their job or elsewhere to get coverage. Under Obamacare, things like birth control, mammograms and care for a newborn are considered preventative care and must be covered.

Trump has made the repeal of Obamacare a signature part of his campaign promise which, if implemented, could remove coverage for a slew of these women’s health services.

“We do not accept any federal, state or local rollbacks, cuts or restrictions on our ability to access quality reproductive healthcare services, birth control, HIV/AIDS care and prevention, or medically accurate sexuality education. This means open access to safe, legal affordable abortion and birth control for all people, regardless of income, location or education,” the Women’s March site states.

Trump asks Japan to build cars in the U.S. It already does

November 6, 2017 Admin Comments Off on Trump asks Japan to build cars in the U.S. It already does

October 29, 2017 Admin Comments Off on JCPenney warns: Losses are growing